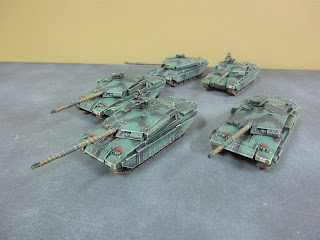 Fresh off the painting desk I've got a squadron of beastly British Challenger tanks from Battlefront's Team Yankee range. 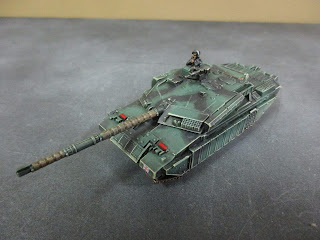 I painted these in the same style as my Chieftains. Basecoated Catachan Green, highlighted extensively with Vallejo German Uniform. Camo painted with a mix of craft black and Mechanicus Standard Grey. The tank was washed with thinned Nuln Oil, then the green was re-done with German Uniform. Drybrushed all over with Ushabti Bone, then dusted up with the same. Tool handles painted Skrag Brown, machineguns and shovel blades done with Leadbelcher, fire extinguishers in Mephiston Red. 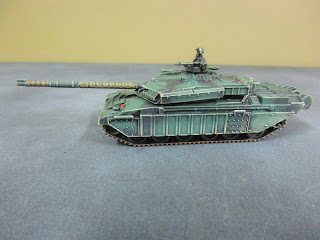 Each of the five Challengers in the box can be assembled as standard or with the upgraded ROMOR armour pack shown above. 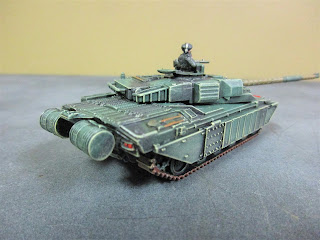 You also get enough alternate fuel drums to outfit the unit with those as well. 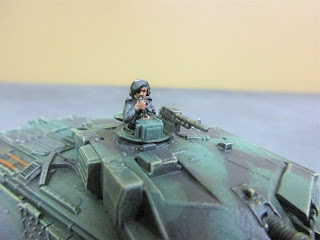 Three crew figures are included in the box as well. 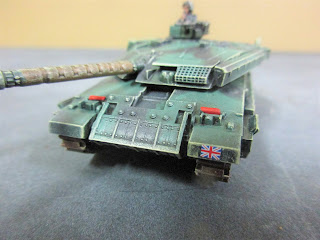 As well as the alternate track skirts, you also get the ROMOR front hull armour add-on. No decals included with the box though. The Union flags were from my spares box. 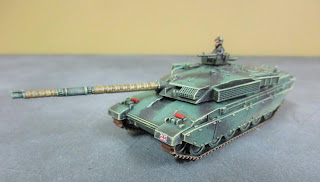 Here's the standard armour configuration. Note track skirts and lack of reinforcement on the front hull. 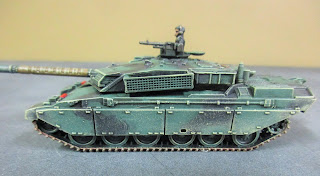 Here's a closer look at the skirts. 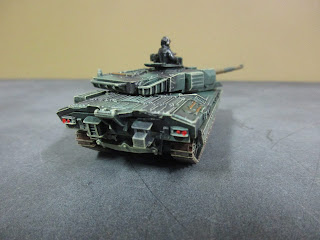 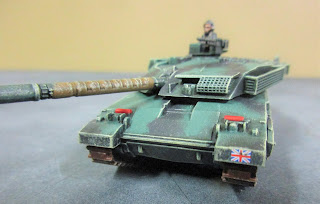 ...and plain front end. I'm thinking that the Challys will be a useful addition to my British force. They're certainly worth a bucketload of points but they should be, with a front armour rating of 20 (standard) and 21 (ROMOR) and an anti-tank factor of 22 for the main gun! 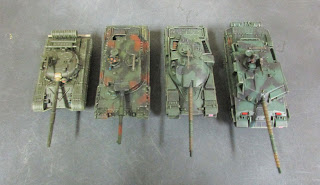 The Challengers are BIG... from left to right I've lined up a T-64, Leopard 2, Chieftain, and Challenger. 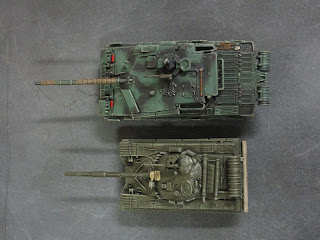 Crazy how much bigger this thing is than a Soviet T-64. Length of the Soviet tank hull is 6.54m vs. 8.33m for the Chally... looks about right I guess. 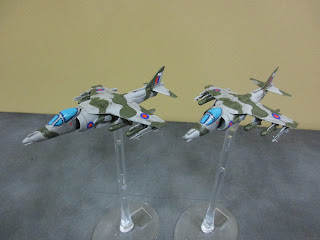 As if the Challengers weren't enough of a force multiplier, I also painted a pair of Harrier ground attack aircraft. 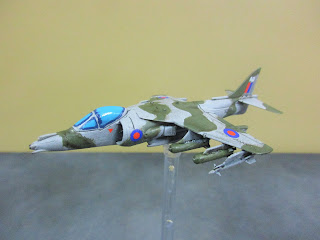 These are also from Battlefront... sort of. These are the new plastic kit Harriers that have replaced the previously offered resin kits. Good on Battlefront for offering plastic kits at a lower price than the old resin box, but that's not really the end of the story. The fact is that the new Battlefront Harriers are just repackaged sprues from "Ace Corporation". It's kind of funny actually... the sprues include landing gear and other parts that aren't even referred to in the Battlefront assembly instructions. 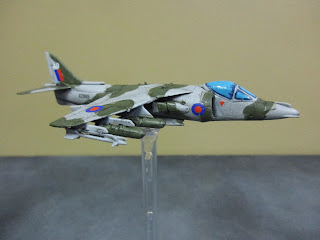 The box comes with a nice decal sheet though, including extra serials, tail flashes, and even roundels. 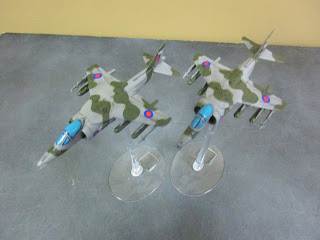 These two chaps should come in handy... being jump jets they can shoot at helicopters (!) and arrive on a 3+ each turn (!!) 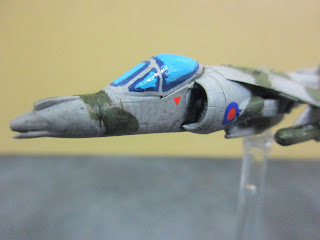 Heh... another funny thing about the "Ace Corporation" sprues is that the canopy was obviously meant to be clear in the original (it was on a separate sprue from everything else) but in the Battlefront version it's cast in the same grey plastic.

I was thinking about getting some SU-25 Frogfoots for my Soviets and note that there are new "plastic kit" versions of those available from Battlefront now too... guess who makes a 1:144 Frogfoot kit? You got it, Ace Corporation.

The Challengers and Harriers look great - no surprise the British tank looks so big alongside the T64 - Russian tanks are notoriously small and cramped... maybe the newer ones - what are they up to now, T90?? - are a bit bigger....

Looks great! I love how each nation learned different lessons during WWII that influenced tank design. The British were traumatized by their use of light armoured and under gunned tanks and basically created a Baneblade in response.

Kind of a funny switcheroo on the aircraft models...their previous resin and metal combos were quite inferior, especially considering the price. These Harriers sure look sharp! Good luck with the Frogfoots...

Terrific looking aircraft and armour, Dallas! I particularly like those Challengers - what beasts!