Here's another one from the vault... a Fuman (nee Bandai) 1/48 88mm Flak 18. I was inspired to get this done by seeing Conscript Frederick's work on his kit here. As noted in his post I was rather intimidated by both the complexity of the kit, and the poor quality of its injection-molded plastic parts. 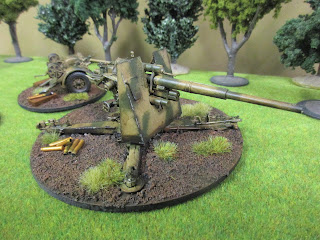 Needn't have worried too much though as the kit went up in a couple of evenings - basically one night for the gun and another for the caissons. Similar to Frederick's build, I fixed the elevation of the gun in an "anti-tank" role but assembled it to permit rotation. 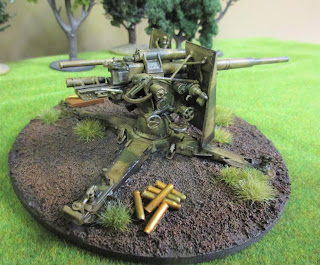 I figured I would paint the piece in mid- to late-war camo as a contrast to Frederick's early-war gun. The weapon was based on a 120mm (basically CD-size) base kindly provided by Conscript Byron of Northern Lights Terrain. The one great thing about the Fuman kit is that it includes a shed load of 88mm shells and empty shell cases, which come in very handy as base decoration. 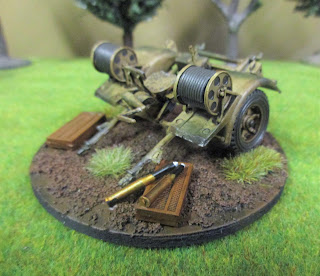 One half of the supplied caissons... 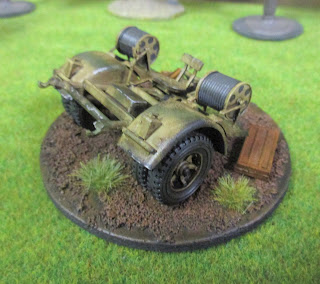 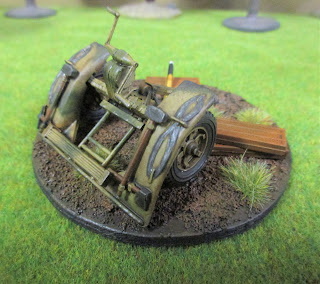 This one presented a bit more of a challenge in figuring out how it would look "at rest" as opposed to hooked up to the gun. 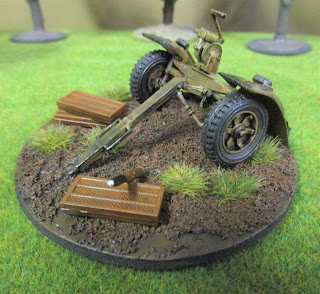 The gun was painted in a simple camo scheme, based on a model painted by Sascha Herm for Rubicon Models' 1/56 88mm AT gun kit. I love Sascha's work on the 88 but the weathering is pretty extreme, so I toned it down quite a bit for my model. 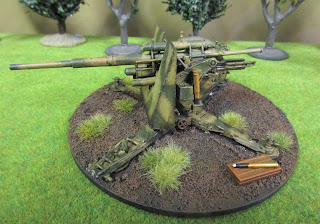 For the dunkelgelb I used GW's Zandri Dust over a basecoat of XV-88. The camo green is GW Castellan Green, the whole thing liberally washed with Agrax Earthshade. 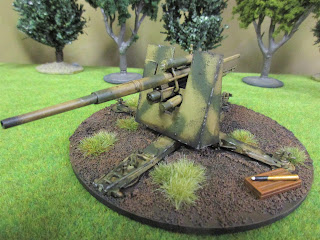 The shell casings were painted GW Retributor Gold, which I think looks good. The wicker shell boxes are Skrag Brown. 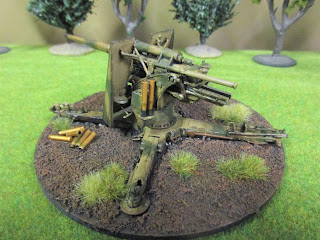 I also did some sponge chipping and scratches. Just a close-up shot here of some of the kit detail. 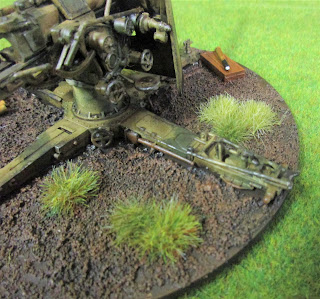 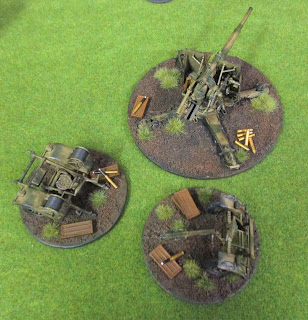 Unlike Frederick's build, I didn't put crew on the bases - for one thing, because I don't have any dedicated crew for the gun... yet. Metal crewmen are on the way from Warlord for that. However I'll leave with one pic of the gun with a crew member. 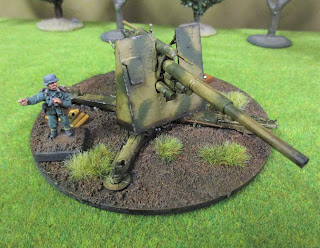 I have to say it's great to have this model finished... it's probably been sitting in the kit box on the shelf for over 10 years. Once the crew gets here they'll be a snap to paint, and then it'll be time to get this 88 where it should be - blowing up Shermans and T-34s!
Until then, stay healthy friends...
Posted by Dallas at 3:13 PM

Looks great, Dallas. Happy to have provided some inspiration to get it done.

Brilliant work Dallas - congrats on getting this beast built and painted!