When Bolt Action miniatures arrived on the wargaming scene, they were basically a line of figures, and appropriate vehicles in 1/56 scale were few and far between. Many of us turned to 1/48 Tamiya, Bandai or Fuman plastic kits, or 1/50 Solido or Corgi diecast vehicles to fill the gap. In fact, Bolt Action actually produced sets of British and German drivers and passengers that were designed to be compatible with Corgi jeeps and Kübelwagens. Since they now produce their own wide variety of suitable vehicles, these sets are now out of production.

I had managed to snag four of the Corgi Kübelwagens off of eBay at a discount price as they were already out of the box, and one was missing its folded roof. I had also purchased a set of the German drivers and passengers (two of each) but after priming them for painting, they ended up on a back burner until now.

I also had a female Soviet driver figure that had been mistakenly shipped with a set of Bolt Action Flak crew instead of the seated aimer it was supposed to contain, so a captured vehicle in Soviet use would make an interesting version for the third one.

The last Kübelwagen got a driver made using the body of a seated Panzer crew driver from a Bandai kit with his head replaced with a spare head from the Bolt Action Flak crew set, and the Panzer wrap converted to a standard tunic with epoxy putty. I also had two spare stretchers that came with some sets of resin tank stowage, so I decided to make an ambulance version. Leftover decals from some Schützenpanzerwagen kits provided the red cross emblems as well as a variety of license plate numbers to add some extra details. 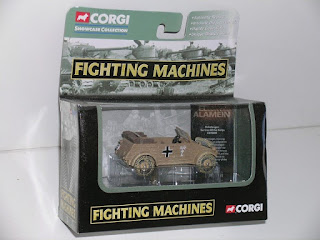 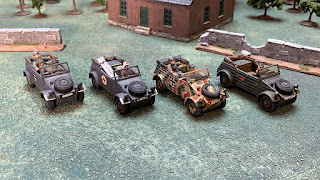 My quartet of converted VW Kübelwagens: two early war (with one being an ambulance), one late war, and one captured vehicle in Soviet use. 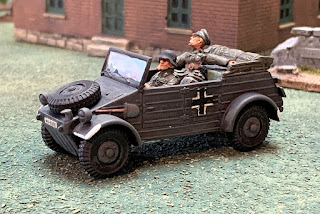 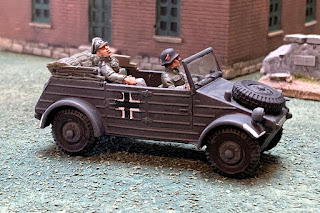 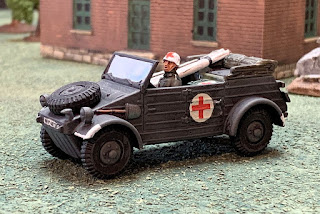 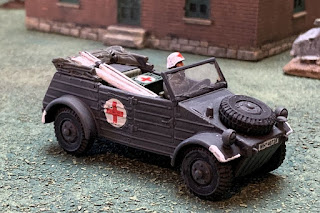 Kübelwagen ambulance, with the driver converted from a driver left over from a Bandai StuG kit 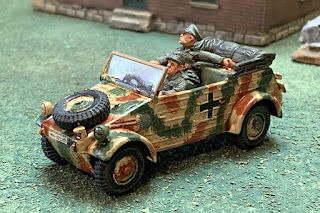 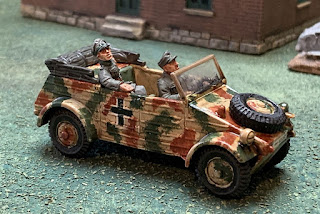 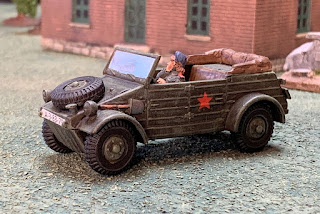 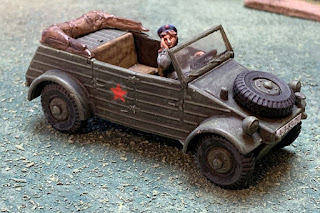 Captured Kübelwagen in Soviet use with a Bolt Action female driver and a scratch built folded back roof.
I am happy to finally get these cleared from the IN basket, and I am particularly satisfied with the way the ambulance version came together with the use of spare bits and bobs from other kits and projects. I guess being a pack rat pays off on occasion.
Posted by Dusty at 2:57 PM

They look superb. May bortow the idea for a captured Soviet kubelwagon