The backlog of WW2 Germans in my 'IN' basket is almost cleared with the completion of this latest batch of miniatures. These are Bolt Action figures sculpted by Paul Hicks, and predate the acquisition of that line by Warlord Games. They are examples of 'Heroic' style 28mm figures with the detail standing out in 'high relief', which I found made them easier to paint things like piping on the shoulder straps. They include one MG42 MMG team, two MG42 LMG teams, four soldiers armed with Gewehr 43 semi-automatic rifles,  and four tank hunters consisting of a Panzerschreck team, and two soldiers with Panzerfausts, one also carrying a Teller mine. To finish things off, there are four MG gunners designed to stand inside a Schützenpanzerwagen Sd. Kfz. 251/1 half-track, two with MG34s and two with MG42s. There is a nice mix of late war German uniform details such as camouflage helmet covers and smocks, as well as many wearing low boots with Gamaschen. Three of the tank hunters also sport tank destruction badges (Sonderabzeichen für das Niederkämpfen von Panzerkampfwagen durch Einzelkämpfer) on their right sleeves.  I really like the animation and the uniform variety. which give the impression of hardened veterans in Normandy or during the long retreat from the Soviet Union.

Unfortunately, all but one of these figures are no longer in production, having been superseded by Warlord Games' line of plastic Bolt Action 28mm miniatures.

To paint these I used Vallejo paints with some different ink washes used on the gas mask canisters or the Splittertarn clothing items to get the right look, and then the whole figure was painted with Army Painter Strong Tone Quickshade. They were finally given a light spray of matt finish. 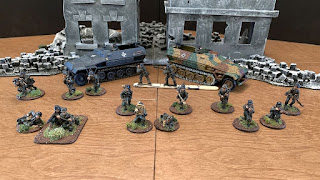 A group shot of the late war Germans with some of my scratch built ruins in the background. 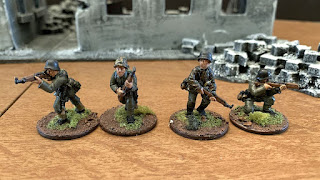 Four German Grenadiers armed with G43 semi-automatic rifles. They provide some nice variety to the look of my late war Germans, but the G43 counts the same as a regular rifle in the Bolt Action rules. 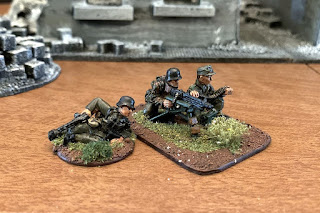 Three man MMG team with MG43 on a tripod. The team commander is carrying a captured Russian PPSh-41 submachine gun. 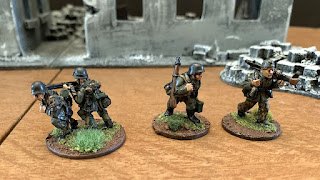 Two LMG teams, one firing and the other on the move. The No, 2 in the firing team is wearing a Zeltbahn over his tunic, while the No.1 in the team on the move is wearing a pair of unofficial Splittertarn trousers. 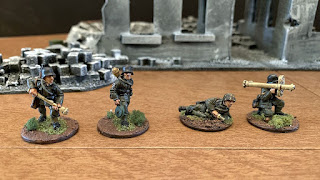 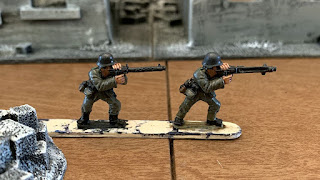 A close-up of two of the MG gunners for the back of the half-tracks, armed with MG34 (left) or MG42 (right). I have since mounted all four on squares of plastic card so they will stand up better in the back of the vehicle. Only the figure on the right is still available from Warlord Games. 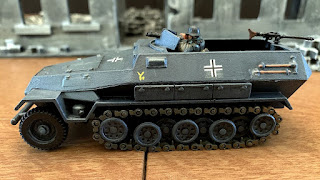 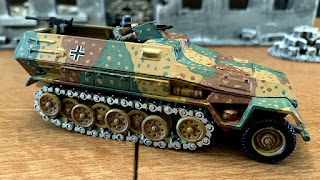 It's too bad about the figure availability. I really liked the old metal lines.

great stuff, some of the early figures were quite nice.

Great work! Quite the streak of pandemic painting!