The lockdown produces some strange hobby obsessions, to be sure... in this case it's resurrected an ancient collection of 1/72 aircraft that (I think?) the group gamed with once, long ago. In digging around for some other hobby stuff I came across two unbuilt kits from that long-ago time, so on a lark I decided to build and paint them! 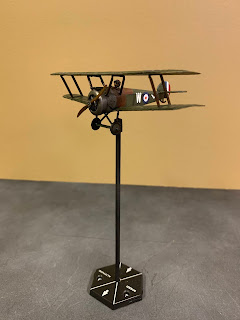 This is an Academy 1/72 Sopwith Camel, price on the box was marked "$3.25" (!) Flight stand is an excellent Forgeworld example that they produced for Aeronautica Imperialis, years ago. 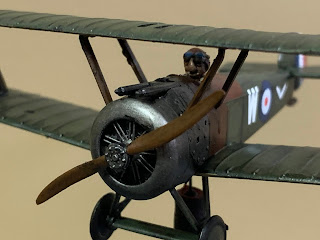 Pilot with the Groucho Marx nose was sculpted by me, and provides the opportunity for a mini-rant. WHY OH WHY do plastic kit manufacturers produce model aircraft with open cockpits and NO PILOT??? It would drive me nuts to have to game with a pilotless Camel so I kneaded a pilot out of greenstuff. I know he looks terrible but at least there's a body in the cockpit. 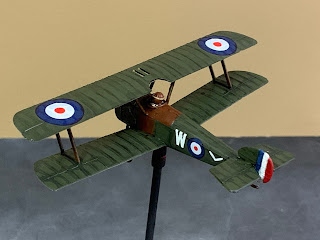 Can't say much for the kit, I think it was less than 30 parts. Decal sheet was atrocious though - there was a decal provided for the tri-colour rudder but the colours were in the wrong order, so I had to paint it instead. 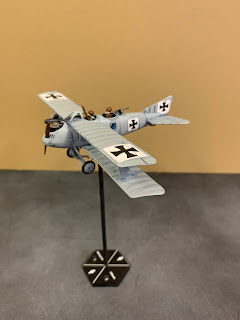 This is a Heller 1/72 Roland C.II. It's a pretty cool-looking aircraft that was known as the "Walfisch" (whale) due to its peculiar streamlined shape. 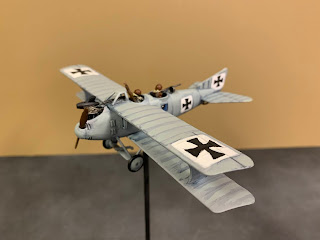 Unfortunately I'd already raided the decal sheet years ago to use the crosses on a Games Workshop Shadowsword, so I had to freehand the crosses on the Roland. 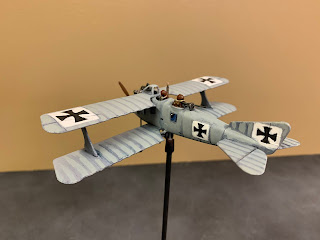 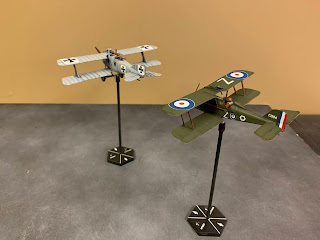 Roland pursued by SE-5. Did you know that Albert Ball's first aerial victory was over a Roland C.II? I'm sure you did...

Anyway, there's two more dusty old kits built up. Of course, building and painting the Camel and Roland reawakened my passion for Great War aviation so I promptly went out and bought three more Roden kits to build - another SE-5, a Bristol fighter, and a Fokker D-VI. They were 25% off even! We'll see how long they last in their boxes. I'm currently reading "Canvas Falcons" as well so that should keep the juices flowing.

Tally ho and stay safe!
Posted by Dallas at 4:39 PM

Nicely done aircraft! I honestly thought the crosses were decals or preprinted before I read you free handed them. Nicely done.

Nicely done there! Those hand-painted crosses look fine, I experienced a similar thing myself but ended up building an painting WW2 aircraft for a long-lost rule set.

Love them mate, a great looking pair of builds.

A big fan of 1/72 aircraft myself, and I must have 20 of them in my collection. For pilots I commissioned wartime miniatures to make some 1/72-20mm ww1 pilots, five varieties were made in metal. I purchased 30 of them and some have made it into ww2 aircraft also.

Well they all look marvellous to me! Now feeling the need to start a model kit!

Great work Dallas - not only on freehand painting, but on making your own pilot! That is really cool. Well done.

Thanks guys! Matt - thanks for the tip on Wartime Miniatures. I'd never heard of the company but their 20mm WW1 pilots look great, I'm going to order some!