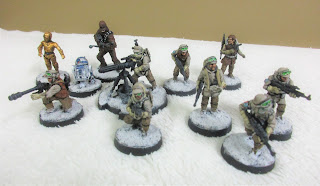 Well, Legion escalation continues unabated as I work through the small hobby-shop's-worth of boxed sets piled up on the sideboard. Today it's the turn of some more Hoth Rebel Veterans (and one unlikely addition) to be shown off - along with some old terrain. 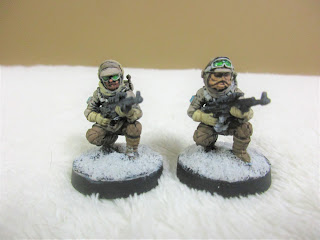 You've seen all of the Hoth Rebels I've painted before, and these ones are very similar. I did, however, swap one head - the Sullustan's - just for the sake of something different. Here are the two versions of the crouching Rebel trooper, with different heads. I may repaint the top half of the Sullustan's face to look a bit more grey. 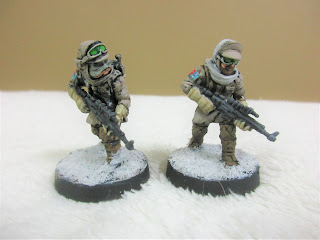 And here's the other trooper with swapped head. Although Sullustans are described as "diminutive" they apparently range in height from 1 to 1.8m and this one is a regular human-size, unlike his famous compatriot Nien Nunb who was noticeably shorter than the average human male. 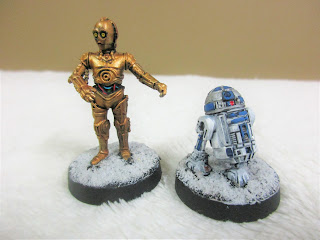 Gotta have droids! Unfortunately the hero droids are only available in an expensive box set with a crashed escape pod (currently on the painting table), but they're still a must to pick up. I'm pretty happy with how they turned out. 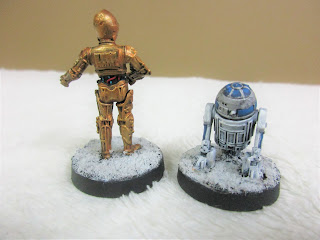 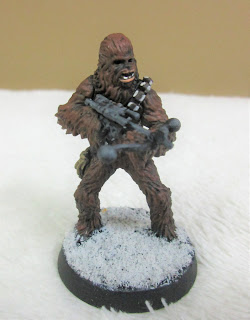 The Legion Chewbacca is a great model as well, and obviously a snap to paint! 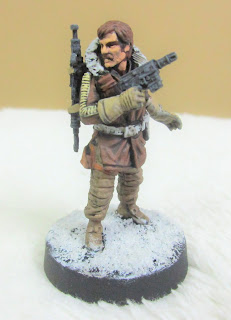 Here's the oddball - Cassian Andor painted as a generic Rebel commander. The box set of this model and K-2SO seems purpose-made for Hoth - Andor is wearing a parka and cold weather gear, and K-2SO can stand in as part of the Blizzard Force. I decided to paint Cassian with a brown jacket as an homage to Han's original screen garb. 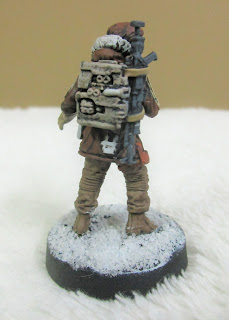 I also added a Hoth backpack with slung rifle in place of Cassian's supplied gear - the backpack was an extra that came with the Rebel Radar Laser Cannon, I think. Fantasy Flight's error worked out well for me. In any case he'll fit in nicely as a commander-type for the Hoth Rebel force.

I also tuned up the paint on some of these WotC laser turrets that I got for the old Star Wars Miniatures Battles game. I had to replace the bendy gun barrels (used a ballpoint pen refill) but I think they look OK with some weathering, and the size is not bad either. 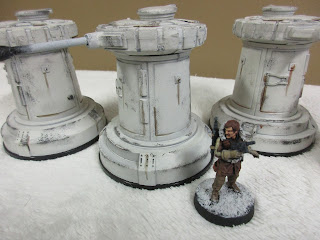 These should work OK eh! Plus it's always nice to update and reuse models that are in the collection already.
Next - more Imperials!
Posted by Dallas at 11:42 AM

I look forward to you running a Hoth themed Star Wars (LotR!) game.