Here are two Alpha Legion Contemptor Dreadnoughts I completed this week. The Contemptor Dreadnought is a must for any 30k army. It's one of those iconic units that immediately separates a 30k army from a 40k one. This is especially true when they are the legion specific models designed by Forgeworld. I got two of the legion specific dreadnoughts for the Alpha Legion a while ago and finally finished them this week. No transfers were required as they are already covered in chapter icons. I gave them the usual paint job, but painted the hydra symbols on the chest with a different wash. They are also armed differently. One is armed for close combat with a chainfist / meltagun and a multi-melta. The second is armed with dual Kheres Assault Cannons! I wanted him posed like he's letting loose with both cannons while bracing himself from the recoil. I doubt that would be necessary giving what one of these things must weigh, but I imagine the space marine pilot inside retains some of the old behaviours and habits he had in his mortal life. 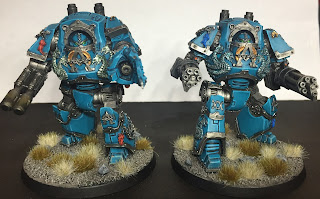 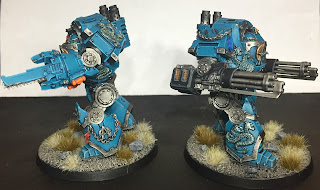 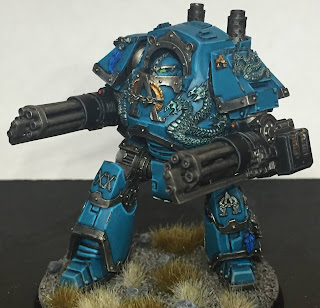 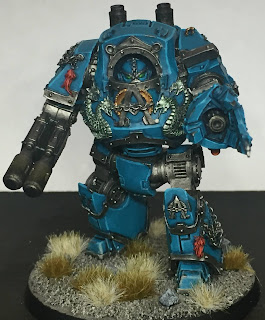 Posing a Contemptor is itself an artform. The various components that make up the foot, lower leg, upper leg and hips offer a variety of positions, but also tend to produce a stance that is either too narrow (looking like it's prancing) or they're sticking one leg forward in an odd looking swagger. These are by far the best poses I have ever built for the contemptor and I have been unable to achieved similar results before or after these guys. Thanks for visiting.
Posted by MFraser at 3:58 PM

These are fantastic Mike - just great. And well done with the posing...my efforts to give Contemptor Dreadnoughts a dynamic pose consistently come up short, so I am envious. Well done!

I agree- the posing is great as is the painting.