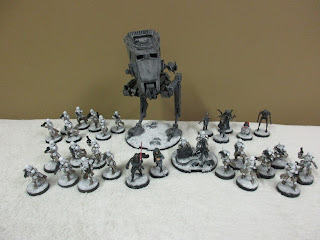 Hey all, just popping in with a pretty big update for my Star Wars Legion "Hoth" project. Basically I've finished all of the Imperial models I have on hand so just wanted to post on that. My little component of "Blizzard Force" is pictured above. 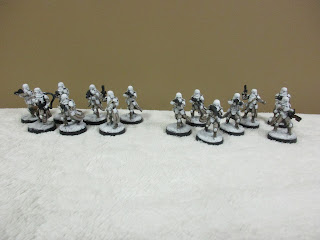 Part of the update is just Snowtroopers - two more sections are complete, making three sections for the Snowtrooper platoon! (I have another seven-trooper section on the way - those are custom 3D prints that I'm really looking forward to painting). These ones are done in the standard style - cloth bits Rakarth Flesh washed with Agrax Earthshade, then re-highlighted with Rakarth Flesh, and white bits Corax White highlighted with White Scar. So easy and simple. 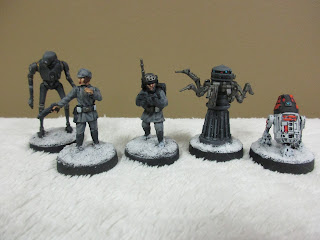 And while I'd posted the Imperial officer and comms trooper before, I finished the medical droid and astromech to complete the support section. 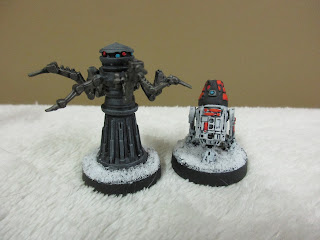 Here's the medical droid and astromech. 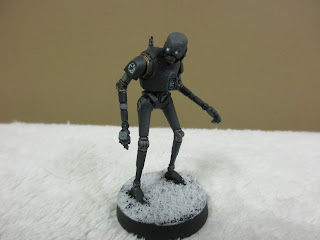 Another addition to the support section comes from the "Cassian Andor and K-2SO" box, in the form of this KX-series security droid. 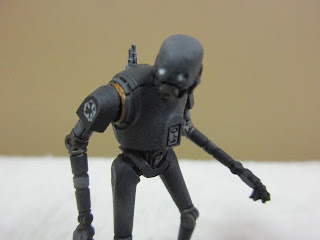 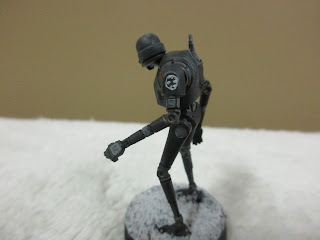 Rather than fit the arms from the rogue droid K-2SO's appearance in Rogue One, I set the droid up "unarmed" as I assume that's how it would normally appear. 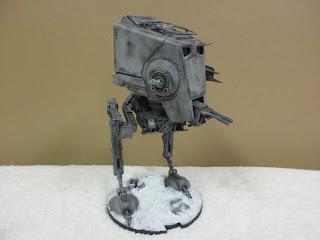 Lastly, I finished the Legion AT-ST. What a superb model this is. So easy to assemble (it comes already partially assembled from the "factory") and super-detailed - it's just awesome. 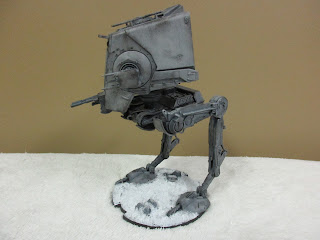 I equipped the model with the optional light blasters on the LH side of the crew capsule and the concussion grenade launcher on the RH side. 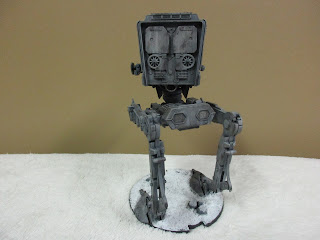 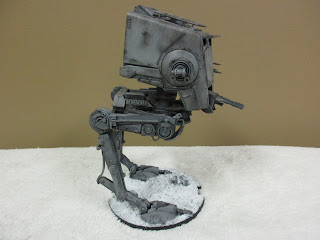 Painting was pretty straightforward - basecoat of Mechanicus Standard Grey, highlighted with Administratum Grey and Dawnstone. I did some streaking with Nuln Oil in a different sort of technique - I loaded a large brush with Nuln Oil and dried most of it off, then brushed it downwards to simulate some kind of water streaking. I also applied Nuln Oil to joints and on the legs before lightening it all up a bit with some drybrushing. 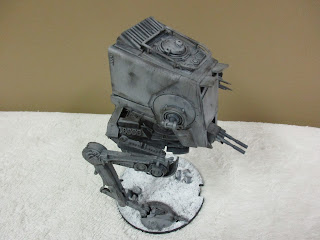 Then I went over with the sponge chipping to create some wear and a bit of blaster damage.

So that's Blizzard Force nearly done, except for some custom 3D-printed goodies that are on the way. I think I have enough models painted now to have a game, so I'll try to put something together on that front in the next couple weeks!

Some excellent painting. I think the security droid is my favourite- I really like the pose- and the weathering on the AT-ST looks great.

Brilliant work Dallas - looks awesome, and that AT-ST - so cool!!

Great looking Imperials! What rules are you considering using?

Thanks Dave. Probably LotR as we've used it for everything else - plus the M, W and F system seems like it would suit SW.

Hey Dallas, maybe we could come up with a Chain of Command variant? Just imagine how much more pointlessly complicated we could make the "patrol phase" if we factored in Force Powers? :-)

Looks awesome Dallas! Are you planning to do any “snowy” Rebels?