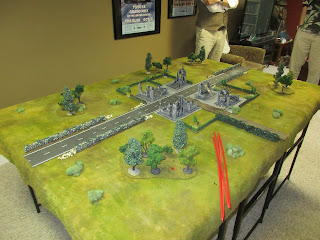 So last week I hosted an in-person game here at Conscript Towers - Bolt Action. I'd been wanting to do an early-war game for some time, so I picked a likely-looking scenario out of the early-war Bolt Action book, Germany Strikes!. This was the Battle of Stonne, basically a meeting engagement coincident to the battles for Sedan. The tabletop is pictured above - village of Stonne at centre with the long table edge at the top of the photo being North. The French entry is along the south-west, south of the east-west road and west of the north-south road, while the Germans enter along the short eastern table edge. Victory would go to the side that held the crossroads, with no enemy units within 6". 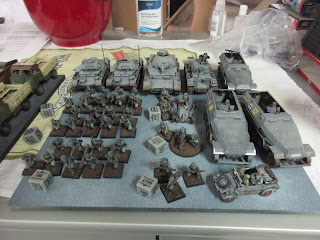 German forces: three sections of infantry each in a Sdkfz.251/1, one Pzkpfw. 38(t), two Panzer IIs, one Panzer IV, one MMG team, one 37mm AT gun and crew, led by a Hauptmann (captain) and command section in a Kubelwagen. 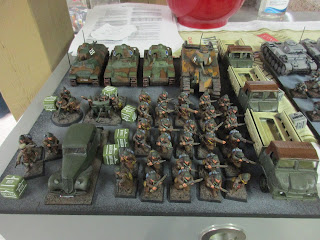 French forces: three infantry sections each in a truck (models are Solido Simca-Unics), one Somua S35, two Renault R35s, one Char B1 bis, one MMG team, one 25mm AT gun and crew, led by a Capitaine and command section in a light civilian car. 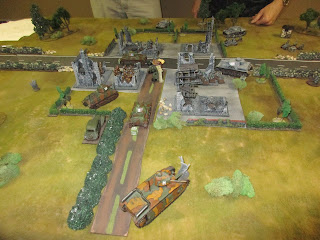 The French force quickly moved onto the table on the southern road, trucks with infantry in the lead. 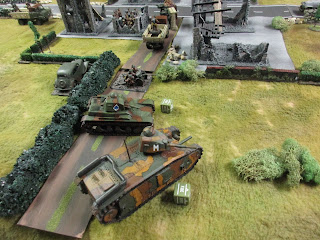 The French tanks and AT gun turned to face off the German Panzer 38(t) just out of picture to the right. The French blazed away at that tank for several turns but the dice had abandoned them - or maybe the crews skipped gunnery practice?? 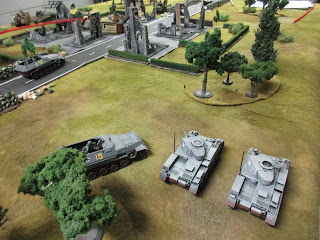 To the north, the Panzer IIs and Sdkfz. 251 moved around the village. 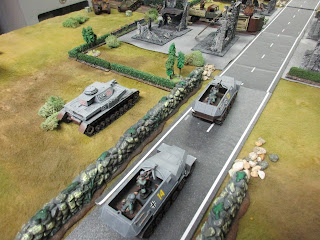 The rest of the German force moved directly towards the crossroads at the centre of the village. 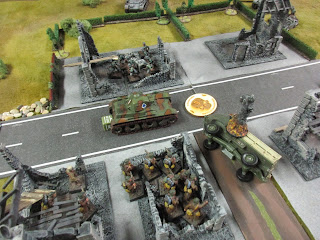 The Germans moved into the village from the north and east, and methodically began to clear the buildings of French defenders, assisted by some hot rolling. Meanwhile the last French R35 rolled into the crossroads to prevent it being taken by the Germans. 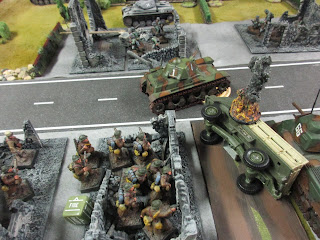 View from the south. The Germans have taken the buildings to the north of the road; Panzer II manoeuvering around the buildings. 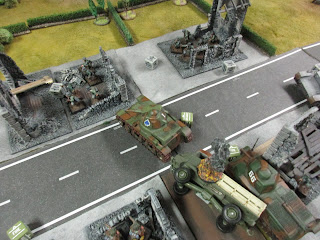 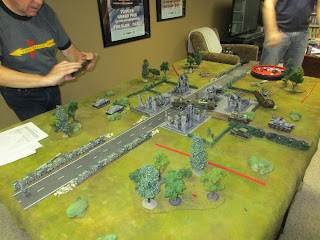 And that's how the game pretty much ended - victory conditions were a draw, as neither side had clear undisputed control of the crossroads. As far as tiebreakers, the Germans were ahead, as they destroyed far more enemy units than the French had.
Early war games are an interesting challenge for both sides. French tanks are heavily armoured (making them hard to kill by German AT) but they also have weak AT guns and are slow. German tanks are relatively lightly armoured and also have light AT weapons, but are faster and more manoeuverable. The problem with this scenario is the emphasis on the crossroads as the victory location - this draws every single unit on the board towards that location and reduces the potential for movement. This game was fun though - it was great to get all the early war stuff out again (including the newly painted early war German infantry) and see the boys for a game. Until next time!
Posted by Dallas at 4:49 PM

Looking good. Nice to see an early war scenario played out and with such smart stuff. Loved the infantry and vehicles. Obviously a lot of effort went into them. Hope you do more of this. Maybe you could do a series or even campaign now you've such nice gear to play with. Well done and good luck.