Team Yankee escalation continues with some Soviet aviation - a pair of Sukhoi SU-25 Frogfoot ground-attack aircraft from Battlefront (TSBX20). Greg painted a couple of really nice Frogfoots (Frogfeet?) a few years ago, and since Battlefront's come out with an updated (and cheaper!) iteration of the models that I've just finished, a bit of a compare-and-contrast might be in order. 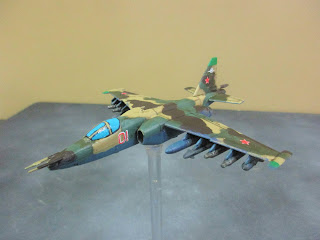 First of all, these are the latest and greatest SU-25s from Battlefront. While Greg's planes were resin, these are injection-molded plastic model kits. Like the Harriers I posted a short while ago, I believe that the sprues themselves were procured by Battlefront from a third-party manufacturer, Ace Corporation. However, while the plastic injection sprue includes drop tanks, rocket pods, and bombs, the Battlefront box also contains a sprue of resin KH-25 (NATO: "Karen") air-to-ground missiles. 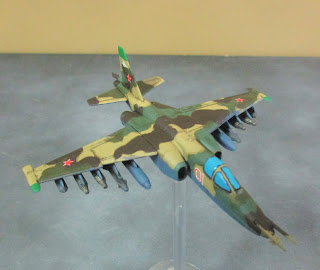 I elected to assemble the models as they would appear at the start of a sortie, with all 10 hardpoints filled with weapons. From inboard to outboard (fuselage to wingtip) they are: drop tank, KH-25, rocket pod, rocket pod, bomb. The canopy that's included is molded in the same grey plastic as the rest of the parts so I've painted it to match the rest of my aircraft. Speaking of paint, for the record I used Zandri Dust, Rhinox Hide, Castellan Green, and Vallejo German Uniform for the camouflage, washed Agrax Earthshade and re-highlighted Zandri Dust with some panel lines put in with Nuln Oil. The underside was painted with Mechanicus Standard Grey highlighted with The Fang (ugh) and Thunderhawk Blue. The canopy was done with Kantor Blue and Temple Guard Blue. Wingtips are Warpstone Glow. Rocket Pods are Leadbelcher washed with Nuln Oil. 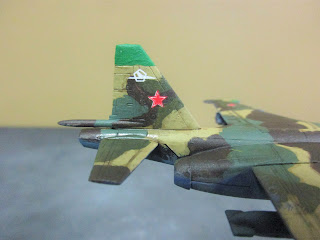 The box comes with a full decal sheet as well, including these funky little flashes for the tailplane. 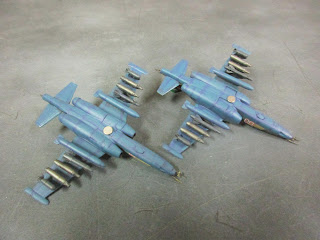 While the box instructions advise modelers to affix a provided clear socket to the underside of the fuselage, I elected to use magnets. The one advantage of the resin planes was that there is a recessed slot molded in to accommodate a magnetized stand, whereas the injection kits have no such feature.

All in all a pretty nice box set and should come in handy in games of Team Yankee. Can't argue with the price point either - $39 CAD compared to over $60 CAD for the old resin box set. The only downside of the injection kits is a slightly more fiddly way to mount them to the flying stands - but I'll take that tradeoff for $20 per box. Plus most of the weapons are injection molded and perfect - no worries about the crappy resin ordnance that plagued Greg in his build.
Onward to the West!
Posted by Dallas at 10:17 AM

Great work Dallas! I love the heavy weapon load, and the overall ominous profile of the SU-25...such a scary-looking aircraft. The brave Red Army soldiers and their revolutionary allies will welcome the aerial suppression of the capitalist running dogs!