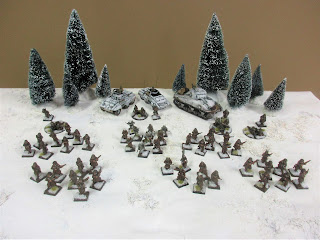 Well, it's Thanksgiving weekend here in Canada and last year at this time, we had a foot of snow on the ground... thankfully it's pretty nice here still this year (I cleaned the leaves out of my house gutters today) but we know that winter is just a matter of time. 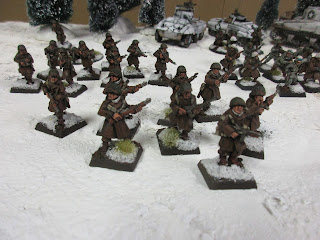 When I posted about the Solido M20 Command Car and winter Sherman I threatened to post again with the entire army, and it's only taken seven months :-)  Most of the infantry are from Artizan Designs. 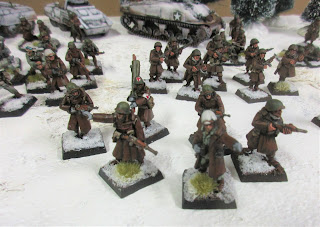 These are supplemented by a command squad from Bolt Action, that I've posted about before. 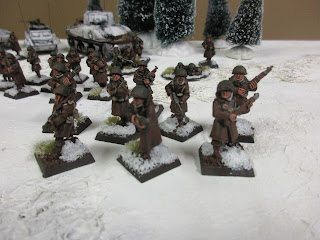 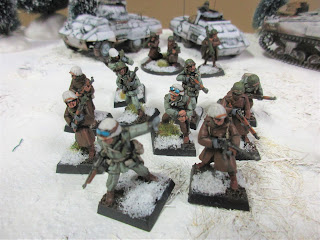 I also augmented the Artizan troops with a veteran Bolt Action squad. All of the models in the army are metal. 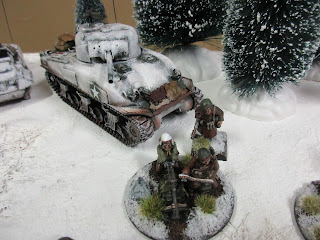 Lots of .50 cal. "Ma Deuces" in the force... along with one tripod-mounted HMG, there's also one on the Sherman, one on the M20 armoured car, and one on the Greyhound. 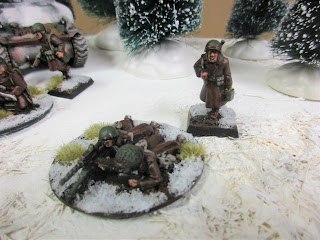 A couple of Artizan .30 cal. MMG crews in the force as well. 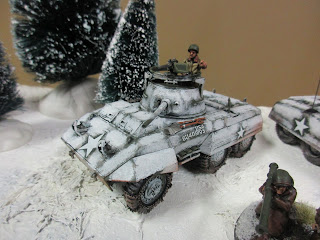 The latest addition prompting this post is the completion of this Tamiya M8 Greyhound. 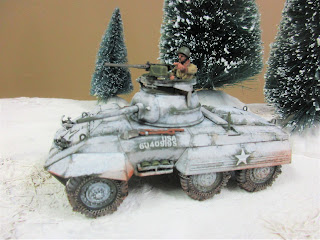 Turned out pretty good. I also added resin wheels and tirechains from Black Dog (blackdog.cz), a manufacturer based in the Czech Republic. The fit was absolutely flawless and a really easy conversion to make. 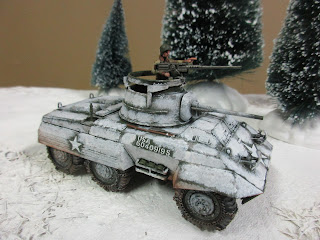 I left off securing the front and rear fenders to the model until after I'd painted the wheels. The paintwork was done the same as on the M20 and Sherman - Catachan Green basecoat, Rakarth Flesh stipple followed by White Scar. Done! 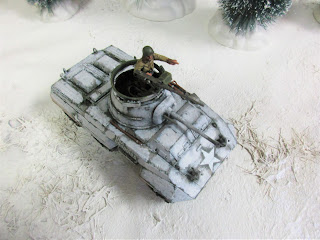 The crewman required a bit more thought. The crew model was supplied in the Tamiya kit but the pose was kinda boring - just holding a pair of binoculars in front of his chest. So I pinched a pointing arm from a handy Bolt Action plastic US Infantry set and added that. 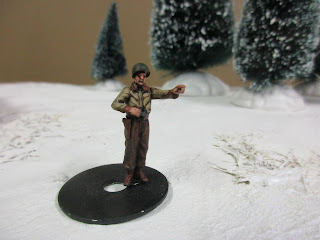 Now, how to secure him in the turret? Magnets to the rescue of course... I superglued a 5mm rare earth magnet to the crewman's feet... 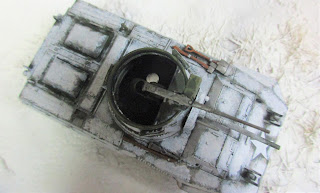 ...and stuck a corresponding magnet on the top of the seat in the bottom of the turret (see next pic) 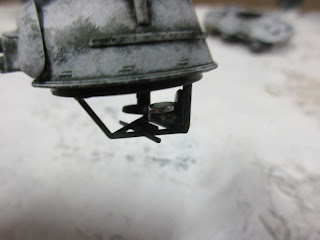 You can just see the magnet on top of the seat in this pic. It actually worked really well; the crewman stands up nice and straight and is quite secure. 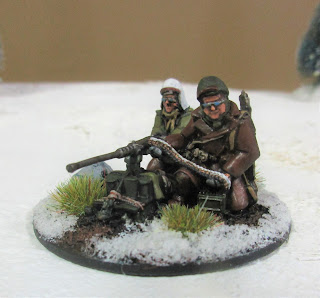 A couple other models added to the army... first a .50 calibre machinegun team. This one is from Warlord's Bolt Action range and is actually a weird little set. You get these very useful crewmen for the .50, but the pack also contains two other oddballs, one of which is warming himself over a fire (!)

I haven't painted the other two models from the pack yet. 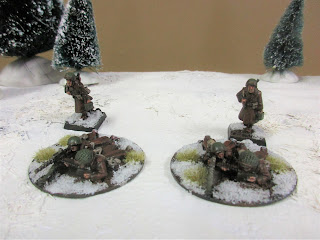 I also got a couple of .30 cal. MMG teams from Artizan. They should come in handy in a game, if these guys ever get to see the tabletop.

Hope you enjoy the post and stay healthy, friends.

Great work on all of these guys Dallas, really well done.
Certainly an odd assortment of dudes that come with that .50 cal team from Warlord?
I do look forward to some Battle of the Bulge gaming...sometime...someday...

Great looking winter force. I like the magnets on the armoured car crew.