Last week I ran a naval war game on Zoom, using Gridded Naval Rules, by Bob Cordery. We re-fought the Battle of Chemulpo Bay, which occurred on 9 February 1904, at the start of the Russo-Japanese War: https://en.wikipedia.org/wiki/Battle_of_Chemulpo_Bay

A Japanese squadron attacked Russian forces trying to break out from a neutral Korean port into the open seas. Frederick and Dallas managed to navigate their Japanese forces remotely, against my doomed Russian force.

All the ships are 1/2400 scale resin models from Panzerschiffe. The beautiful cloth battle mat is from Cigar Box (you can have them add hex grids of various sizes).

Below, the Russian cruiser Variag, accompanied by the old gunboat Korietz. 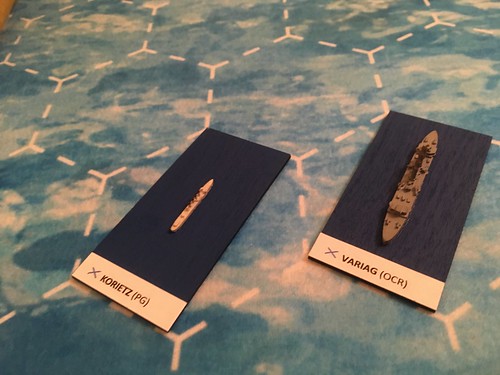 The superior Japanese forces, arrayed into 4 divisions: 3 divisions of two cruisers each, and a torpedo boat division. Frederick ran two cruiser divisions: the lead division with the most modern warship leading, the armoured cruiser Asama; he also ran the Naniwa and the Niitaka. Dallas ran the third cruiser division (the Akashi and the Takachiho) and the torpedo boat division. 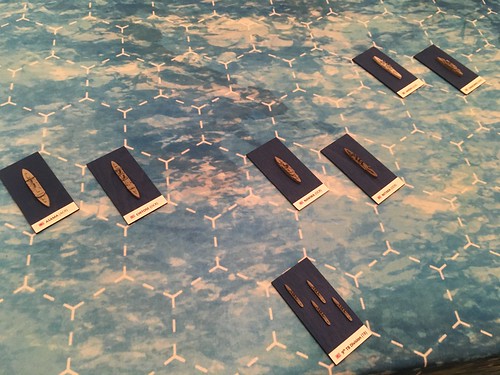 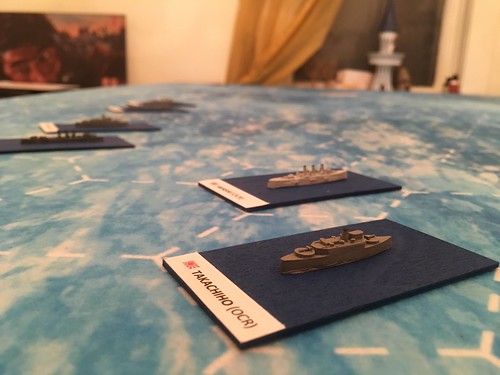 Initial setup of the opposing forces. 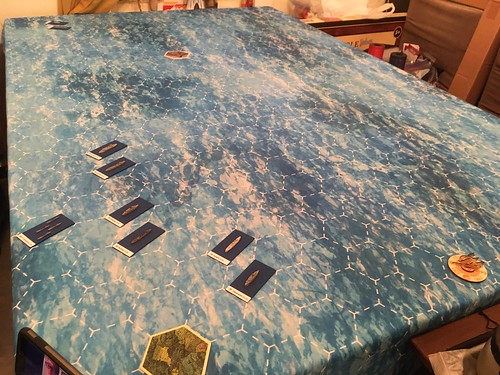 The initial stages of the battle, as the Japanese move to try a squeeze play on the Russians, who in turn used the cover of an island to shield themselves from gun fire as long as possible. 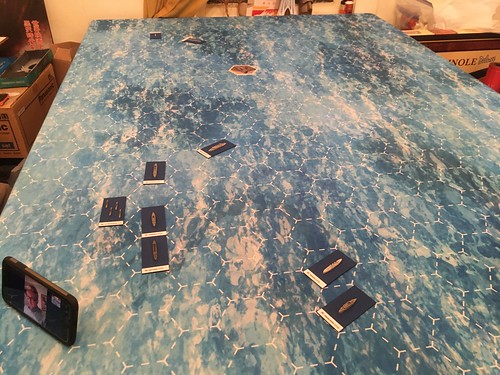 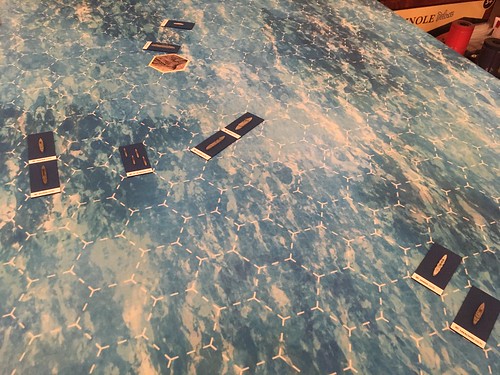 First blood to the Japanese, as the Korietz started taking long range hits from the leading Japanese cruiser, the Asama. 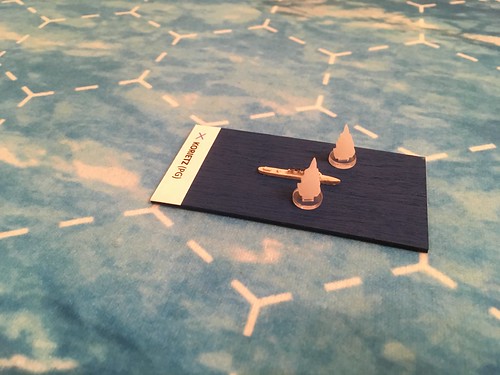 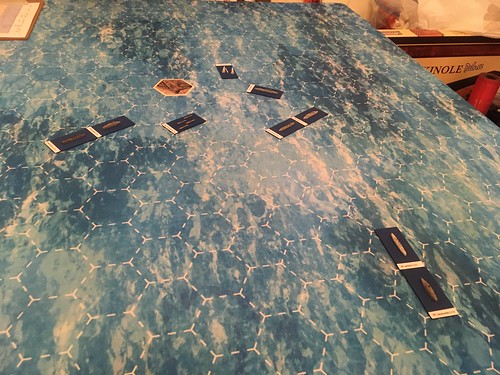 Just before the climax of the game. The Russians tried to cross the Japanese T, but were beat to the punch. Meanwhile, the Japanese torpedo boats had set up a nice deflection shot on the Variag. 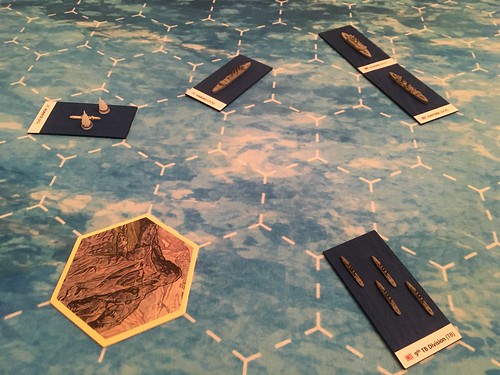 In only ONE turn of furious shooting and torpedo fire, both Russian ships were sunk, all the Japanese torpedo boats were sunk, and the Chitose took serious damage. A decisive Japanese victory! 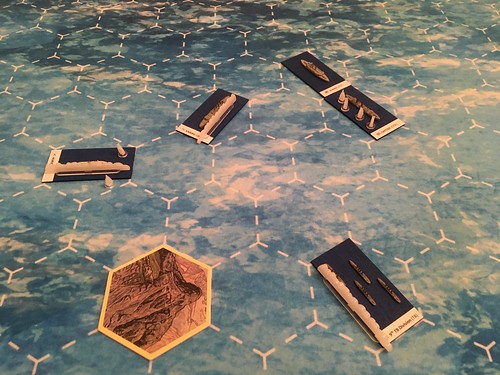 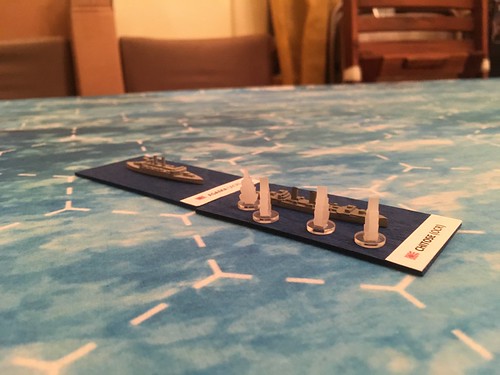 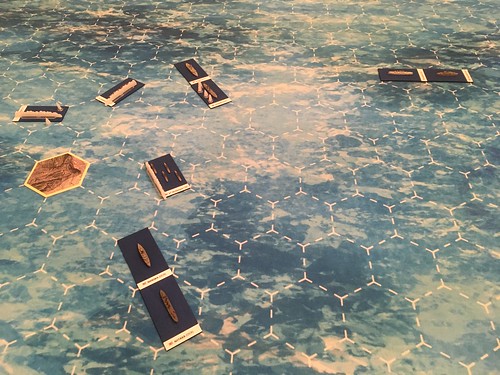 Historically, the Japanese forces turned away from the Russians, to keep them at long range.

However, in the game Frederick and Dallas played the Japanese forces very aggressively, getting into knife fighting range with their 8" and 6" naval guns, and torpedoes. (Click on the maps below to enlarge them.) 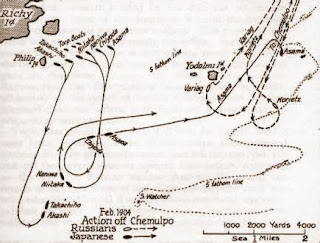 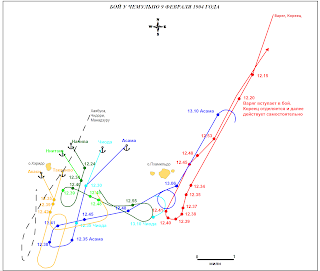 I used multiple cameras, but the hand held iPhone SE did most of the work, zooming in and out upon different parts of the battle area.

The simple rules and hex grid allowed the players to maneuver pretty easily. I look forward to trying out these rules again.

Great looking game, but always going to be one sided. FYI Bob Cordery is an active blogger
http://wargamingmiscellany.blogspot.com/
Since he like to see his rules in action, I’ve forwarded him a link to your AAR. Hope that’s ok. If not have Curt knee cap me...we are regular gaming partners.
Cheers
Peter

I always enjoy reading how people have used my rules, and I’d like to mention your blog post on my blog.

That was a fun game for sure, Dave!

Peter, no problem! I like to interact with rules authors.

Robert, thnaks for dropping by! Please feel free to mention our blog. The Conscripts involved liked the quick play of your rules. I was also intrigued by the landing action illustrated towards the end of your book.

This was an experiment to see if I could successfully run a remote or virtual miniatures game on a platform like Zoom. Since it was well-received, I next plan to re-fight a scenario I ran several years ago with a different set of pre-dreadnought rules, the Battle off Ulsan, another Russo-Japanese War cruiser action:
https://wpggamegeeks.blogspot.com/2012/07/battle-off-ulsan-august-14-1904.html

Under Bob's rules, it seems that it will harder to perform rams (which seem non-historical, despite my predisposition for ramming in any scale or environment), and gun- and torpedo fire will be much quicker to resolve.

I am also contemplating the purchases to re-fight some or all of the Battle of the Yellow Sea. All those battleships...