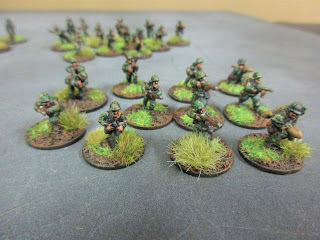 Lots of painting going on lately at Conscript Towers, and one of the things I've been trying to do is get models painted that have ben languishing for some time. My wife gave me these 15mm Peter Pig Waffen-SS troops a few Christmases ago and they'd been sitting in primer for a couple years... but the recent purchase of the excellent "Colours of War" book from Battlefront got the juices flowing again for painting WW2 in 15mm. 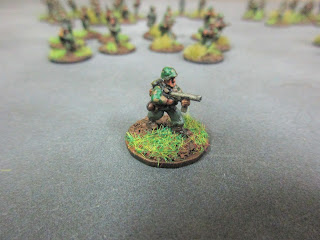 You'll note, of course, that these guys are individually based (i.e. NOT for Flames of War) and this was quite deliberate... Conscript Greg has single-based WW2 forces and I wanted to have some figures for the odd Bolt Action game in 15mm, hence this basing decision. I have some US paratroopers as well and the grand plan is to base them individually as well, allowing some D-Day or Market Garden battles against the Waffen-SS. 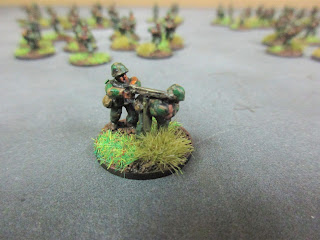 The Piggies are pretty good models, albeit maybe not as chunky as Battlefront's Flames of War range. I followed the Waffen-SS camo guidance in the Colours of War book, using MSP Driftwood Brown as the base, painting random shapes and dots over top with GW Caliban Green, and filling in the shapes with GW Warpstone Glow. Turned out OK after being washed with the ubiquitous Agrax Earthshade. 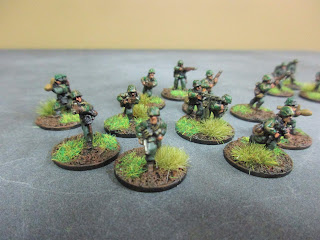 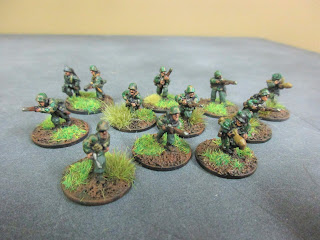 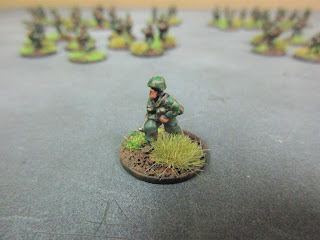 Here's a good look at how the camo came out. I used Vallejo German Uniform for the trousers and random tan yellows for the webbing and breadbags. Rifle furniture and waterbottle covers are Mournfang Brown. 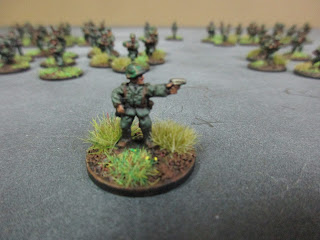 The boss (for now)... some Battlefront miniatures are on the way to supplement these guys. A couple of MG42 medium machineguns will add some supporting firepower as well.

Here's the group - should be enough for a reasonable game of Bolt Action I reckon. Next I'll get at the Paratroopers from the Open Fire! Flames of War box - this also contained German infantry, a couple of StuG IIIs, and a bunch of Sherman tanks that I'll paint as British.
Well that's it for these guys, hope everyone is staying healthy and sane :-)
Posted by Dallas at 11:39 AM

Great work on these guys Dallas!