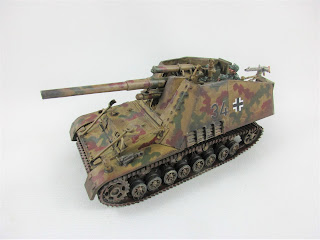 The Hummel is the first of the modern range of Bolt Action vehicles that I've built and painted, probably because the majority of my WW2 vehicle collection is 1/48 scale, and the Bolt Action stuff is 1/56. I've always wanted to build and paint a Hummel for my Germans though, and the fact is that there aren't any readily available Hummel models in 1/48. 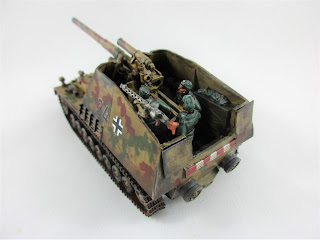 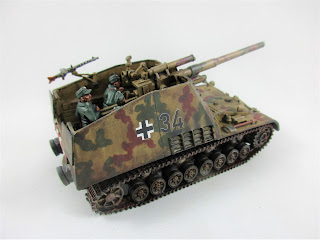 The Bolt Action kit in 1/56 scale is pretty simple to put together. The hull (including interior storage) is one big piece of resin, requiring little cleanup. The rear doors are cast in metal, as are the sFH 18 L/30 15cm howitzer (with separate metal sights), the crankwheel for the gun mount, the left and right barrel supports, the headlight, and the MG34 and its pintle mount. The left and right track and suspension assemblies are separately cast in Bolt Action resin. Unfortunately there were no assembly instructions included, and the pictures on the website didn't disclose where one of the metal parts fit - not a big deal though, it was obviously just a minor interior part. Other than this, the kit wasn't hard to assemble but one of the resin hull sides was a little warped. It straightened out fine with some hot/cold water immersion though. 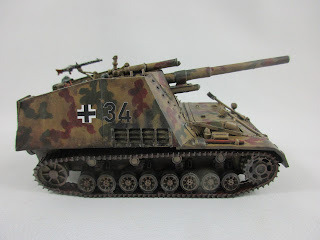 No decals are included, unfortunately, but I found some in my decal folder. 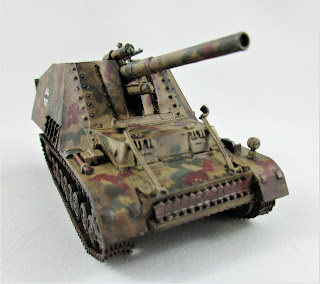 The vehicle was basecoated Zandri Dust, and camouflaged with Doombull Brown and Catachan Green. I then washed it in Agrax Earthshade, followed up with decal application and sponge chipping, as well as applying some mud and dirt around the lower parts. 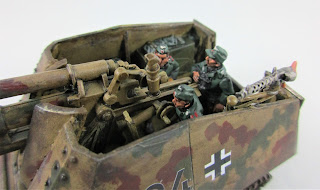 The kit also comes with three crew, cast in metal with separate heads. You get three heads wearing M-38 schiffchen (sidecaps) and one in an M-43 einheitsfeldmuetze (soft cap). This really sold me on the Bolt Action Hummel as I'm a sucker for open-topped vehicle models that come with crew. 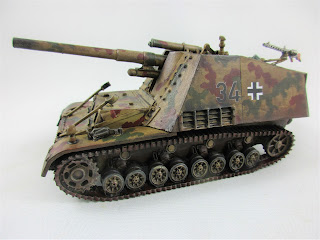 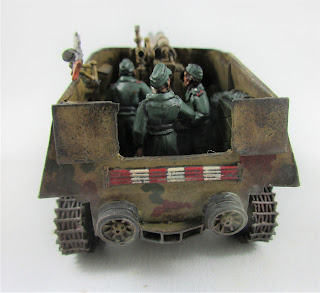 I modeled the rear doors open, since the metal doors didn't fit the opening well in the closed position. I love that the ranging rods are cast onto the hull, a great detail. 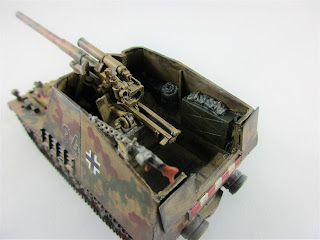 Interior detail on the kit is super and is all cast-in. 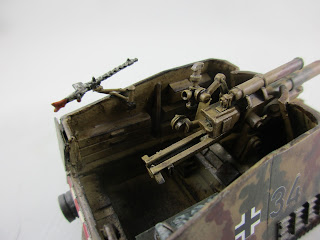 Pintle MG34 is slightly fiddly but is a nice touch as well. 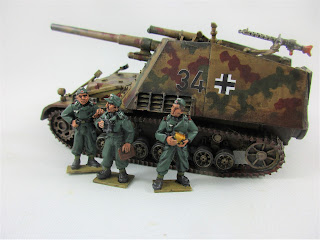 Here's the crew pictured outside their vehicle.
I should also add that I tried out a couple of different matt varnishes on this kit. My usual go-to is Testor's Dullcote, but the can I've been using has gone satin-y... not good. I picked up a can of Winsor & Newton General Purpose Matt Varnish spray, but it took ages to dry, smelled pretty bad, and didn't flatten the finish much at all. Next I tried Tamiya XF-86 Flat Clear acrylic, brushed on neat from the bottle. It worked much better at flattening the finish. Not as good as Dullcote at its best, but better than the can I've got now.

Anyway, I hope you enjoy the post, and stay healthy!

Very nice! I gave up on testors years ago. I found that every can was satin.

Fantastic work Dallas. I am pretty wary of Warlord's resin/metal mixes, but you certainly made this one look fantastic! Great job.