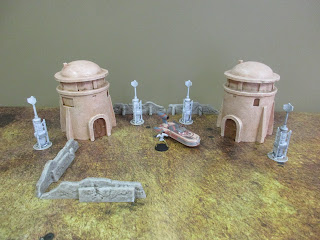 A bit of a hodge podge update for today with some newly-acquired terrain for our Star Wars gaming. 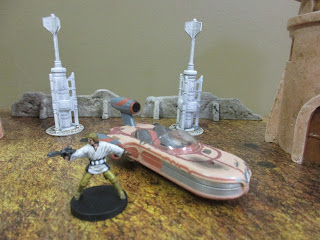 First off there's an Action Fleet landspeeder. Available cheaply on eBay, this is a great little model, well-detailed and nicely weathered right out of the box. It's a great piece to give some lived-in flavour to any Star Wars Tatooine-themed table. In fact I'd get another to repaint in a different colourway. The Luke Skywalker figure is from the Wizards of the Coast "Star Wars Miniature Battles" range, from which most of my collection is drawn. The models are prepainted to varying degrees of quality... in fact when I got this one out for the photoshoot I was disappointed by how bad it looked, so I decided to repaint it quickly... a half-hour's work and he's looking much more presentable. 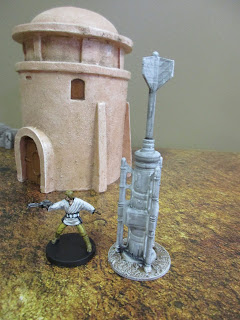 Next up is a moisture vaporator from a set of terrain produced by ebay seller endertoys under their "Galactic Legion" brand. They're 3D prints which do show some layer lines, but nothing too obtrusive... and the price is certainly right. For $15USD you get four vaporators, four wall pieces, and four communications consoles, with free shipping in the USA. Definitely worth a punt at the price. 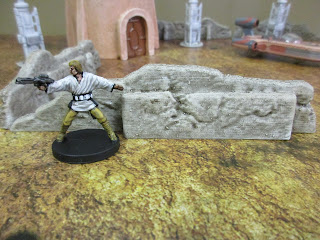 Here's one of the endertoys wall pieces. You get four - two of each design. They scale well to 28mm models. The 3D prints come unpainted. 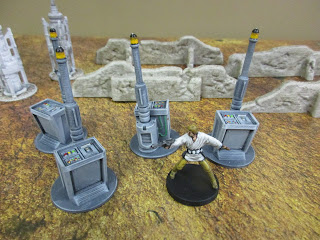 The consoles aren't super-Tatooiney but I'm informed by Conscript Dave V. that they serve a particular role in Star Wars Legion, so fans of that game will be pleased to see them in the set. 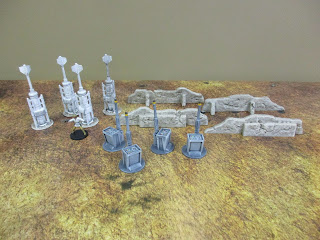 Here's the complete endertoys set all painted up. As I say, pretty good for $15 shipped. 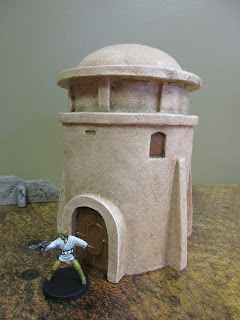 Here's a Desert Tower model from Urbanmatz out of the Czech Republic. It's a solid resin piece and comes prepainted. I can't say enough about these buildings, they look just super and will really spiff up any Tatooine table. You get two in the set for less than 25 euros ex-VAT. 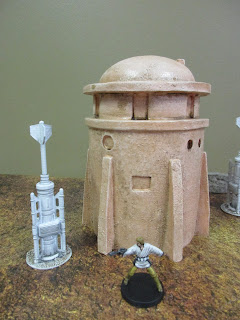 Again, I have to thank Conscript Dave V. for the referral to Urbanmatz. They have a good selection of SF and fantasy terrain including pieces themed for medieval, Gothic, industrial, and desert tables. All pre-painted and really good stuff. As you might surmise from the name of the firm, they also sell terrain mats - I picked up one of those as well that I couldn't resist.

The only drawback with ordering from the company is the shipping cost... they use FedEx for overseas shipping and it costs a packet! It doesn't seem to get any cheaper with quantity either, hovering around 40-45% of the cost of goods. At least the order came quickly - ordered on Tuesday and I think it arrived on Friday.

That's it for today - I hope we can get these pieces out on a tabletop soon. Until then, stay healthy everybody!

That's some great stuff Dallas, looks excellent.
Pre-painted terrain. Now THAT is my kind of terrain!

That's a great selection and I really like that Urbanmatz stuff, off to have a look now.

Great objectives and terrain for any Star Wars or other sci-fi game with a desert bent.

The Urbanmatz desert buildings are so nice. I got the "half" set. I am thinking about getting some more!