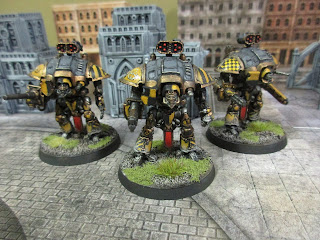 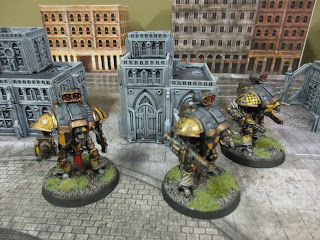 The difference with these models is that I've used the extra parts sprue available from Games Workshop to build these Knights with Thunderstrike Gauntlets, roclet pods, and meltaguns - not to mention some new head sculpts. 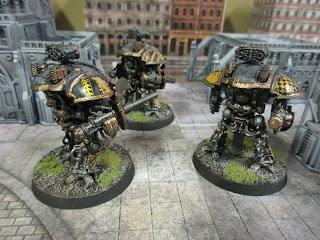 I've painted these Knights similarly to the previous three - Leadbelcher, Hashut Copper this time for the bronze, and XV-88 and Averland Sunset. The grey bits are Mechanicus Standard Grey. The whole lot bar the yellow bits were washed with Nuln Oil, with the MSG re-highlighted after the wash. The yellow was done with Agrax Earthshade. 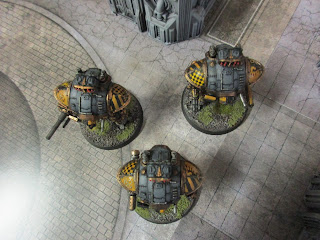 The decal sheets for AT18 are absolutely superb; I've been using the House Caesarean decals on the Legio Krytos sheet, there's a great variety on there. The one disappointment is the Caesarean decal I used on the engine with the Thermal Cannon (at bottom in the pic above) - it's a lot less opaque than it appears. Oh well. 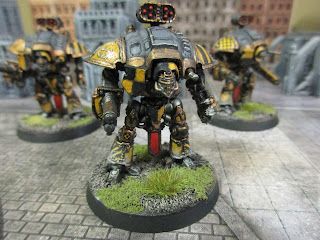 Here's another pic of that model. Note the head with crown - I've painted this engine as the leader of the banner. 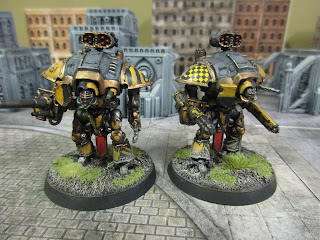 Here's the other two newly painted engines. I prevaricated for awhile over how to paint the rocket pods but ended up just doing them in MSG with copper and Leadbelcher trim, with rockets picked out in Mephiston Red and Evil Sunz Scarlet. There are six rocket pods in the upgrade pack and I've only used half of them here. 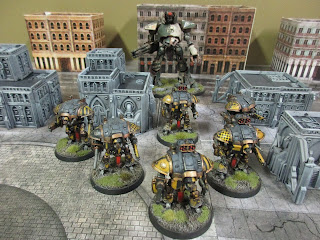 Here's all six of my Knights with a Legio Krytos Reaver in the background. It's good to have these Knights done for now, although I've run out of Dullcote so I'll have to pick up some more (somehow!) and spray these before getting 'em on the table.

Painting the rocket pods for these guys got me motivated to paint the full-size version for my 40K Knight so stay tuned for that soon. Stay safe everybody!
Posted by Dallas at 6:22 PM

These are impressive! I hadn't appreciated how much the Pods & fists enhance the models.
Are the heads from the same GW sprue as well?
Nice buildings too, are the rearmost ones card models from Dropzone?
Best wishes,
Jeremy

Thanks guys! Jeremy - yes, the new heads came on the GW sprue. And good eye - the card buildings are indeed from the Dropzone Commander "Ruinscape" set.