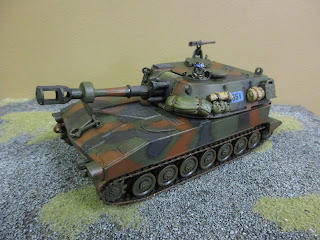 One of the historical periods I really love to game is the '80s - much as it pains me to consider that a decade in which I was a teenager is now "historical" :-)

In 15mm scale we game the period mainly using Battlefront's excellent "Team Yankee" rules, while in 28mm we've used several sets as bases for our gaming, including but not limited to "Bolt Action", our own set ("Red Storm!"), and even a variation the venerable "Lord of the Rings" skirmish set... 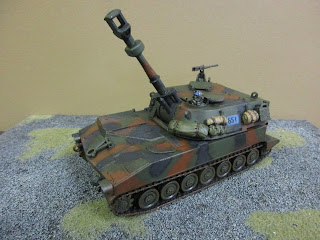 Large-scale gaming is also fun because of the painting involved, and for modern periods like the 1980s, part of the fun is the challenge of sourcing the models. While there are a small number of companies making vehicles for the period, lots of these are skewed towards more modern stuff from the '90s and forward. Finding '80s stuff can be tough. 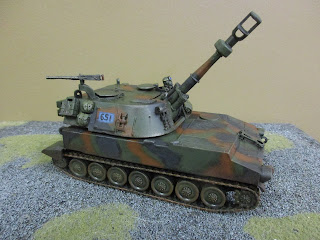 It was on one of these searches that I discovered the Aurora 1/48 model kit of the M109 SP Howitzer. The basic kit actually dates back to 1965 (!) but the copyright date on my instructions is 1977. I think this date tracks to an updated kit that also included the long-barrel 155mm gun update from the M109A1 variant. These kits do appear on eBay from time to time but oftentimes sellers ask the Earth for them - like $60+! I refused to pay this and bided my time... eventually I found one on sprues, sealed in factory plastic, with instructions and a boxtop-style insert. I think I won it for $10 plus shipping, which certainly suited me :-) 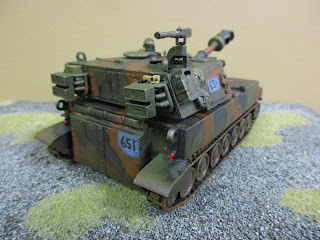 The kit was apparently a "Young Model Builders Club Selection" and it shows a bit... the rear of the vehicle shows little detail - even the rear spades were left off altogether! Unfortunately, unlike some, I wasn't so fussed with this and I didn't bother with any scratchbuilding to address it. 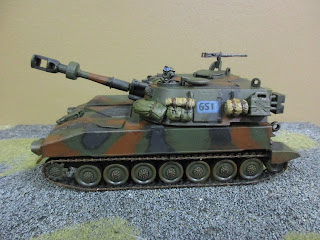 I did add a bit of stowage to the vehicle just to give it a bit of a lived-in look. I left the front hatch unsecured so it can be opened up - one of the converted crew from my M113s fits nicely there just to give some MOPP-suit flavour. 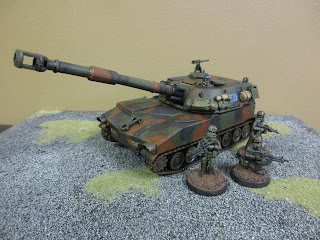 I rigged up some magnets on the barrels and gun mount to allow the short 155mm to be swapped for its longer-barreled successor. Scale is demonstrated by some Eureka US Army soldiers in MOPP suits. 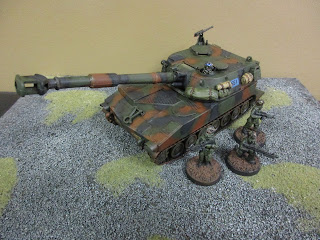 The newer M185/39 gun is really unfeasibly large. It looks like something out of 40K doesn't it! 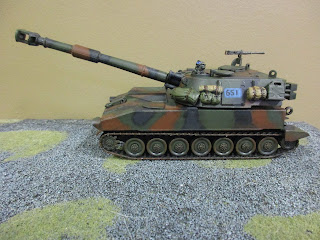 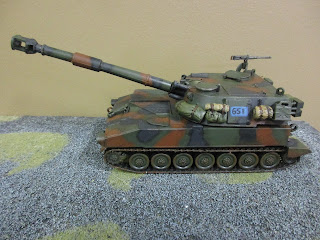 Here's a pic with the hatch buttoned down. 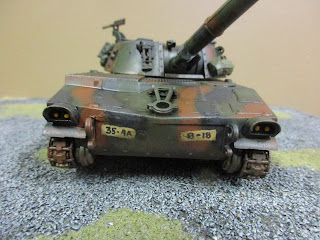 Front view of the vehicle. I did lightly weather it with paint and some light earth powder, but I think the powder may have been diluted somewhat by the subsequent Dullcote. Another word of warning: I primed the vehicle with the tracks attached - I should have known better. Never spray prime vinyl tracks!!! The primer reacted with the vinyl to turn the tracks sticky, and although subsequent brush painting improved things it didn't eliminate the stickiness altogether. Can't believe I did that. 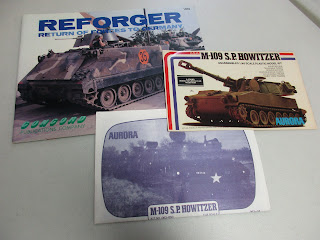 Some reference material... there are a couple pics of M109s in the Reforger book as well as some detail of the other markings. Similar to the M1 Abrams and M113s I've painted, I didn't put national insignia on the M109, but instead limited markings to an "exercise" marking as used in the Reforger exercises.

I'm pretty happy with how the build turned out and I think it'll be fun to have on the table in a game. Of course the 155mm main gun is not really suitable for tabletop action in 28mm but we'll figure something out!

Fantastic work Dallas - what a cool find, and it looks great. I'm sure the "chemical commies" will think twice as they advance on the game board!

There's scenarios you could try that involve the gun (battery?) firing at an off-table target, or a table involved in a subsequent game. A commando team cold be trying to stop it, or take it over...