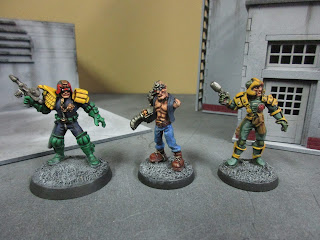 Further to the recent Dredd-mania afflicting the residents of Conscript Towers, I've just finished three models from the late, lamented Foundry 2000AD range. These three - Judge Dredd, Mean Machine Angel, and Johnny Alpha (the Strontium Dog) - (as well as Slaine) were packaged in a "2000AD Preview Pack" that I was fortunate to pick up on an eBay forum. I'm not a big fan of Slaine (or more accurately, I can't think of a game to use him in) so I've left him unpainted for now. 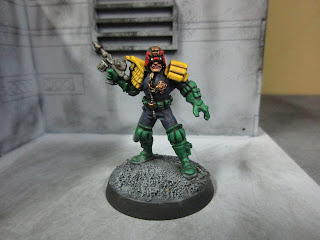 First up, Judge Dredd. By Grud, this is a nice model! Chunky but finely detailed, it's a perfect Dredd I reckon. As nice as the new Warlord sculpts can be, this one just blows them away. Metal > resin/plastic, plus the detail and heft are just awesome. 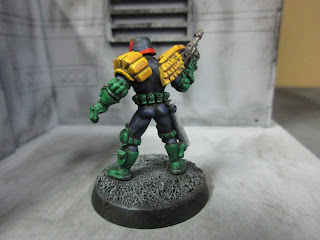 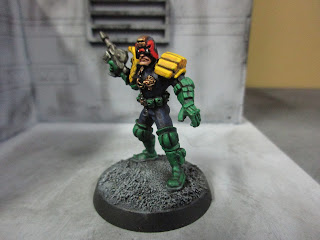 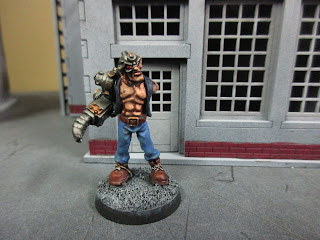 One of the main reasons I wanted to pick up the Foundry pack was to get a Mean Machine model. Yes, Warlord makes him too, but you have to buy a box of half-dozen characters to get him, and Mean was really the only one I wanted from that box. 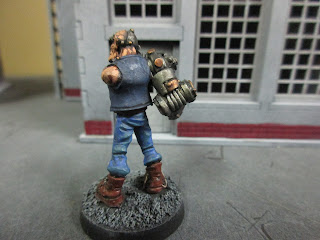 An excellent sculpt here as well, down to the detailed "dial" on his forehead. He really just seems like the kind of dude that would pair a denim vest with jeans, doesn't he? 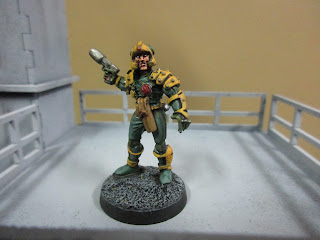 Here's weird-eyes Johnny Alpha himself. I've always been more of a Dredd fan than Strontium Dog, but I thought it'd be good to have a model of Johnny handy nevertheless as the two did meet once or twice in time-travelling crossovers. 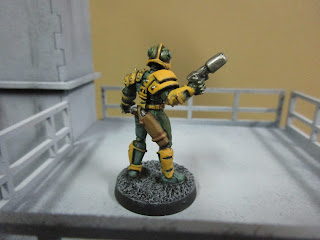 Johnny, of course, is a mutant Search/Destroy agent ("Strontium Dog") - basically a bounty hunter who tracks down criminals for pay. Johnny's weird eyes are the source of his mutant ability to see through walls and read and influence the minds of others. It's not all X-Men in the S/D world though - most mutants aren't super-powered, just weird looking! Strontium Dogs are pretty much all mutants too, as the S/D lifestyle is too dangerous for normal humans. There are exceptions though, such as Wulf Sternhammer (Johnny's sidekick and apparently a Viking transported forward in time)... 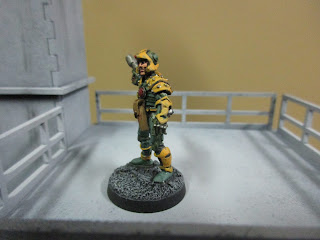 Time travel is kind of a thing with the Strontium Dogs, as Johnny wields a multiplicity of time-based gadgets, and has even travelled back in time to apprehend a criminal from Mega-City One and (of course) to capture and bring Hitler to trial in the future.

I have to say that it was super-fun to paint these three. Nothing beats Foundry models when they were on their game and as noted metal always ALWAYS > resin. Looking forward to getting these guys out in a Judge Dredd game for sure.  BOK!!!
Posted by Dallas at 6:59 PM

Great work on these guys Dallas. Also, you are absolutely correct: metal ALWAYS > resin or plastic.

I feel that with metal figures, the dice results aren’t as likely to hurt them! Dredd also looks like he includes the glutes in his workout rotation!