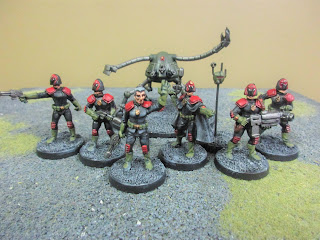 Before current license-holders Warlord Games started to tear up the Judge Dredd gaming world, Mongoose Miniatures had the license and raised a little Hell of their own. One thing they did was a massive Kickstarter campaign back in 2012... the last of which was still being delivered in 2018! 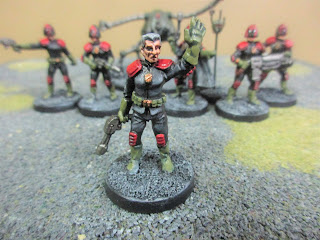 Anyway, back at that time Conscript Perry was a backer of the Kickstarter and asked me if I wanted to share in his support. Did I! I ended up getting a bunch of stuff from the campaign, including these Sov/East-Meg "Apocalypse War" Judges that just hit the painting table. Above is Judge Officer Gagarin. 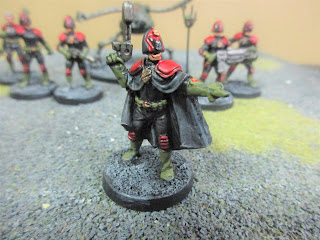 Here's Senior Judge Drago. Some notes on painting: pads and helmet trim are Mephiston Red washed with Red Ink, with Nuln Oil applied around the edges. Black bodysuits were highlighted a dark grey. Gloves, boots and ammo pouches are Catachan Green highlighted with Camo Green. Speaking of the ammo pouches... I know that in the comics, you sometimes see these coloured red, but I thought they looked better in green matching the gloves and boots. So there. 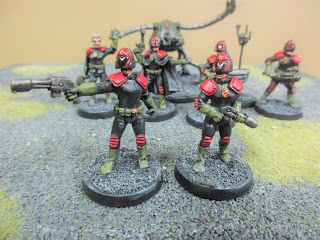 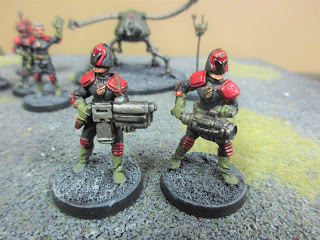 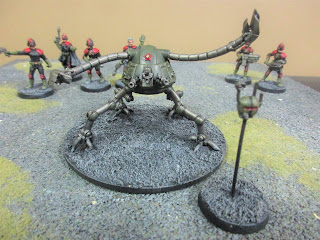 The Karpov MF7 Sentenoid in its full glory... this is a pretty cool model. 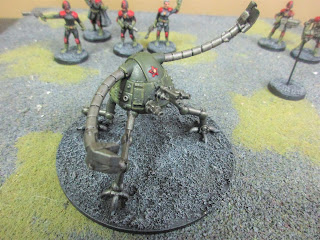 The Satellat... a sentient helper-robot-drone that assisted Orlok in introducing the Block-Mania virus into Mega-City One's water supply, prior to the Apocalypse War. TMI??? 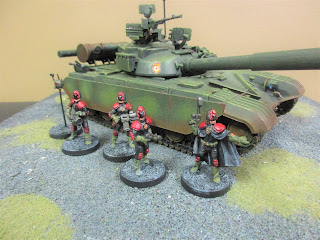 Lastly, here's some of the group posing alongside a Rad-Sweeper, the main Sov armoured vehicle used in the Apocalypse War. Readers will note that the Rad-Sweeper is represented by the T-640 tank I built, converted and painted for my FuturKom force, years ago... funny how these things can cross over! Any chance these Judges will perform better when I take up the specialist dice?

They look great Dallas. And it's always great to see the T-640!

These look ace love the tank!

What a wonderful take on the classic Judge Dredd judges, marvelous choice of colours. Really love the Sentenoid, it got such a nice Soviet look to it, could be perfect for Konflikt 47'.