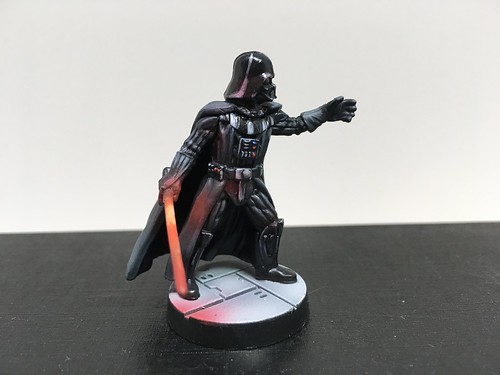 I am a big Star Wars fan. Star Wars (the 1977 film) changed my life, inculcating a lifelong love of science fiction and fantasy. However, it took me almost two years to pull the trigger on FFG's miniature war game, Star Wars: Legion, after its release in 2018.

The rules are elegant. Combat, at its heart, is an opposed dice roll, whose outcome results in both casualties and morale effects, including suppression and panic. The various effects and stratagems really have a Star Wars feel to them.

The figures are well sculpted. But. They are also 40mm tall. Darth Vader is even taller. Which means all the Star Wars figures I have collected for the past almost 30 years are not compatible with the new figures; the old figs are too small. This also means that my pre-existing building terrain is too small.

A certain critical mass was achieved during the Game-itoba convention last fall. As I ran What a Tanker! several times, on the next table over the Winnipeg Wookies game club ran Star Wars: Legion, which I watched when I could throughout the day. At weekend's end, I contacted Brian at Amuse 'N Games and went all-in, purchasing a starter set and several trooper and vehicle expansion boxes. I also went all-in on the terrain, obtaining all the Galactic Warzones terrain (including some dupes) from GF9, and have ordered some really neat stuff on Etsy that I am saving as a bit of a surprise.

My intent is to provide both sides' forces in a series of linked games for my fellow Conscripts. To that end, I have collected a selection of both Imperial and Rebel units for everyone to game with. Approaching 70 figures and vehicles, this was waaaay too much for me to tackle by myself. So, I enlisted the aid of fellow modelers Steve Brown and Cody Bernard. I commissioned Steve to paint the bulk of the Imperial forces, and Cody the Rebels. (That left for me to paint some of the heroes of the Galactic Civil War: Jedi Luke Skywalker, his sister Princess Leia, Han, Chewie, Artoo, Threepio, Boba Fett, General Veers, Mandalorian Sabine Wren, and Bossk.)

This post shows the main components of Steve's Imperial commission, which was completed last week.

At the top of the page is Darth Vader. The pose is suitable menacing, showing Vader Force-choking some hapless victim. Steve rendered both the varying textures of Vader's uniform, and the glow of his red lightsaber, very well.

Below, two squads of the ubiquitous Imperial Stormtroopers, with some optional heavy weapons. I  really like how Steve rendered their armour. There's no white involved, just varying shades of darker and lighter grey! The groundwork and dusty boots fit the desert planet theme I have in mind. 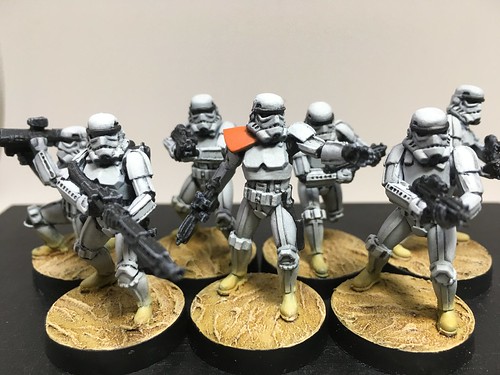 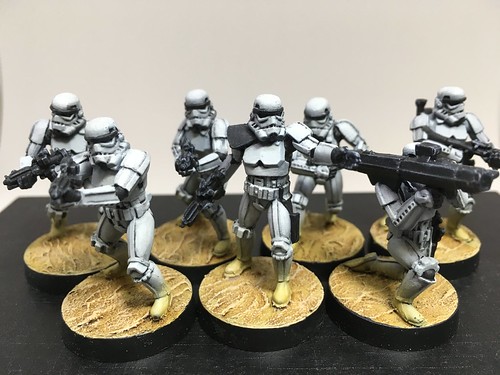 Below is an Imperial Officer, a communications tech, and a couple of droids. The Officer provides a much cheaper (points-wise) commander option than Vader, and the others provide different kinds of tactical support in-game. 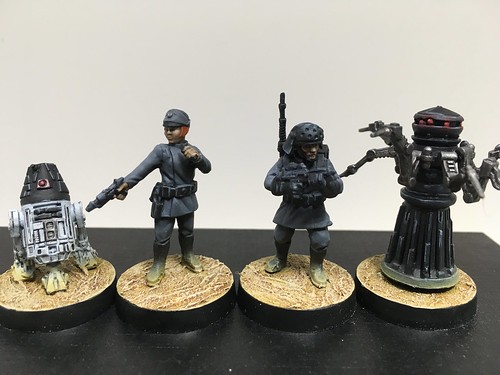 Below, a unit of Scout Troopers riding speeder bikes. They will allow for fast, deep striking attacks. The bikes are suitably lean and mean looking. The pose of the one firing a Parthian Shot is neat. 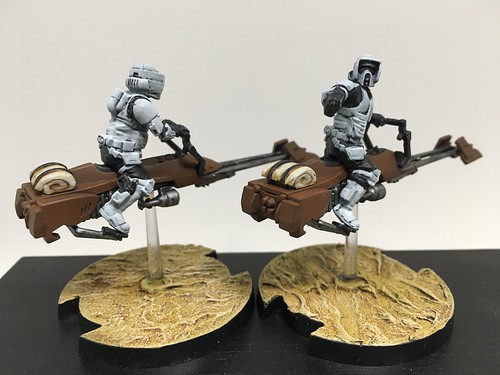 Another unit of Scouts on speeder bikes. 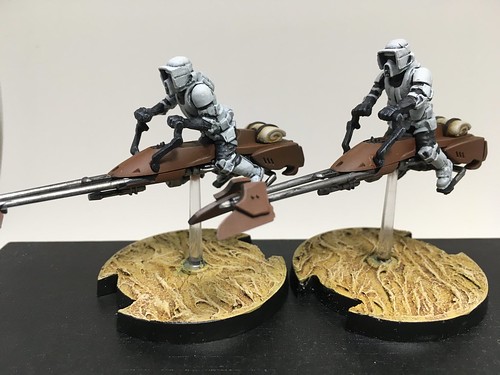 Below is the heavy metal of my Imperial forces. An Imperial All Terrain Scout Transport (AT-ST) walker, armed to the teeth. The weathering effects are well rendered. 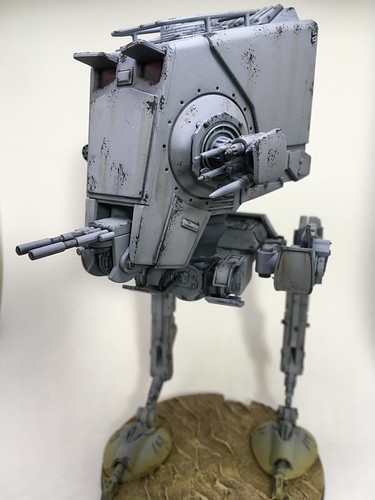 The model is huge. Recall, the officer figure is about 40mm tall. 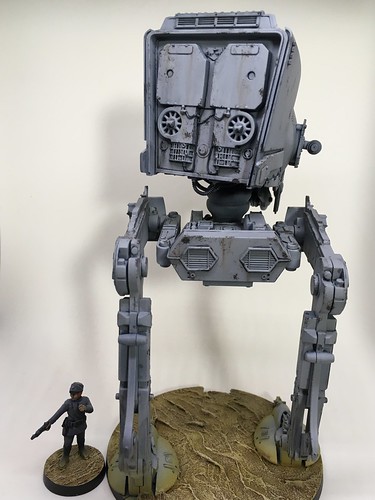 With these models I am ready to run the Imperial side of the first three games in a Star Wars campaign setting. Steve has more Stormtroopers on the go for me; another full squad, and some different heavy weapon and support troops.

I was so excited to receive these models. They evoke fond memories of movies past, and they will allow us to fight some key moments in an alternate history of "A long time ago in a galaxy far, far away..."

Wonderful! It took me a while to get going with this as well, but like you the fondness for the past did for my resolve in the end. I ended up basing mine on flat bases, not sure why, probably at a sub-conscious level I found them too tall!

Sure looks great - Steve is a tremendously talented painter!

These are superb, well painted!