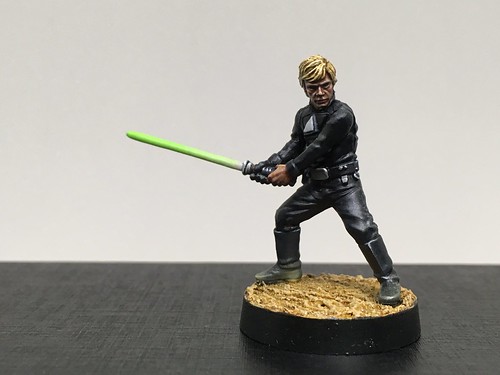 "I am a Jedi like my father before me."


As I indicated in my earlier Star Wars: Legion post, my own contribution to the project are the various heroes on both sides of the galactic conflict. With the commander version of Darth Vader already completed by Steve, and with The Empire Strikes Back version of Luke in Cody's capable hands, I turned my attention to Return of the Jedi and two of the main protagonists: separated-at-birth twin siblings Leia Organa, Princess of Alderaan, and Luke Skywalker, Jedi Knight.

The model for Leia was released by Fantasy Flight Games back in May of 2018. It's a decent casting, in a soft plastic, that captures the general features of Carrie Fisher. In the game, Leia is an excellent commander, able to direct troops to take cover, rally off their suppression and panic, get soldiers moving, and give accurate supporting fire with her favoured sporting blaster (in the movies, I do not recall her ever missing a shot).

In contrast, the "Operative Luke Skywalker" model just came out a couple of weeks ago. The sculptors have really stepped up their game; it's a very nice likeness of Mark Hamill. In Legion, Luke is no longer a leader of troops, but rather a lone wolf. His powers and abilities are off the hook, able to leap over obstacles, bend others to his will, deflect blaster bolts, and slice up tanks with his lightsaber. The soft plastic is also better formulated; I was able to take a finer grit sanding stick and sand off the mould lines on his saber, which you cannot do with the earlier version in the started box.

After priming with Chaos Black, I started off with many very thin layers for zenithal highlights on Leia. Only 7 drops of colour (6 drops Vallejo White and one drop Golden Sepia airbrush paints) in the small metal cup in the airbrush, 6 drops of thinner, and the rest water. This was airbrushed downwards at a 45-degree angle all around the model. Then, switching the pigment portion of the mix to 6 drops of only Vallejo white, I airbrushed downwards at about a 60 degree angle from above and in front of the head of the model, giving a spotlight effect on the front of the figure.

Emo!Luke is wearing various tones of black. I masked off the rest of his body with a plastic bag with a hole cut in it and taped to the painting handle, and sprayed zenithal highlights on his head. I then masked everything but the saber blade and sprayed that with an even coat of GW Wraithbone, a yellowish off-white colour, which I thought would be a good base for the green glowing effect I was going to add later. I then hand painted Vallejo Black Grey on Luke's boots; this is Vallejo's default army boot colour. 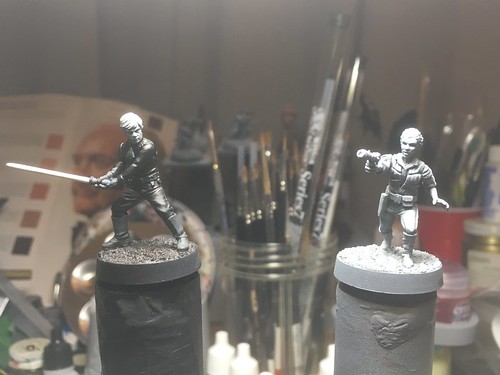 Leia and Luke have different complexions. Luke grew up on a desert planet with twin suns, and Leia was raised in the halls of nobility on Alderaan and the corridors of the Senate on Coruscant. I under-painted their faces in Vallejo acrylics with this in mind.

For Leia, I worked from dark to light using Black Red, Beige Red, and Light Flesh, working the contours of her face like makeup. I used the shadow tone to completely cover the black paint under her arms and chin; I did not want too harsh of a contrast. In similar fashion, I painted Luke's face and left hand using Burnt Cadmium Red, Brown Sand, and highlighted with Basic Flesh Tone. Leia's lips got some Flat Red, and Luke's lower lip was sketched in Violet Red. Note that I did not paint in eyeballs. For both figures, the eyes are sculpted as slits, with well-defined upper and lower eyelids. The eyeballs themselves are not rendered. I decided to concentrate on the features around the eyes. Especially for Luke, this would give a steely expression. 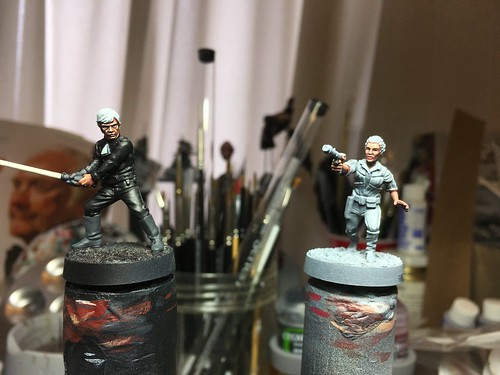 Next up was the oil painting of the skin tones. I laid out several colours on my palette, as seen below. Note the number of flesh, brown, red, and neutral tones, all useful for the figures' skin. As in the past, I used very small amounts of pigment. I focused on highlighting things like the shape of Leia's skull around the edges of her forehead, refining the shapes and details around the eyes and middle face of both figures, adding ruddiness to both their cheeks, shaping their jawlines (I used the neutral tones mixed with flesh, to give shape without making it a true highlight), picking out the knuckles and refining the general shapes of the hands and arms, and blending the transitions between all these various tones. Leia's lips had a couple of catch-points of  Titanium White, and Luke's lips highlighted with a pinker version of his flesh tone. 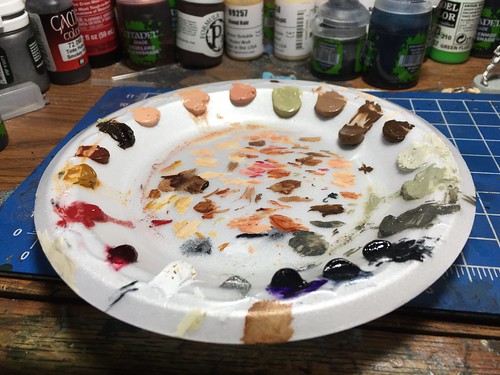 Leia was finished fairly straightforwardly with glazes of GW acrylic shades, using some oils to lighten up the shirt and lighten the top edge of the stripe on her pants. Looking at various photo references of Carrie Fisher on-set, I intentionally lowered the brightness values of Leia's shirt, vest, and pants, as compared to the movie versions. This was to focus the viewer's eyes more on her skin tones. Her hair was glazed with various browns, more to emphasize the overall shape of her hairdo, rather than to pick out details of the individual braids.

Luke had an added complexity. I find black is a difficult colour to work with. You don't shade black, you can only highlight it. But you cannot add so much highlight that the article of clothing reads as "gray" instead of "black". I used neutral gray oil tones to bring out some of the folds and upper edges of Luke's uniform, belt, right glove, and boots, feathering them into the black. Some lighter gray and white highlights picked out reflections on the metal of the equipment belt, the handle of the lightsaber, and the shinier leather boots. The inside lining of his shirt was painted with GW Ulthuan Gray, and edged in Titanium White oil.

I painted Luke's hair with Reaper's Blond Shadow, Blond Hair, and Blond Highlight acrylics, with the light source again above and to the front of the figure; some GW Seraphim Sepia glaze pulled the hair colours together. I masked Luke with another baggie and lightly airbrushed his lightsaber "blade" with Golden's Fluorescent Green, working up the blade from the tip, lightening near the hilt, giving the effect of a hotspot of the plasma blade at the hilt.

Following Steve's formula for the sand on the bases, I started with some fine grit acrylic medium, sculpted some small sand "waves", painted the groundwork with Vallejo Desert Yellow, shaded with GW Seraphim Sepia, and highlighted with Vallejo Iraqi Sand. Again using the airbrush, I slightly dusted the figures' boots with Desert Yellow. I edged the bases with Vallejo Black. 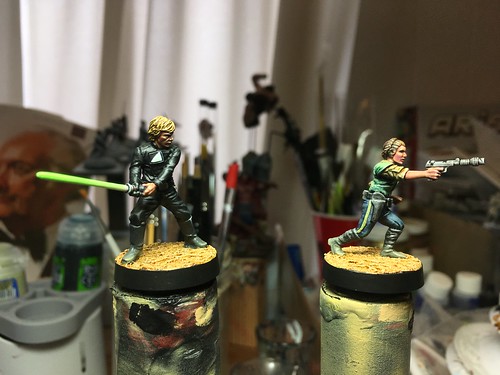 A thin coat of Tamiya TS-79 Semi-Gloss spray, and the figures were done! 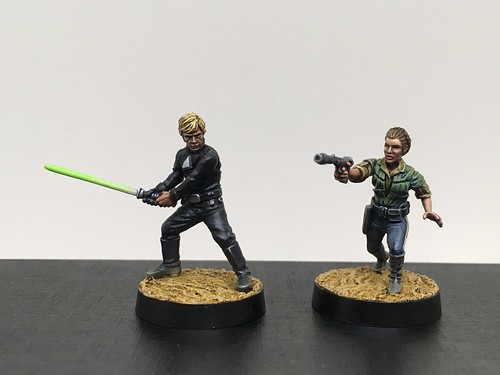 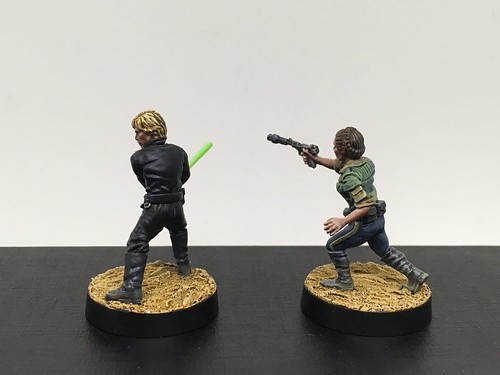 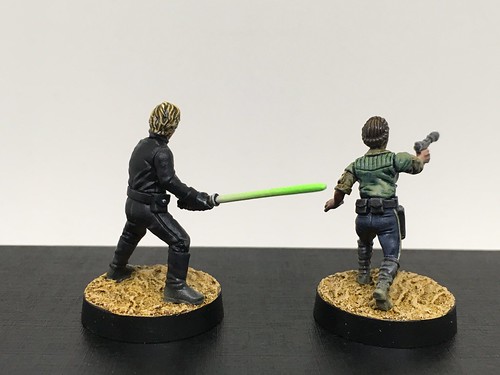 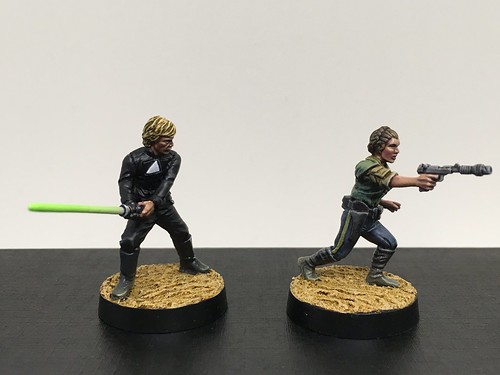 I think the figures turned out pretty well. They are instantly recognizable as the characters from the film. As an added bonus, they will provide very powerful support and strike capability for the Rebel forces.