Regular visitors to this space will have noticed reference to "Challenge Island", a feature of the 10th edition of Curt's Analogue Hobbies Painting Challenge.  One can "travel" on the island following a particular path, making the themed submissions in turn, or one can take a short cut to any particular spot on Lady Sarah's Balloon.  The fee for the journey is simple - you need to paint a female figure. And you get bonus points if you show that you are enjoying some bubbly drinks as part of the painting. For more info and background on the Island and Sarah's Balloon, see info here.

I needed to make some more progress on my Challenge Island journey, but the options for my next stop were not great - either "Rousell's Sandhill" or "Douglas' Shallows".  Neither theme location worked for me or my figure collection. So, I summoned the Balloon of Lady Sarah.  As a figure, I submitted Mme. Clergue - budding commander of a Franc-Tireur formation for my Franco-Prussian War project. These are 28mm figures from the Wargames Foundry 28mm FPW collection.

The Franco-Prussian war went very badly, very quickly for the Imperial Government of Napoleon III.  Moltke and the gang had them in the bag at Sedan, and surely assumed some smooth negotiating and tough concessions would make for a lovely fall.  But that was not to be...the French Republic rose from the ashes of Napoleon III's abdication.  It had almost no army to speak of, but the French spirit was not to be easily quenched, and the Republican forces fought on.

The Prussians found themselves needing to occupy and secure considerable chunks of French territory as they pursued a siege of Paris and fought to crush the Republican French armies.  This task was made harder by the Franc-Tireurs, guerilla fighters who harassed Prussian troops along their lines of supply and joined in at the margins in some of the engagements in the later phases of the war. Foreshadowing the time of the Maquis, the Franc-Tireurs battled to make sure the Prussians paid as high a price as possible, and made the final defeat of France in 1871 a lot tougher.

As is so often the case in these situations, many a Franc-Tireur met a grim and summary fate, either in action, or caught in security sweeps. The reprisals visited on these resistance fighters were at times expanded to local communities by weary, angry and scared occupying troops. 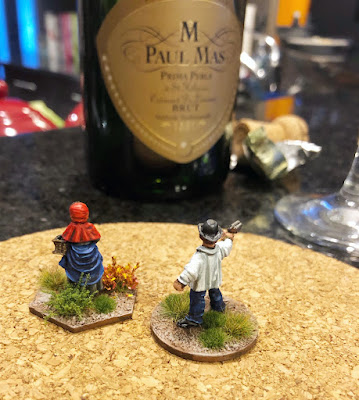 My Franco-Prussian War collection is, for now, very focused on the initial "Imperial Phase" of the war, but for skirmishing purposes I want to get from Franc-Tireurs organized.  Many of these bands were led by men, but the women of France played a critical role in these efforts too, and I wanted my band to be led by one.  Thus we have Mme Clergue...she is on a hex-shaped base used in our skirmish games to denote senior officers. Standing with an innocent basket (loaded with baguettes and spare ammunition), she will be coordinating the efforts of the resistance in her local district, ready to show the Prussians that France is not vanquished yet...

We also have one early recruit, who looks to be sporting some kind of volley pistol(?) - should be entertaining. Watch for this band to grow as this edition of the Challenge goes forward.

For refreshments on the balloon trip I thought French wine would be appropriate (actually, French wine is always appropriate, but I digress).  With these figures I enjoyed a bottle of blanquette, a sparkling wine from Limoux.

Sarah's Balloon transported me to a location called "Piper's Peak". Stay tuned for more on my submission for that location!
Posted by Greg B at 8:53 AM

Never seen civilian models for the FPW before - these look great!