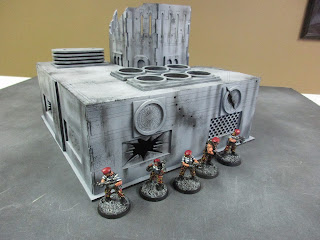 You know how it's so easy to let hobby projects languish when something new and shiny comes along? Well, I'm here to tell you that sometimes it comes back around... when it turns out that new and shiny thing is actually related to an old hobby project, and this creates some incentive to drag out the old project and finish it off! 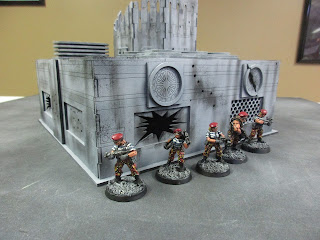 In this case, Conscript Mike had given me an MDF building he'd acquired that was surplus to his requirements. This is the "Blasted Power Station" from Wargame-Model-Mods (sic). It was a pretty straightforward model to assemble and covers a reasonably large area of table. Unfortunately, though, the roof is not removable so that limits playability in a wargame. 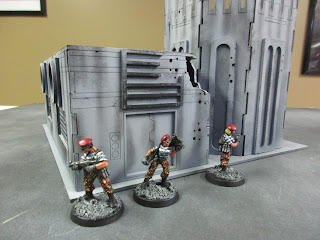 As the "new shiny" I referred to earlier was my current obsession with Judge Dredd and Warlord's eponymous wargame, I'll be putting on a Dredd game this week, and wanted to get this model cranked out, so I put the world's fastest paintjob on this one over the weekend. 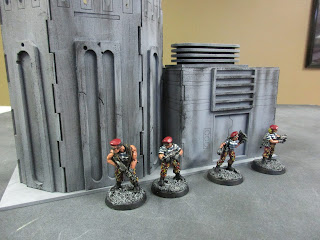 After assembly, I sprayed the model with flat black primer, then followed this with a mist of grey primer. Normally my next step would be to Nuln Oil the sh!t out of it, but unfortunately the magic Oil just beaded up and rolled off the primer like water off a duck's back! So I had to do the weathering old-school with drybrushed craft black and sponge chipping. 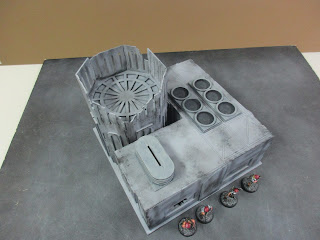 It turned out "OK" but not amazing, and I might do some further work in putting some graffitti on the walss - that might look cool, and the Dredd game came with a sheet of decals for that purpose. One thing I really liked, though, was that the roof vents and radiator stack are separate, so they can be positioned in different spots on the roof, or left off altogether. 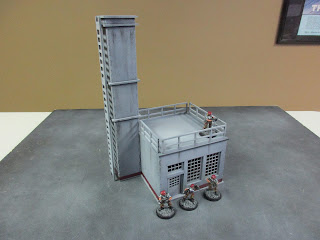 Along with the Dredd order, I picked up the "Factory Power Room" from Sarissa Precision. I also put it together last weekend and slapped on a pretty basic paintjob, ready for this week's game. 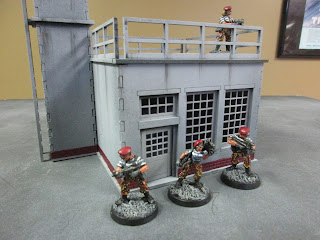 The latticed windows and detailed door are "greyboard" attached to the back of the wall. The models I've used for scale are from Wargames Foundry's "Street Violence" range - SVO14 Mercenary Fire Team. The roof is removable, giving some playability to the interior of the building, which I like. However the tolerances are so fine with the way the roof goes on, the MDF is easily broken... which I did. 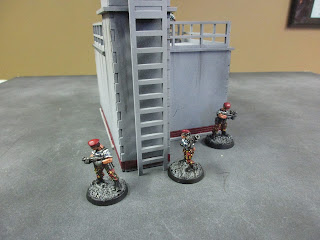 The model went up very easily and in only a few pieces, which is great. Again I did a pretty basic paintjob which I'll likely revisit... that ladder is looking particularly clean and that should be addressed. 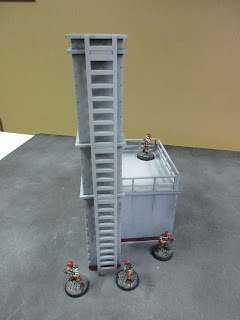 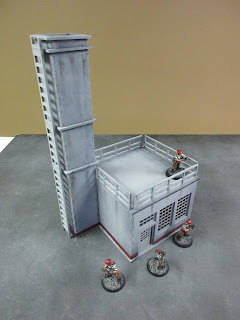 The model will pretty much work in any setting from WW1 to sci-fi - I just love the flexibility. As noted, the roof attachment is a bit fragile and might have been designed a bit better. It was super-easy to assemble, although a narrow file is a useful tool to have on hand. I reckon I'll go over the railings in dark grey and weather up the ladder a bit as well, and that should do it.

Great looking building. If you added some Health and Safety posters it would really pop.