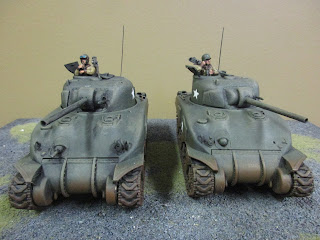 There's a bit of a story behind these models (the crewmen I mean). As readers will know, Conscript Greg B. is currently neck-deep in WW2 Winter Germans he's painting for the Analogue Challenge. As I'd love to see those models out in a game, I thought I'd revisit my WW2 Americans to see if I could tune some up to face them.

On my "American shelf" sit three Tamiya Shermans obtained years ago as assembled models. One has its hatches buttoned but the other two are open on top, but I've never had any US crews for them. Obviously this would need to be remedied immediately. 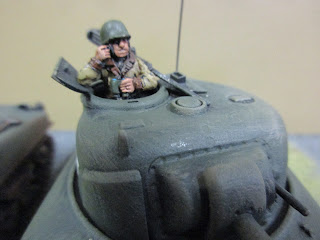 I commenced a search for 28mm US tank crewmen and came up with a few options. The best of these appeared to be Perry Miniatures' offerings, with four half-figures and two full ones for 7.50GBP (they also offered Brit crew which I picked up as well). 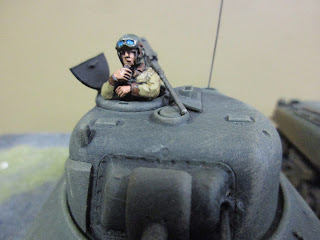 The models are well done, as you would expect from the Perrys. They might be a skosh on the small side for 28mm models, but fit well in the 1/48 Tamiya turret hatches. 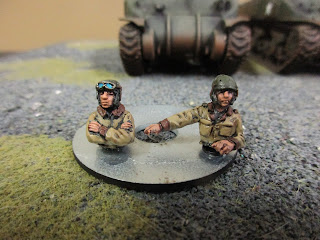 Here's the other two American crewmen. 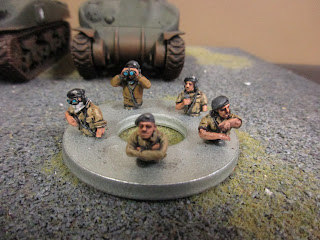 ... and the five half-figures in the British crew set. They look like they're set for the desert but should fit (for the most part) in Italy and NW Europe as well. 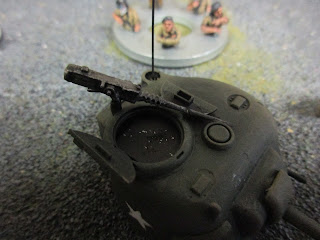 The issue was how to mount them in the turrets! I happened to have some thin ferrous metal bases handy so I superglued these onto the inside roof of the turret under the hatches. I then trimmed down the half-figures to the appropriate height and superglued 5mm magnets to their bottoms. Hey presto - swappable crewmen. Plus, they stick down nicely onto thick washers for storage! 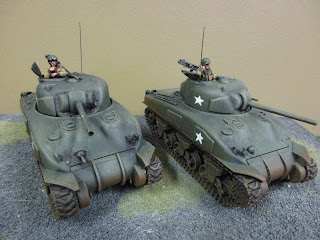 Two newly-crewed Shermans ready to face the Germans!
Posted by Dallas at 11:16 AM

Great idea for the tank crew

Also, neat idea to magnetize the crew. I am going to have to yoink that for landspeeder crew and such for Star Wars: Legion.

Looking great Dallas - will be a fun game when the time comes!

Love the magnet idea! I have used magnets for tank mounting machine guns but using them for crew is ingenious!