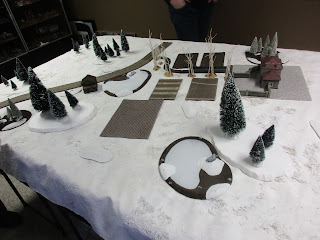 Last Thursday the group gathered at Conscript Towers for a game put on by Conscript Greg:

"We'll play 'Bolt Action' - using the 'Tank War' supplement and 15mm models.  The game is set in Hungary, January of 1945, and 50,000 German and Hungarian troops are trapped in Budapest, surrounded by Russian forces. The Panzers of IV SS Panzer Corps have launched a relief attempt, hoping to reach the Danube and the trapped defenders in the city, and also buy some more time for Germany to fight on.  The Panzers have caught the Russian forces by surprise, but Soviet Guards Armoured Regiments are now rushing to block them. Germans will confront the Red Army and the winter as they fight to break through Soviet defences." 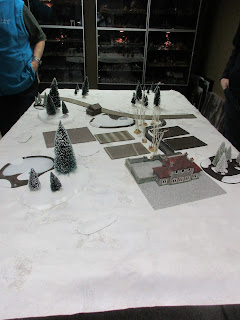 Here's the table: German short table edge at top, Soviet at bottom. Germans need to destroy Soviet units, but get more VPs for exiting their own units off the Soviet table edge. The rules used were "Bolt Action" of course, but unlike most of our BA games we played this one with 15mm models, most of which were tanks! 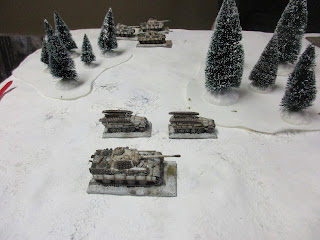 Conscript Mike F and I played the Germans and we had a straightforward plan: foot to the floor and devil take the hindmost! Our first activations were "Run" orders and we used the armoured troop leader's activations to order the other two Panthers with him. That worked well. 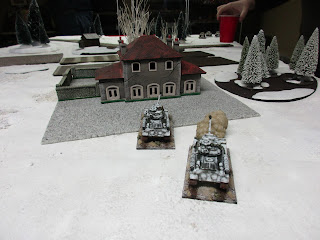 Of course the Soviets had to appear and mess up our plans... they had two IS-2s and three T-34/85s with two infantry sections against our four Panthers and two Pionere Hanomags. 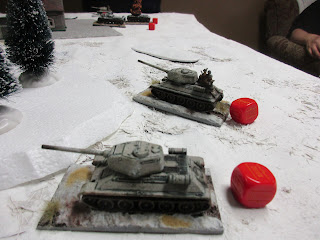 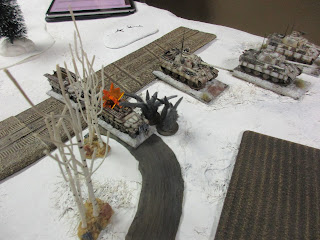 We started to run into problems about halfway across the table. The lead Hanomag was picked on by the Soviet tankers and despite surviving being set on fire, it was destroyed in the next turn. 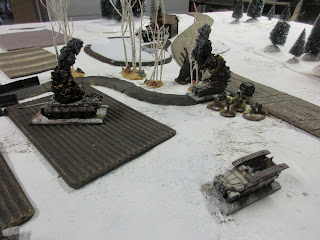 Here the second engineer track veers away from enemy fire in the direction of the Panthers, while one of the big cats burns in the field. Just past the trees another knocked-out Panther is visible - it was supposed to anchor our flank after daringly driving onto a frozen pond. While the ice held, the incoming 85mm round finished it off... 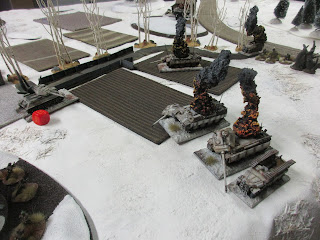 More bad news on the German left as the remaining Panthers are knocked out. We did manage to mislead the Soviets somewhat as to which vehicle was the troop commander's, because we'd lost track of that ourselves and were therefore quite believable... "Oh no, there goes the commander!" "Oh no, that's not him!" etc. 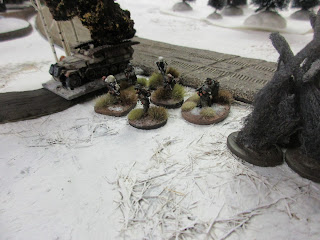 The surviving Pionier zug beside its crippled vehicle...

The game itself was super-fun but Mike and I underestimated the hitting power of the T-34/85s for sure. Those suckers lit us up comprehensively and no mistake. I'm not sure if deploying differently would've helped as the Soviets had several turns to get into firing position while we steamed across the table. This made it difficult for us to maneuver to minimize their firing solutions. The big cats sure looked awesome though.

Thanks Greg for bringing out the amazing looking game and to the boys for playing!
Posted by Dallas at 5:10 PM