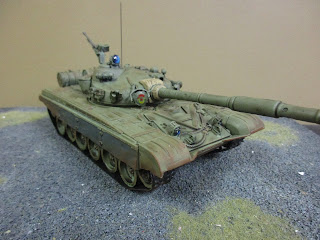 Back when the Conscripts started getting into WW3 in 28mm, we discovered a range of inexpensive modern tanks from a company called "Kitech" - never mind that the actual molds probably came from Academy or some other company. These models and the eBay source we got them from ("North Korea Store"!) live on as a reminder of those more innocent times ;-) 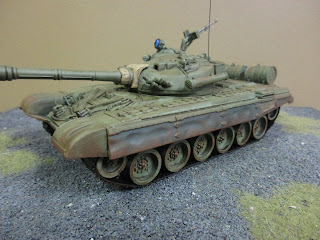 Anyway, with the recent completion of a set of Eureka's Soviet tankers, I figured that they should have a ride. I asked Conscript Greg for recommendations on resin T-72s, but in the end, I decided that the best option is the one you've already paid for, so I dug a Kitech T-72 kit out of the tub where it's spent the last 7+ years, and just assembled and painted the dam' thing. 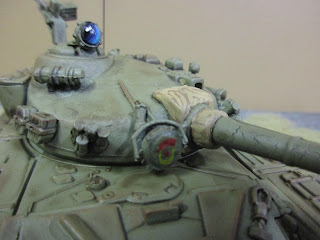 The painting part was super-easy - I primed black then sprayed a coat of Rustoleum Army Green Camo Paint. I'd initially thought it might be too light a green, but after a coat of Agrax Earthshade it looks suitably Soviet, albeit maybe a bit faded, which is OK. The rubber skirts were painted with a mix of Catachan Green and Mechanicus Grey, then the whole model was lightly weathered with drybrushing in shades of brown. 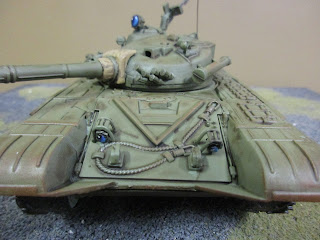 The kit itself is funny... it's based on a motorized chassis that is shared in common with all of the models in the Kitech modern AFV range. So not only does the T-72 share a chassis/platform with the T-80 kit, it's also shared with the Merkava, Leopard 2, M1 Abrams, etc... meaning that the notional 1:48 scale is just that - notional. 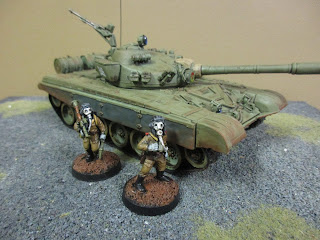 The result is that the T-72 is somewhat larger than it should be... this is especially evident when compared to 28mm infantry models. It doesn't look bad in the foreshortened picture above, but the Kitech T-72 is quite a bit bigger than it should be, I think. However, back in the day, when true 1:48 or heaven forbid, 1:56 models of modern AFVs were not readily (or inexpensively) available, the North Korea Store came through with these models for something like $5 each. Good enough!
Posted by Dallas at 7:15 PM

Great work on this one Dallas - yes, the "Kitech" kits bring back many great memories of collection escalation!