Last week I set up our first game of Judge Dredd, the new 2000AD-comic-themed miniatures game from Warlord. I've always been a huge fan of Old Stony Face and the insanity that is Mega-City One, so I have jumped into the new JD with both feet... at the very least, it'll give some renewed impetus to paint some of the OLD Dredd models I still have from the last miniatures incarnation - Mongoose Models' "Gangs of Mega-City One". But anyway... 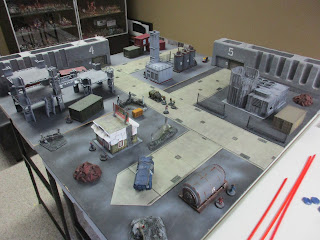 Here's the 4x4 table set up for the game. The story: Jane Goodall Block Citi-Def has been running an armed exercise in an industrial area of the city bottom, and complaints about gunfire and general arsing-about have been received by the Justice Department. As the JGCD has previously been warned, this incident has escalated to Judge intervention and a Pat-Wagon was dispatched with Judges Fraser (a Veteran Street Judge) and Gregg (a rookie Judge) aboard.

We pick up the game with the two Judges in the middle of the table and the Jane Goodall forces (Eureka Miniatures' excellent "Boiler-suit Apes") about to spring an ambush... 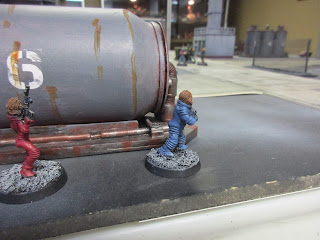 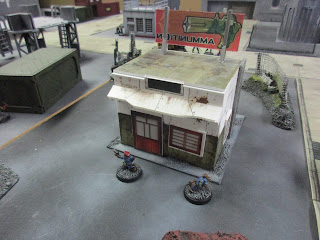 ...while the Gibbon squad waits under cover. The JG apes had to deploy at least 12" from the two Judges and out of their line of sight. 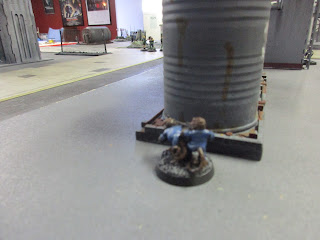 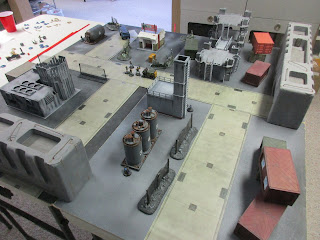 The view from the other side of the table. 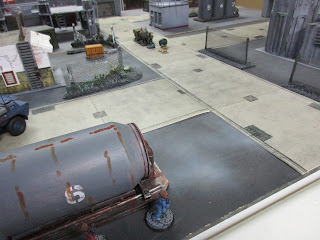 In his first activation, the JGCD squad leader targeted Judge Gregg, causing some injuries... another ape also activated and put her out of action even before she could activate, herself! Conscript Greg notably failed to roll a single "Shield" result on any of his Resist dice :-( 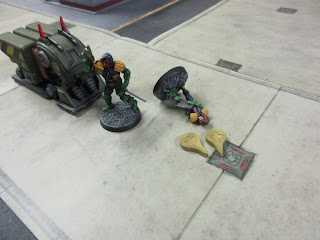 Disappointing development for the Justice Department side, but Judge Fraser activated next and Conscript Mike had a cunning plan... 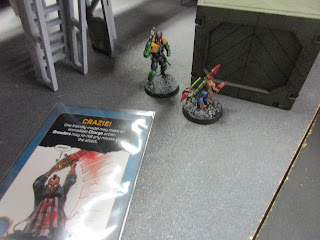 He took a Double Action to run, then played the "Crazie" card to take another immediate Charge action, catching the rocket-launcher-toting gibbon flat footed... a light beating with daystick put the Jane Goodall Blocker out of action. 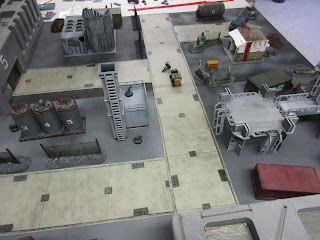 The sensitive simian hearing of the Jane Goodall Blockers picked up the approaching sound of sirens... 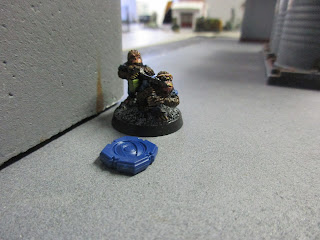 ...knowing that a Lawmaster bike was on the way, the simians shifted around to Overwatch the road entrances. 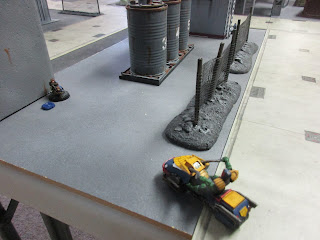 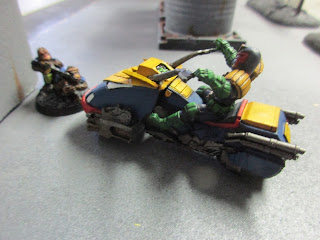 While the simians blazed away with their heavy spit gun, they failed to stop the bike... and Judge Burch dropped them with his Lawgiver pistol. 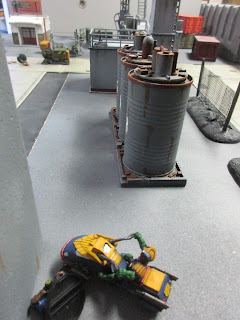 On his next activation, the simian on top of the power building (top centre) shot at the Lawmaster, immobilizing it! Greg's lousy die rolling continued... 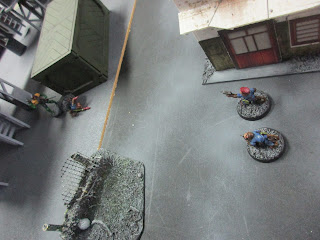 Meanwhile, Judge Fraser was under attack by gibbons with spit pistols... 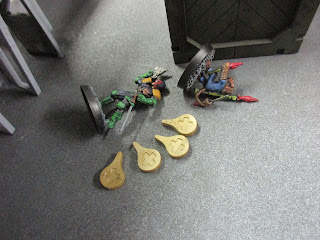 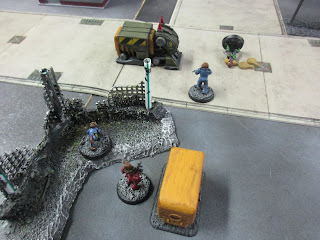 The simians in the middle moved up towards Judge Burch... 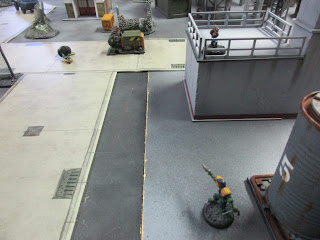 Who had dismounted from his now-immobilized Lawmaster bike. 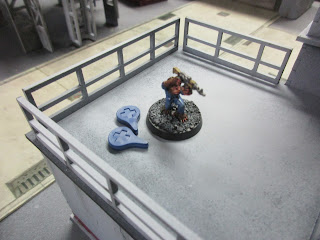 The gibbon on the rooftop moved towards the middle of the roof and took a "Hunker Down" double action to rid himself of an injury marker. 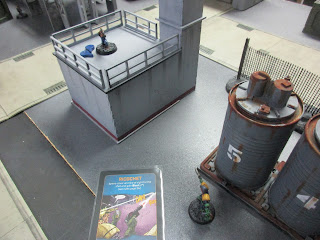 However, in true Dredd fashion, Judge Burch activated and played a "Ricochet" Armoury card, allowing him to bounce a Lawgiver round off the tower and into the rooftop simian, ending his gibbon adversary in true comic-book style. Nice one! 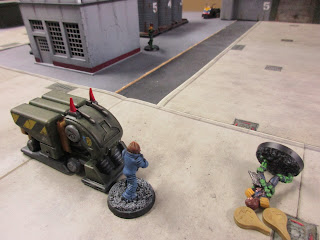 But in the middle of the table, the Jane Goodall squad leader broke cover... 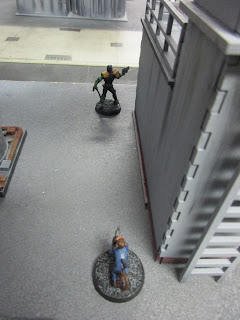 ...while behind Judge Burch another gibbon lurked! 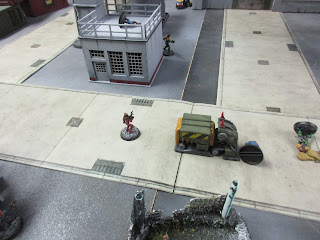 The simian squad leader blazed away at the Judge, who used his "Gunfighter" trait to shoot back and wound the ape, who was himself killed in a volley of Bike Cannon fire. 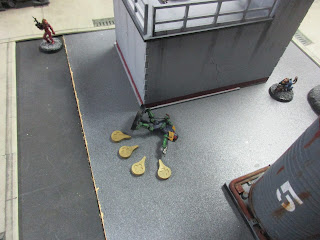 Judge Burch was finished off by a backshooting gibbon, of all things, and we called the game at that point, with only an immobilized Lawmaster left on the Justice Department side. 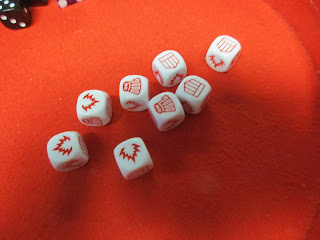 The objects of Conscript Greg's fury... a set of extremely uncooperative special dice supplied with the game. The faces bear three explosions (denoting hits), two shields (useful when making Resist (save) rolls), and one special symbol - the 2000AD logo, needed to make tests against a model's Cool characteristic. Greg never seemed to get any traction with these, as his rolls always came up with exactly the symbols he didn't need.

In the end, it was a pretty fun game, and for a first try I reckon we got 80% of the rules right. Drawing chips for activations is a fun mechanic, but we saw the downside in this game with the severely outnumbered Judges having a tough time. I think in games with a more even number of opponents it'll work even better. I've got my East-Meg/Sov Judges and Sentenoid (from the old Mongoose kickstarter) primed up and once they're done it'll be time for some Apocalypse War gaming!
Posted by Dallas at 11:33 AM

I await the opportunity to get a bit of revenge...no, wait, I mean, to "restore order" to this portion of the City...

Nice report it all looks fab!

Thanks for the comments! Made some good progress on the Sovs over the weekend so look for those soon!

Great report. Got these rules on order and looking forward to trying them out