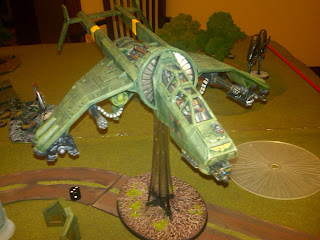 After preparing a Tyranid army in near-record time, Dallas hosted a game of 40k this week, pitting his bugs against a mish-mash of my Imperial Guard. The game was based around one of the soul-less, abstracted non-scenarios from the current 40k rule book, "annihilation", in which victory depends on wiping out entire units from the other side. Each side would have 2000 points worth of stuff, which equals many, many bugs and lots and lots of Imperial Guardsmen.

To give the game plot some actual colour, the Imperial force was split into two - one component was comprised of the Elysian drop troops I have painted to date, and my regular blue mechanized Imperial lads would comprise a relief force. The Elysians would start on the table, holding an objective (Dallas' excellent Imperial Bastion), and the rest would be in reserve.

The Elysians amounted to about 700 points - three squads of veterans, included one loaded down with melta-guns (which are truly awesome - man, am I going to get some more of those guys put together). They were backed up by some fun flying/skimmer vehicles - a Valkyrie troop carrier, and a Vulture gunship mounting twin-linked punisher cannons. The relief force comprised a mechanized platoon with three squads in Chimeras, a squad of armoured sentinels with autocannons, a Leman Russ Vanquisher and a Leman Russ Demolisher.

The Tyranids had...well, lots of Tyranids - big ones, small ones, ones that eat vehicles, others that eat people, some that emit psychic blasts and a particular one that emits some kind of faintly toxic miasma. The one I focused a lot on was the Trygon, an evil, massively large and cool model that appears out of the ground and begins to wreck your sh*t. I am not knowledgeable enough about 40k or the Tyranids to detail the overall force properly, but think this entry from the blog gives a good idea of what was coming for dinner, so to speak. I can assure you it looked damn cool!

Dallas and Mike F. locked in as the Hive Mind, while I rolled with the Imperial side, and Brian H. was on hand to observe and mock all of us as needed.

The game was well-fought draw. I managed to wipe out six of Dallas and Mike's units, and they wiped out a similar pile of my lads. Here are some pictures. My favourite is the Trygon appearing behind the squad of Elysians - was a classic "I've got a bad feeling about this" moment. 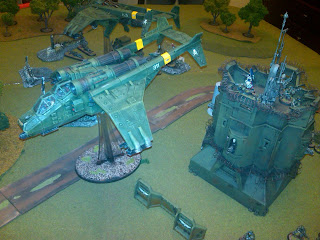 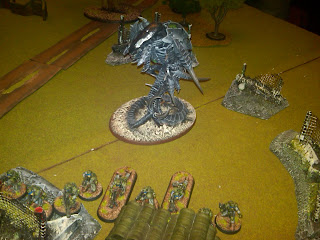 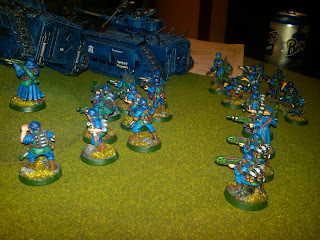 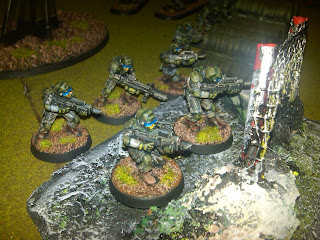 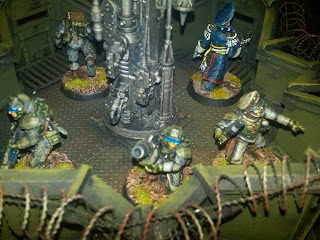 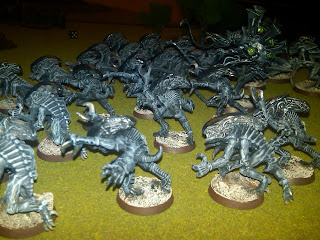 Most of the Elysians became calories for Hive Fleet Nostromo, but they gave a good accounting of themselves on the way out. The mechanized platoon did a reasonable job. The sentinels, useful throw-aways, did a great job in tying down a big squad of Tyranid warriors. The Trigon went on a tear, but I think it is fair to say Dallas and Mike were hoping it would eat more than it managed to before my panicked, curse-laden heavy weapon fire brought the thing down. On the other hand, they got to enjoy me freaking out about it, which is hard to quantify as a points value, but certainly can be fun.

Lesson for the Tyranids - don't spread out. You don't need a pincer movement to sit down for dinner. The bugs tried to come from some different angles, and it didn't pay off too well in the end. Another disappointment seemed to be the Zoanthropes (?) - the psychic blast bugs. They had to roll to pass a check to see if they could use their power, then roll to hit...it was a pretty big let-down at times for Dallas and Mike (and, of course, fun for me).

There were several lessons for the Guard. First of all, Veteran squads are awesome. I think I will make my Elysian troops pretty much a veteran concentrated force. Each squad counts as a troop choice. They have a BS of 4, can have multiple special weapons, and you don't need to waste points on junior officers and their flunkies. (Unless of course I got that totally wrong - you never know, as I freely admit to messing up when it comes to the Byzantine rules and regs of 40k codices).

Second, tanks are not as cool as they used to be. I remember a great section from the book "World War Z", where a veteran from the "Battle of Jonkers (sp?)" talked of what a let-down it was to see a tank plant a main round into the Zombie horde and nothing happened. That's what happened to the Imperial Guard in the game, where I would land tank rounds into the big bugs (Hive Tyrant, etc.) and they would simply take a wound. Yikes! It's not like the tanks don't have uses (and the Demolisher wiped out a whole brood of 'stealers in one shot) but I over-estimated the ability of tanks to take out the big bugs.

Finally, Valkyries are fun, and the Vulture with the Punisher Cannons is REALLY, REALLY FUN! It only got to fire one time (understandably, Mike and Dallas spent a lot of effort to bring that sucker down), but that was SWEET. I may need another one of those for the Elysians!

In terms of the overall game itself, playing 40k continues to be a struggle at times as the current rules compel the abstraction of fun while specifying absurdity in great detail. As a house rule, we did away with the utter stupidity that is "true line of sight". I think the next rule we will consider doing away with is the current treatment of blast weapons, in which you roll 2d6 and and a scatter dice, and subtract your model's BS from the result - EVERY TIME YOU FIRE THEM. It is utterly and completely ridiculous, and as a game mechanism, not that far removed from flicking a piece of paper on to the table to see where you hit. Considering the thin regard many current 40k fans have for the game mechanisms of the original Rogue Trader rules (in which nearly all blast weapon shots "deviated") I am surprised they tolerate this absurdity in the current edition.

I also broke a few bolts when I realized that close combat attacks on vehicles are ALWAYS on the rear armour. In hindsight, the rule makes sense - that's what you get for having tanks unsupported by infantry (not that I think a squad of guardsmen would have done much against the !#$!@#$ing Trygon, or that a huge monster is really "infantry", but anyway). I'll keep that in mind next time I roll the tanks.

Of course, no matter how much 40k rules suck, they never wreck cool models and fun opponents! The game was a hoot, and looked really cool. Thanks to Dallas for hosting a great game! I look forward to returning to the table with a full 2000 points of Elysians, completely kitted out with all of their Valkyries...
Posted by Greg B at 9:02 AM

fex spam (albeit with a "bad build")

Fun game. Deviation of every blast marker drove me crazy. The much-lauded Zoanthropes ("essential for their AT capability") did pee-all. Psychic checks were a doddle at Ld 10 but could we roll a 4+ to hit? Naw....

A T6 Trygon is great but I think he lost 3 wounds to lasgun-toting Guardsmen...? Hive Tyrant never got into CC, Fexes only ate a stupid command squad... You are right, Greg, with the bugs it's "hey diddle diddle, straight up the middle" (or in the alternative, hug one table edge ;-), leave nothing in reserve, and get stuck in all together. Watch out Mike, I've got your number... "Om nom nom delicious Space Marines..."

I think we did OK on remembering all the special rules though... except "Infiltrate"... damn.

Just let me get that Chapterhouse order for the Sternguard. It should be interesting killing a Trygon with bolters! (That gloat should ensure that the unit suffers the most appalling luck in my history of wargaming)

Greg:
Melta is the new black for 40K 5th edition.

"Vet spam" and "melta spam" are indeed one solution for monstrous creatuies. We agree to disagree about true LOS.

I agree, "Annihilation" is a poor scenario. "Kill points" make no distinction between the power/capability of different units. I do reccomend playing the various tournament scenarios that are floating around the net - they often have intersting, objective-based themes and stories.

I do like the "relief force" aspect of this particular game.

One way I've seen to make KPs interesting is to only have 5 KPs per army, and have some variant of the owning player and/or the opponent pick them. You get an idea what's valuable to a force.

(Says the guy with the skimmer- and melta-spamming cheesy Eldar.)