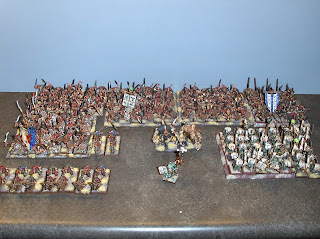 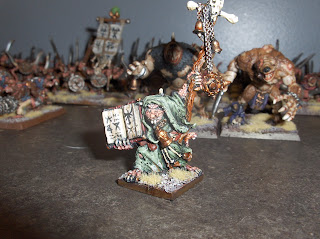 ﻿...one suitably grungy-looking Plague Lord to lead the army into battle!
Next up in the painting queue are some more characters - Moulders to herd the Rat Ogres and giant rats, a Warlock Engineer or two, a Grey Seer maybe...?  Then back to painting rank-and-file - Stormvermin - and maybe a Plague Furnace?  I just picked up a set of Skaven from the new Island of Blood box so it promises to be a Rat October indeed!  ﻿
﻿
Posted by Dallas at 11:21 PM

You are painting faster than rat can reproduce. The colors really evoke crawling vermin. How many points do you have so far?

The cheapest unit in the Wood Elves army is a Glade Guard at 12pts... The two regiments and two heroes are worth about 750pts. Wood Elves will certainly need lots of ground to run away from these rat packs while trying to shoot them down.

Nice work, Dallas! I love those jezzail teams. That's going to be a massive force when you get it all completed. Do they still have that crazy warp-fire 88 cannon thing that could shoot through terrain?