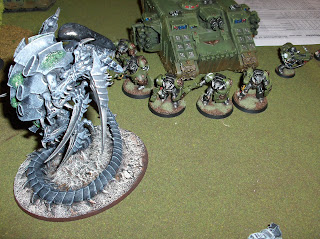 The Tyranid hive fleet Nostromo has been allowed to rampage across the galaxy once again thanks to the most recent Imperial effort. Local guard units had requested aid in mopping up operations after a hard fought but successful encounter. The Chapter that responded was inexperienced, only moderately successful on the battlefield and not up to the task at hand! After a bloody battle involving horrific casualties on both sides, the Tyranids controlled the majority of the pre-designated objective markers.
The current mood in the Chapter is grim with some openly wondering if Tzeench or maybe even Slaanesh are hiring. The Chapter has also noticed that their schedule for the next few months has cleared up considerably. When confirmation was requested for the cancellation of an operation in support of an Imperial planet fending off an Ork attack, the Imperial commander confirmed that “things weren’t as bad as originally thought” and “may even turn around in the next month or so!” He went on to say, “recent casualties have unexpectedly improved our food situation, so there really isn’t any need for your Chapter to show up. Thanks anyway.” 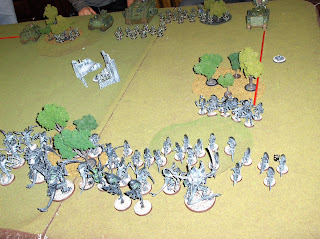 The Chapter has recently begun exploring other opportunities in bulk transport. Imperial Long Haul Transport Inc. has expressed interest in leasing some of the vast cargo space now available on the Chapter Battlebarge. The Chapter Master was quoted as saying, “We really think that this is an exciting opportunity that can really propel our Chapter into the big leagues of bulk transportation. The future’s never looked so bright.” 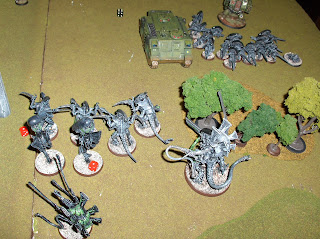 All kidding aside, the game was a bloodbath and thus a lot of fun and I was able to use some units that I've never used before. Some of them showed promise... before eating it hard! The most interesting units were the Sternguard and Assault Terminators. The Sternguard killed one Carnifex and reduced another one down to one wound in a single round of shooting, while the Assault Terminators killed a Trygon, but died to a man doing it. I think the big lesson is to consider how many wounds these units can realistically cause in a single turn. 8 wounds for two Carnifex are too many for the Sternguard and 6 wounds on the Trygon are too many for 5 Assault Terminators. Shooting needed to knock both those units down a few wounds before either of those units did their thing. In particular, I think causing a few wounds on the Trygon before assaulting would have made a big difference for the terminators. Although Greg is probably right when he said that Terminator are not worth their points. I certainly wouldn't take them in anything less than 2000 points.
Thanks to Dallas for hosting and everyone who came out.
Posted by MFraser at 1:47 PM

I added some pics to the report - thanks for writing that up, Mike! Don't worry, you'll get the last laugh in when I play Dave :-(

We get to have the same battle again in fantasy. Skaven vs Bretonnia. I honestly can't see how Bretonnians can win that one! However, it should be fun trying.

That was kind of Mike not to point out that by utterly failing to nip that last wounded Carnifex, I basically cost our side the game....