Dan and Stacy came to play the Battle of the Nile, a scenario that I've been working on for some time. The challenge was to create a fun naval battle with ships at anchor and one side being pounded to ashes. Instead of a classic French vs British engagement, I've decided to split the British fleet among the players and have the French ships operated by automated rules. Rear-Admiral "Dan" Nelson and Captain "Stacy" Foley would then be competing against each other for greatest honours!

Here is the set up, with only the van and center of the French line. The British would start the game within the zone delimited by the dice. There were two forts on the shore that did not do much damage during the game, just like it happened in History. 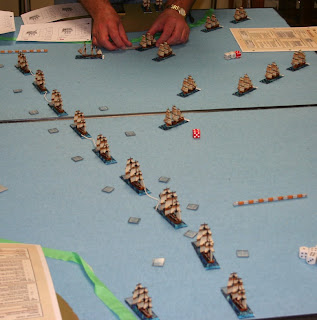 Foley's line, at the top, prepares to circle around the French van while Nelson's column resolutely approaches the center. The counters by the French ships are the anchor positions that the British ships were supposed to reach before nightfall. 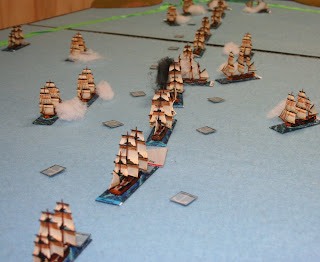 Half of Nelson's squadron just went through the French line which is being pounded from both sides. White puffs of smoke were helping the commanders keep track of which ships fired. In the background, Foley's line is shooting intensely on the French van.

This is just before nightfall. Ships with yellow/green counters on their bow are using backing sail to slow down to their anchor positions. On the left, four British ships are firing simultaneously on the huge Orient. Despite many close calls, the giant of the sea did not blow up. On the other hand, the Aquilon sank. The wreckage can be seen near the black centerline. At that point, the fate of the French fleet was sealed, and the competing commanders were racing to perform the most glorious actions for honours.

On the last turn, the Tonnant was set ablaze four times! When compared to the real battle, the end result is eerily similar. All in all, despite the scenario being playtested for the first time, it was a very enjoyable game. Even with over 12 ships on each side, the game ran smoothly. The tactical challenge to the players was to position their ships as best as possible before nightfall so as to gather as much battle honours as possible. In the end, Captain Foley got 450 points of honours and Nelson got 425. A few adjustments will certainly make the scenario a little more challenging and even more entertaining.
Posted by Sylvain at 3:02 PM

There's something about seeing such long lines of ships under sail.

Great looking game Sylvain! That close-up shot of the ships wreathed in smoke is brilliant. Wish I could have been there as it looked like a lot of fun.