Letting go of the Farseer crutch 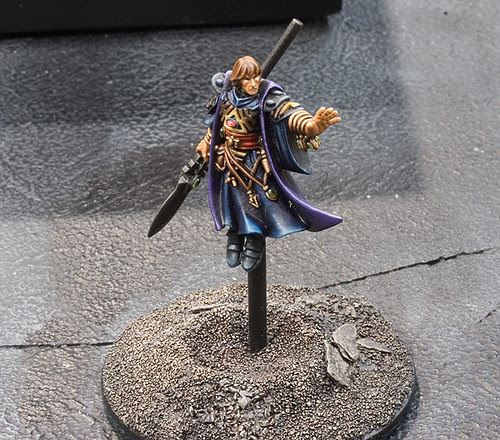 I have started preparations for next year's Las Vegas GT. Games Workshop just sent out an email regarding the next several qualifying tournaments, and it mentioned that the GT winner "...will be decided in the summer of 2011 in Las Vegas at The Throne of Skulls Tournament..."

The U.K. Throne of Skulls Rules Pack and FAQs are already available online, here. So, assuming the same criteria for Las Vegas, we're talking 1500 point armies and standard missions from the 40K rulebook.

I've been thinking about my Las Vegas GT list for awhile now. Also, I had some good conversations with the other players at Mechani-Kon 2 last weekend.

As a result of the above, I ended up re-jiggering my Eldar list, with a couple of purposes in mind:
The force has been streamlined by getting rid of psychic entirely. There is a single HQ - I'm using my levitating Farseer model (pictured above) to "count as" Prince Yriel, a hybrid Autarch/Warlock and the cheapest of the Eldar named characters. This character is interesting, since it combines the stats and skills of an Autarch with a couple of psychic weapons, the Spear of Twilight (a Singing Spear that's also a Power Weapon), and the Eye of Wrath (a single-use S6, AP3 Large Blast, that can be set off in close combat). Dverning has written an in-depth tactica discussing the use of Yriel in games, including the dreaded "Yriel Bomb" ploy, located online here.

With the extra points saved, I've also packed protective upgrades onto all the tanks, and added Powerblades to the Warp Spider Exarch.

The result is the following, a purer Swordwind style list:

I took it for a test run the other night against MikeA's Nurgle army. Mike came loaded for bear, running the following:

We played a tables quarters style scenario from Mechani-Kon. MikeA played well, initially controlling or contesting all quarters, but the mobility and durability (durability - wtf?) of the Eldar proved too much for the Chaos forces. The turning point occurred mid-game, when Typhus and his bodyguards fell to a fusillade of melta and shuriken fire.

I look forward to further play-testing. This is probably the first time I've run Eldar without any psychic powers in over a decade.

Not having psychic powers in a 40k army sounds awkward, like perogies without sour cream or Games Workshop without a marketing strategy. That said, last time I've played 40k was 5 years ago.

Five years ago, eh? Ah, the days of 4th edition, when the Falcon grav tank was King...

I'm considering a couple of other options for my GT build. One downgrades the HQ slot to a single normal Autarch and removes some of the vehicle upgrades. In return, there would be even more(!) Strength 6 shooting. Good for stopping most transports and for killing Marines.

I knew it! I always suspected you of using psychic powers when playing 40K. (it helps me to rationalize away all the losses) It's good that you've come clean about this. Not to mention that they're not too big on psychics in Vegas... ;)

After further analysis (both commisioned and personal) I've made some judicious purchases and dug up some unpainted figs. The GT list is now set as follows: