Okay, Greg has been going great guns on his Napoleonic Austrians and I thought it high-time to show that I've not been doing nothing these past few months since I issued the Challenge. I have a ton of Foundry metals from past purchases but I also bought a schwack of the Victrix plastics as they have the early French in their bicornes and long coat-tails which I like the look of. The Victrix stuff is great but putting them all together can be a little crazy-making. Nonetheless, I do like the ability to build unique units without too much hassle. Here are a few 'raw' unpainted figures which have been arranged for a command stand concept. 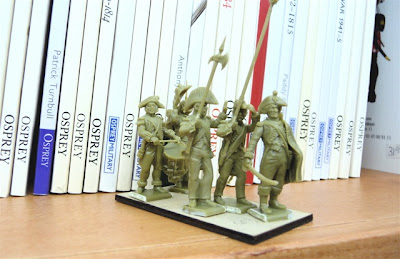 The cool thing about the multi-pose plastics is that you can build a unit incrementally to flesh out an idea for an overall theme. The box came with a couple mods for guys raising their hats and I thought I'd do a whole battalion that is in the midst of a impromptu salute. I envisioned a scene where the Colonel is passing along the praise of the brigadier to the battalion and particularly the colour party for covering itself in glory in the past engagement. The men are loving it, with lots of back-slapping, musket-waving and shouting out "Vive le Starbucks" or something. 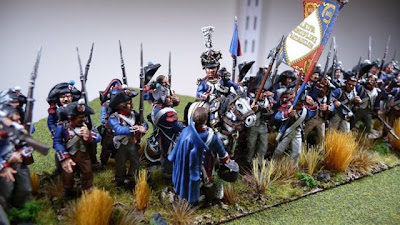 I have a hard time getting used to how light these guys are. It kinda freaks me out as I'm used to a certain heft with a unit of this size. In retrospect I'm happy I went with metal bases as I'm thinking they would otherwise blow away with a good sneeze. I also prefer the lower profile to the bases - the figures seem more part of the playing surface. 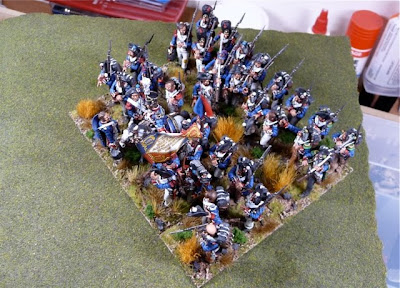 The other thing I wanted to try with this unit was to place figures and groundwork into the 'dead space' at the front of each base. I reason that this way when the battalion is placed into column it looks a bit more integrated between the lines. Technically this would be rated as a 32-figure battalion in Black Powder or Republic to Empire but it has a few more models in it as I prefer a more packed-in look. There are a couple light conversions in there with guys holding their bicornes, bearskins and shakos. There is also the obligatory bald guy to commemorate my own follicle-challenged status. 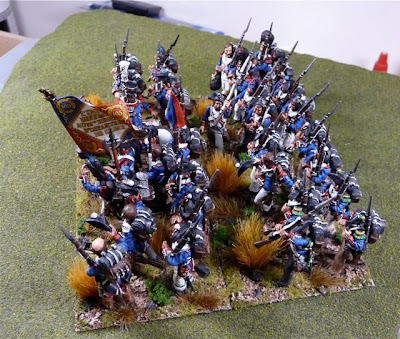 I wasn't really sure on the autumnal groundwork colours but I think I like it now. It seems to give more variability to the overall colours instead of just seeing a mass of blue and white. I've got a bunch more models painted (no, really) but I'm waiting for some more 'filler' NCO/junior officer castings from the Perry's, Foundry and Sash and Saber to act as file closers. I'll post another update once I have a brigade's worth based and their groundwork completed.
Next up: French Dragoons!
Posted by Curt at 2:59 PM

Fantastic work! Where did you get the metal bases?

Thanks Dal. The bases are from Jeff at 'Wargames Accessories'.

He'll also custom cut pretty much anything you can dream up.

The stands look somewhat like those units depicted period paintings.

Looks awesome man - will be great to hit the table when it is all ready to go...