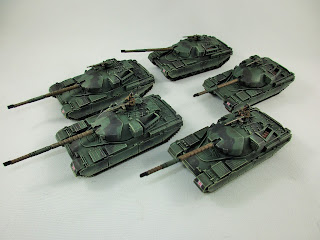 Team Yankee has (obviously) been a thing around here and with the completion of my Bundeswehr force, I'd been considering building an "allied" army to chip in here and there. The British look favourite for a smaller force so I put a Chieftain troop on my Christmas list and Santa delivered. How lucky am I??? 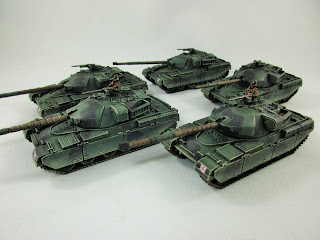 The Chieftains were pretty easy to assemble but were a bit more complex than the Leopard 2s I'd built previously. There are some stowage options provided as well as a variety of crew for those, like me, go for that sort of thing. The kit comes with both regular and "Stillbrew" (composite reinforced armour) turrets. I went with the Stillbrew variant as it offers one point better front armour, albeit at the expense of performance in difficult terrain. Must be the front-heaviness of the extra armour package. 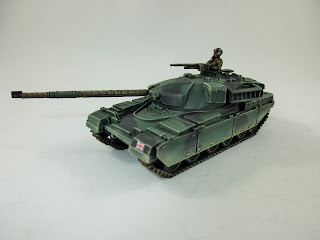 I basecoated the tanks with GW Catachan Green highlighted heavily with Vallejo German Uniform. The camo pattern was applied with a mix of Abaddon Black with a hint of Mechanicus Standard Grey. After a wash with Nuln Oil the whole vehicle was drybrushed with Ushabti Bone and some light dusty weathering applied with the same colour. 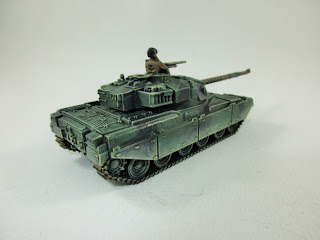 There might be a little more detail work to do around the cupola I had the photo booth set up I wanted to take the pics.

I didn't apply any decals other than the Union flag on the offside front fender and the number plate. I wanted these guys to look pretty fresh into the front lines. 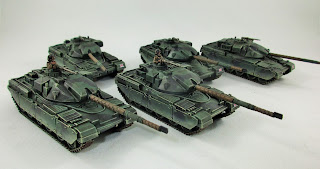 The mech infantry platoon I got from Conscript Greg for Christmas is primed and the "Iron Maiden" book and Lynx helos are on the way... just need some FV432s and I'm waiting for them to be offered by my favourite UK ebay seller. With those done my small British force will be in good shape.

Also, if you get a chance, read this: 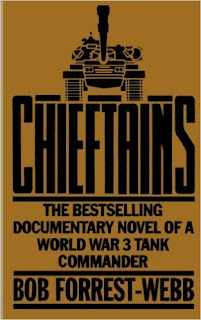 It's a very cool book about... Chieftains mainly, but also some recce dudes and an M1 Abrams crew, set in the first days of World War III. You can buy the print-on-demand trade paperback here. Very evocative stuff and pretty chilling. Let's be glad it never happened, and hope it never does :-)

Looking great! There's no tank sexier than a Chieftain!

Fantastic work Dallas - these are looking really good. And Chuck is correct...the Chieftain is a damn sexy tank...