Curt's Analogue Hobbies Painting Challenge has bonus theme rounds every two weeks.  The first was "Armour", and the second one this past weekend was "East".  For this theme I rummaged through my "pile of shame".  This pile is comprised mostly of figures and models I purchased thinking they would be so awesome, and then balked at painting, for whatever reason, once I received them.  It follows me around when I move, mocking me when nobody else is around... 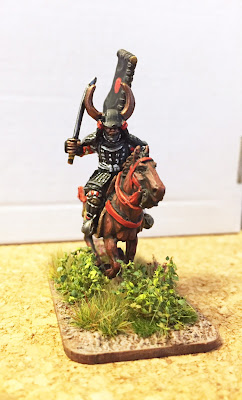 In the case of this figure - a 28mm Samurai from Perry Miniatures - the issue was the subject matter itself. Samurai wear very ornate, complicated armour, and the era of their conflicts is one I am utterly unfamiliar with.  Research can address these challenges, but I find in the case of the Samurai it was all too much.  I painted exactly one Samurai for Curt in a previous painting challenge years ago, and put the rest of these figures away, not wanting to paint them but unwilling to simply get rid of them...no wonder my basement is such a mess. 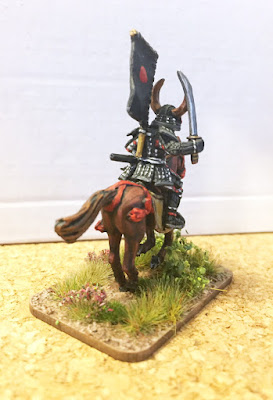 Anyway, this theme round offered an opportunity to try another Samurai.  It was as frustrating to paint as before, mostly as I had no idea what I was doing and I tried to simply imitate some images of painted figures I saw on the Perrys' web site (I assume those painters would know their sh*t, after all). 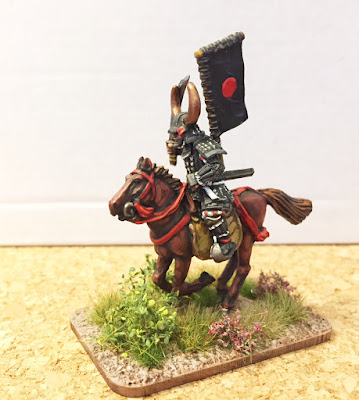 In the end, I'm glad I stuck with it, as he looks OK, ready to cut someone down to size. Damn, I wish I could figure this period out...it would sure be fun.

Apparently there are some skirmish rule out there for Samurai, so who knows, maybe I can finish a few more of these figures and actually use them in a game? For now, he'll sit on my shelf as a stern reminder to at least occasionally try and think sh*t through before I make an order...

There are some really great entries in the "East" theme round, including some pretty amazing stuff from Byron.  Be sure to visit the page, and vote for your favourites (might I suggest this one? I like prizes!).
Posted by Greg B at 11:04 AM