For sci-fi skirmish games like Necromunda and Infinity, you need a LOT of terrain. Otherwise, people will just hunker down their models in cover and blaze away at each other from across the table, with hits coming due to sheer luck. As someone described it, "Yahtzee with toy soldiers".

I have managed to add to the terrain to be used in the continuing Necromunda campaign.

I watched the Ghost in the Shell movie trailer. There are several vertical elements in The Major's New Port City skyline. Years ago I had painted up a KFC Col. Sanders piggy bank for a themed 40K mega game I ran at Campaign Outfitters ("The chicken shack at the end of the universe," or some such thing). I dug it out, fixed up some scratches and dings, and "Voilà", a tribute to an unnamed despot from Necromunda's ruling planetary elite. Any resemblance to certain Asian dictators is purely coincidental. 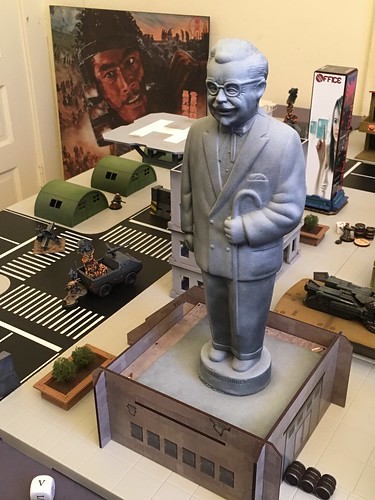 Anenoceti's Workshop had  Kickstarter last year, providing lots of different kinds of terrain elements. I picked up a tall, Blade Runner-esque video billboard. It's also a dice tower; the top comes off and one of the benches pulls out, with the dice falling through baffles on the inside. They offered several different optional ads. Unfortunately, this piece is not yet on their website for sale. It's basically ready to play; I only had to affix the ads, assemble the parts, and paint the benches, I think I and local Infinity gamer DerekY are the only guys in Western Canada with this kit. 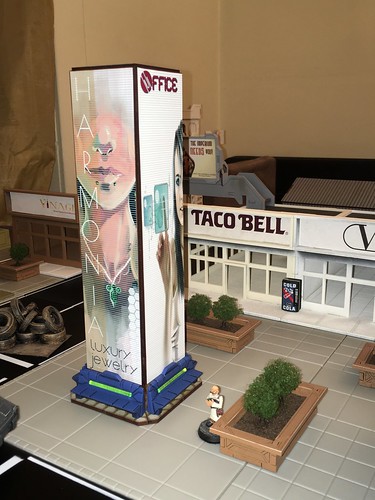 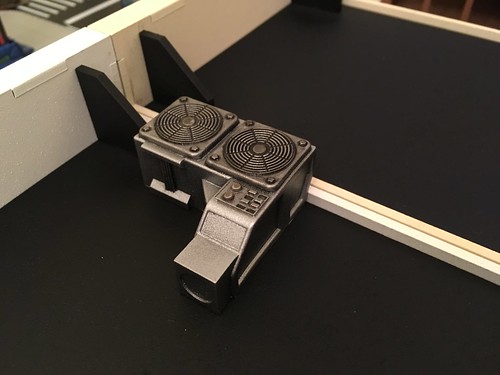 Awhile ago I had got from Conscript Byron several MDF kits. The guard tower below is one of them. The roof comes off, allowing figures to be placed inside the structure. 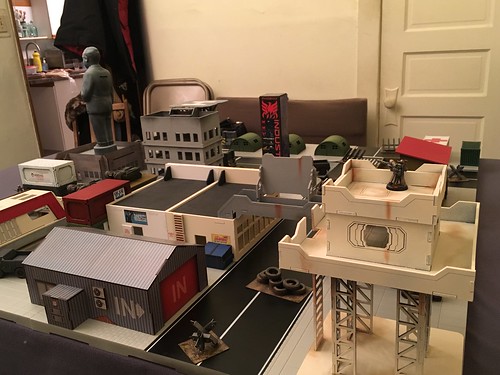 Byron also made a few types of billboard that affix to 3mm MDF terrain. I found the Imperial recruiting poster online and printed it out. 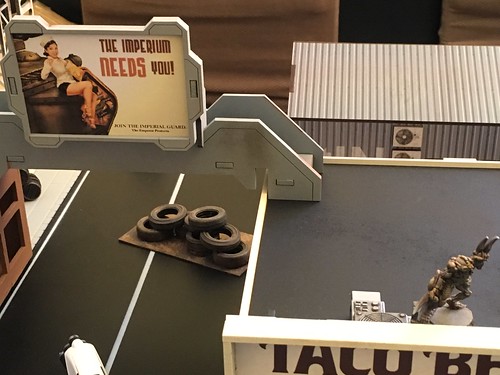 A couple of years ago I picked up some holo ads from Micro Art Studio. These are beautiful pieces, with clear acrylic "holograms" with translucent printing on them. Fair warning: the kits themselves are bears to put together. You cannot add the acrylic after assembly and painting, because of the way the pieces fit together. Also, the pieces are a tight fit without paint. After painting with just a layer of spray paint, I had to use a claw hammer to drive some of the supporting pieces into the frame. 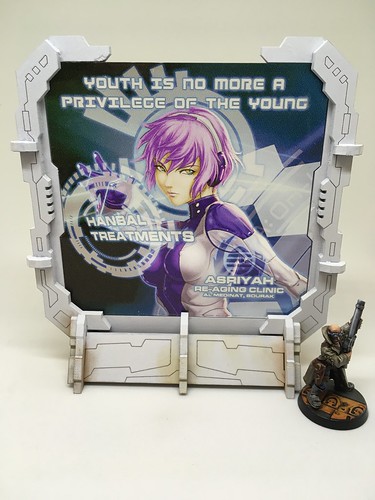 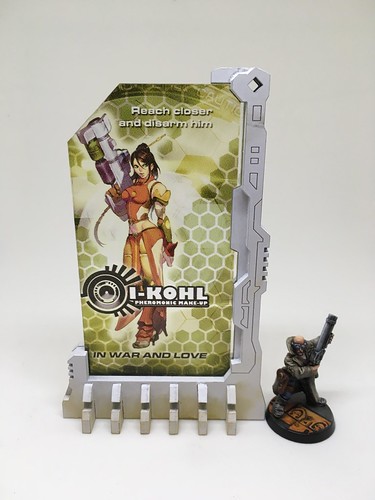 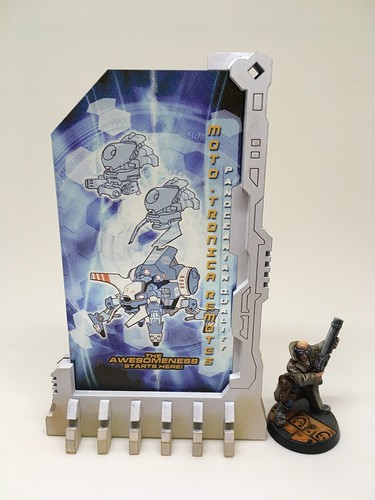 From Conscript Kevin I received a painted resin ruined building and several pieces of roadblock scatter terrain (tank traps, piles of tires). Below are some photos of the Necromunda table, in medias res. From pretty much any point on the table, a model can make a Run move and get behind cover. 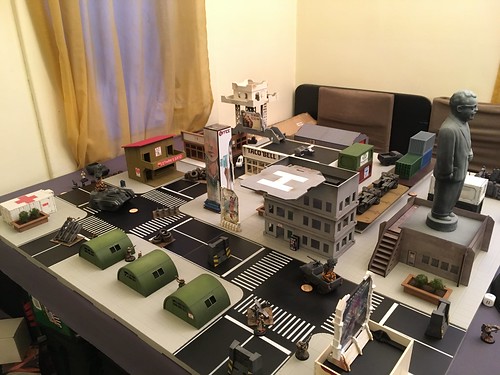 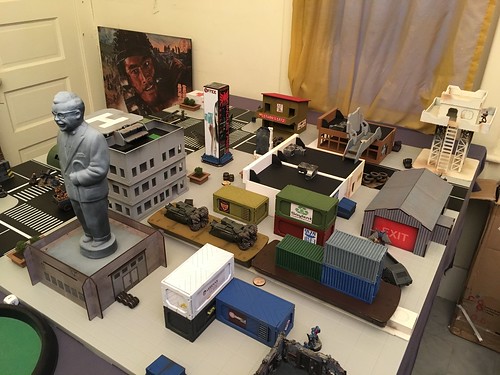 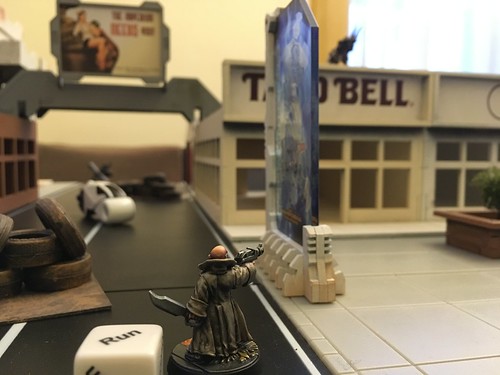 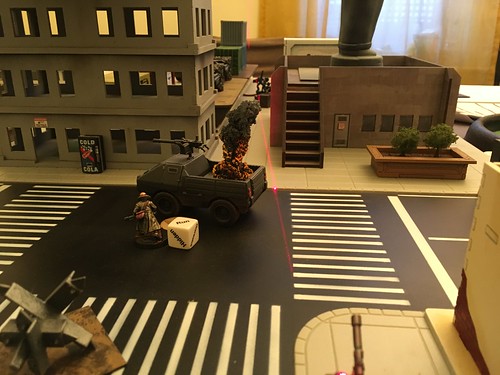 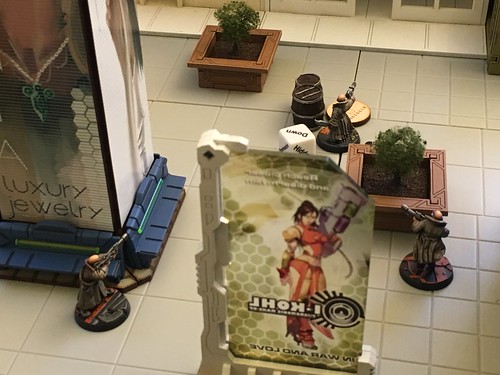 What a fine, fine looking table Dave. I know you have been working to build this up for some time, so congrats, it looks great.

I would LOVE to get that dictator statue involved in a 30k game somehow...

Looks great Dave. Looking forward to playing a game with those billboards.