This year we continued the tradition of a New Year's Day lunch and game hosted at my place. We had an excellent turnout of Conscripts and a fun game. 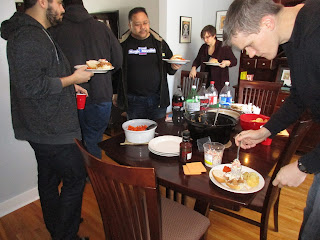 My wife Pam had prepared an amazing lunch as usual: pulled pork sandwiches, coleslaw, BBQ roasted carrots, dainties and pie. Best of all, Leanne and Robyn (wife and daughter of Mike) and Jen (wife of Dave) were able to make it for lunch as well. The tummies of all were filled with delicious food.

After lunch we repaired to the basement of Conscript HQ for a game of Otherworld Fantasy Skirmish. I'd prepared seven factions for the game was turned out to be perfect as there were seven other Conscripts in attendance. 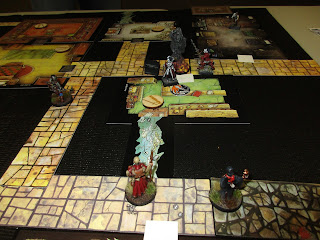 As usual, we used the superb Games Workshop dungeon tiles and markers laser-cut by Conscript Byron. In the photo above we see Greg's murder-wizard roasting Mike F.'s vampires with a Pillar of Fire spell. Outstanding! 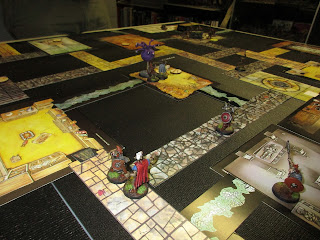 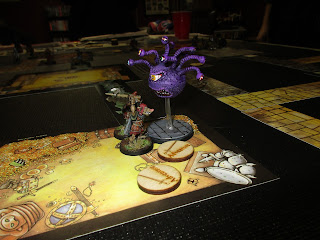 The treasure room at the centre of the dungeon held a nice surprise - an Eye Tyrant (Beholder!) that popped up to menace Dave V.'s pig-faced Orc warband. Although it was duly dispatched, I am told that its appearance did cause some consternation, which was what I was going for.

Players scored victory points for killing other players' minions (1 VP each) and characters (2VP) as well as for collecting treasure items.We counted up VPs at the end of the game and the winner (despite having to leave early) was GREG B. with 10VPs. Indo came a close second with 8VPs, while Mike, Dave and Keegan tied on 4VPs. Frederick scored 3 and Kevin scored... zero. Must've been the warband I reckon ;-)

Anyway, thanks as always to Pam for the wonderful food and to the guys for coming out to ring in the New Year!

Thanks for a great event Dallas - the food was amazing, and torching Mike's poor vampires was a lot of fun too :)