Fourth Challenge Submission - Whirlwind Scorpius for the Sons of Horus 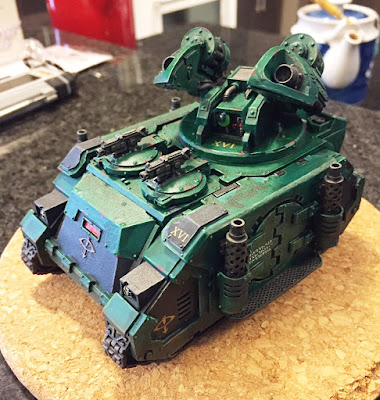 More 30k stuff in the Analogue Hobbies Painting Challenge. This is a Whirlwind Scorpius, a multiple rocket launcher support vehicle for the troops of the 16th Legion, the Warmasters' own Sons of Horus. While I am trying to expand my collection into some other Legions, I still have a bias toward the 16th Legion, and somehow the Sons of Horus seem to have first claim on new model purchases...it's what Horus would do, after all, right?

This model has been sitting around since just after our great big 30k mega game in October of 2015 - nice to finally get it done!


I generally dislike long range artillery vehicles being represented on the table for a skirmish game, particularly in 28mm, but the Whirlwind is one of those iconic 30k/40k vehicles for fans like me that are fun to have in the collection.  Games Workshop has made many versions of this model over the history of the game, but they all generally do the same thing - drop explosive rockets on the heads of opponents!  Let any who oppose the Hope and Change of the Warmaster flee in terror...


This particular model is from Forge World, a mixed resin and plastic model kit.  I really like the look and design, as the Forge World guys have designed a sharp looking launcher while combining many throw-back features which are shout-outs to the original plastic model.   That nostalgia stuff gets me every time!

The Sons of Horus will look forward to an opportunity to use this new toy to wipe the galaxy clean of fools who cling to belief in the so-called "Emperor".  This one vehicle got me another 15 points towards my goal of 1,000.  More 30k stuff to follow in the Challenge!
Posted by Greg B at 7:00 AM