SETTING
Date: 13 August, 1942, morning
Location: West of Malta, in the Mediterranean Sea
History: Operation Pedestal started on 9 August 1942, when a convoy of 14 merchant ships sailed through the Strait of Gibraltar, heading for Malta. On the 13th, the Regia Aeronautica sent Tenente Adriano Visconti and a wingman on an armed photo recce patrol, each flying an MC.202 Folgore ("Thunderbolt").

Last Thursday Bill, Kevin, and Brian came over to play the Check Your 6! scenario "Thunderbolts over the Med" - the second scenario I've written set during Operation Pedestal, Aug. 9-15, 1942.

As the scenario started, the Italian pilots have just made visual contact with the merchant ships when they are "bounced" by four RAF Spitfires escorting the convoy.

Below are the 1/144 scale model Italian fighter aircraft run by Bill and myself - Bill graciously allowed me to play the lead ship. The Folgore in tan and green camo represented the aircraft flown by the flight leader, Adriano Visconti. Bill ran the wing man, in the green plane. The Regia Aeronautica Italia started by the northern table edge, the RAF from the south. 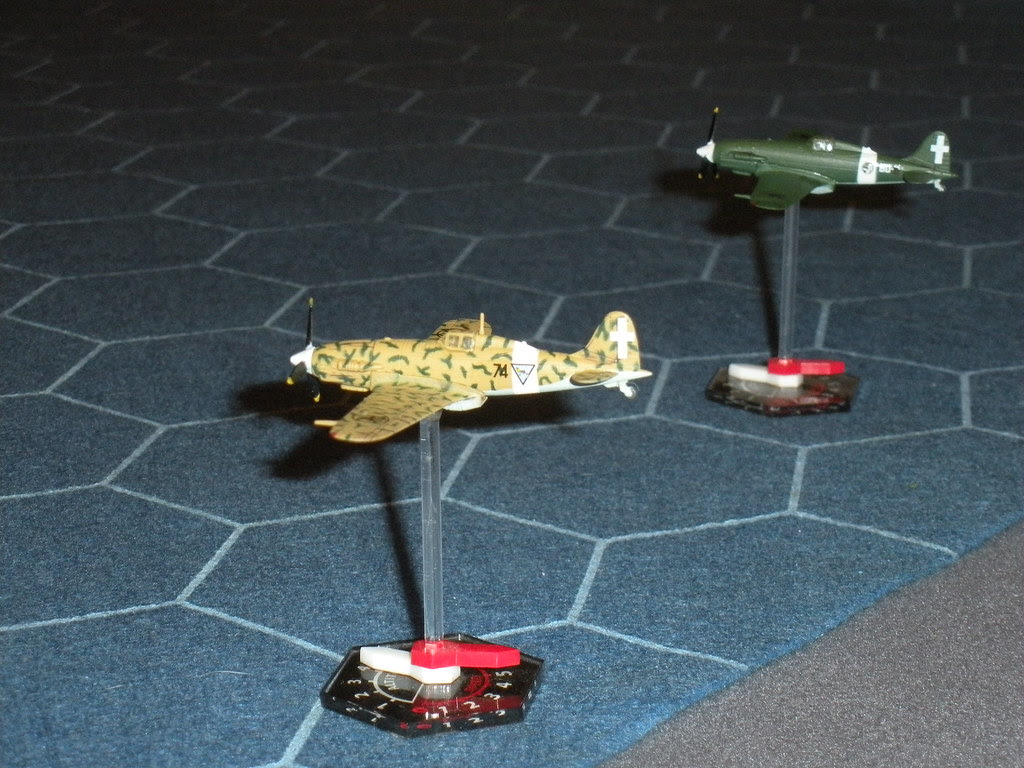 The Malta-based Spitfires started at a higher altitude than the Italian planes. The latter, due to the rules of the scenario, had to plot their first move as forward, level flight. Below, Ken and Brian can be seen plotting their first moves. The RAF hoped to capitalize on their altitude advantage and the element of surpise. 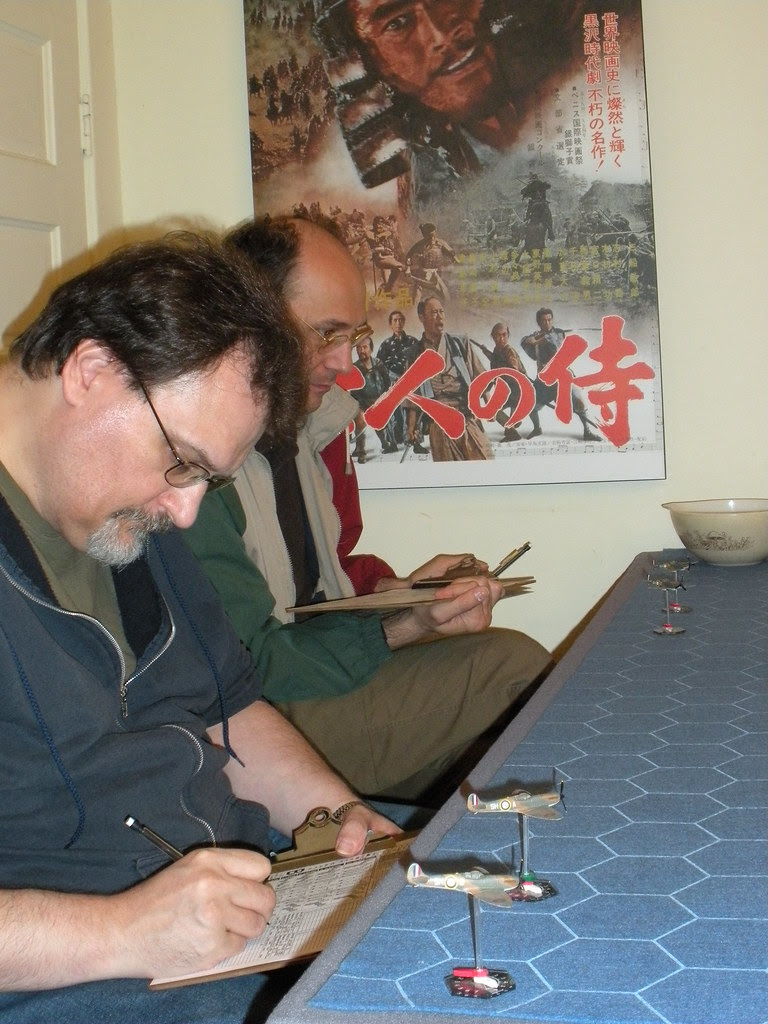 The Regia Aeronautica planes moved in a southeast direction to engage the easternmost pair of aircraft first, hoping to whittle down the RAF's 2-1 advantage in numbers. 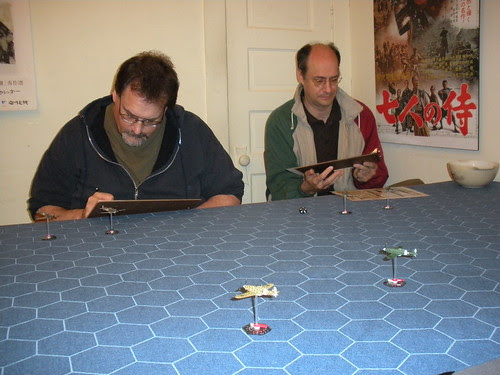 The Italians traded speed for altitude, climbing to meet the RAF fighters. In the ensuing exchange of gunfire, Bill's green Folgore inflicted airframe damage upon one of Kevin's Spitfires. 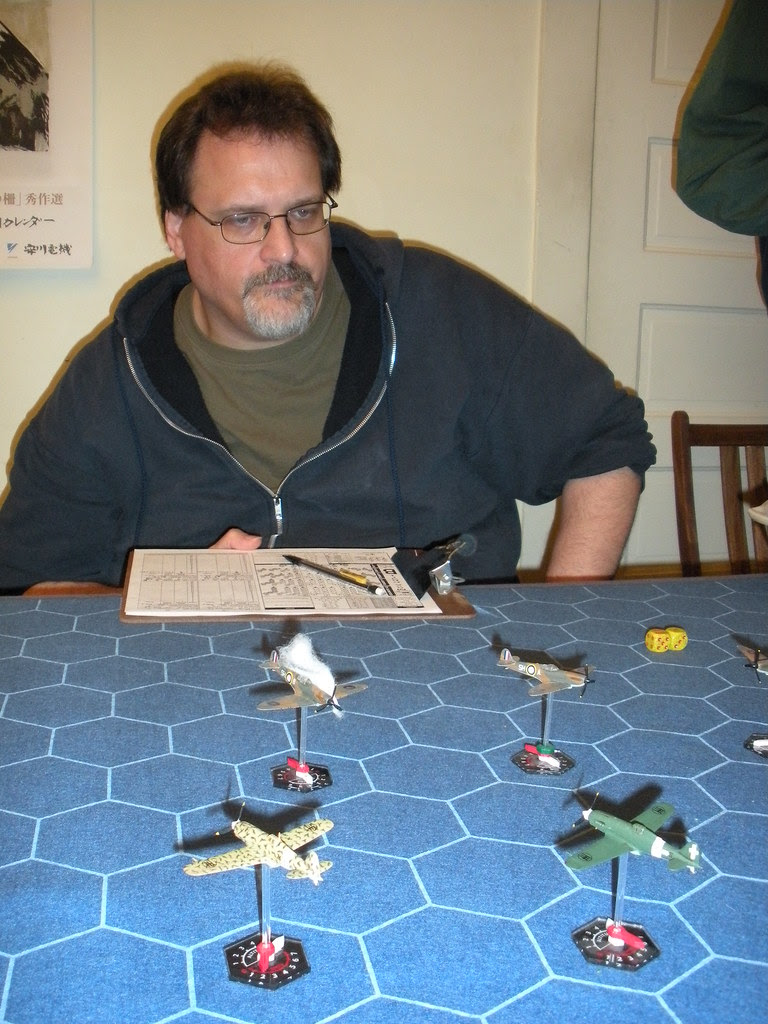 Things started to get interesting as the furball escalated. Bill's plane stayed high and banked west. The damaged Spitfire gently turned east. The other planes spiralled down to mix it up. The Italian ace and one of Brian's planes narrowly avoided a collision as they passed each other in the same hex, at the same altitude. 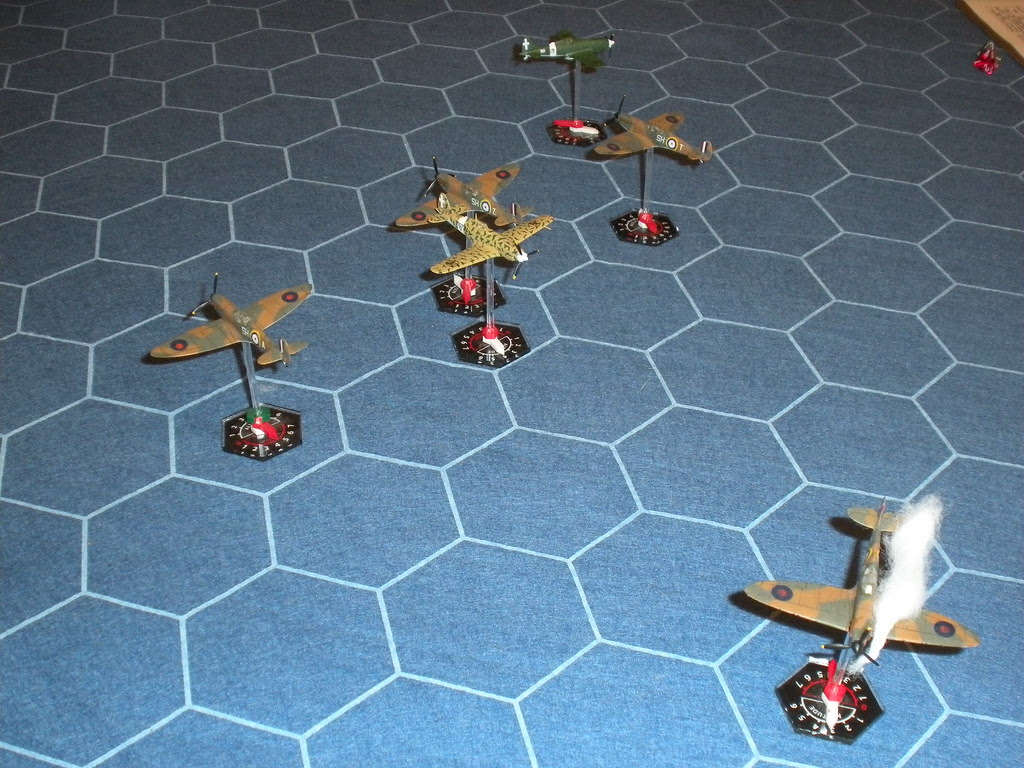 The ace squeezed off some shots, hitting the damaged Spitfire, but the Folgore's light armament failed to inflict any damage.

Kevin sensed an opportunity to put fire on the Italian ace. He pulled his plane around in a much tighter turn, but the Spitfire's damaged airframe couldn't stand the strain and the plane crashed into the sea. 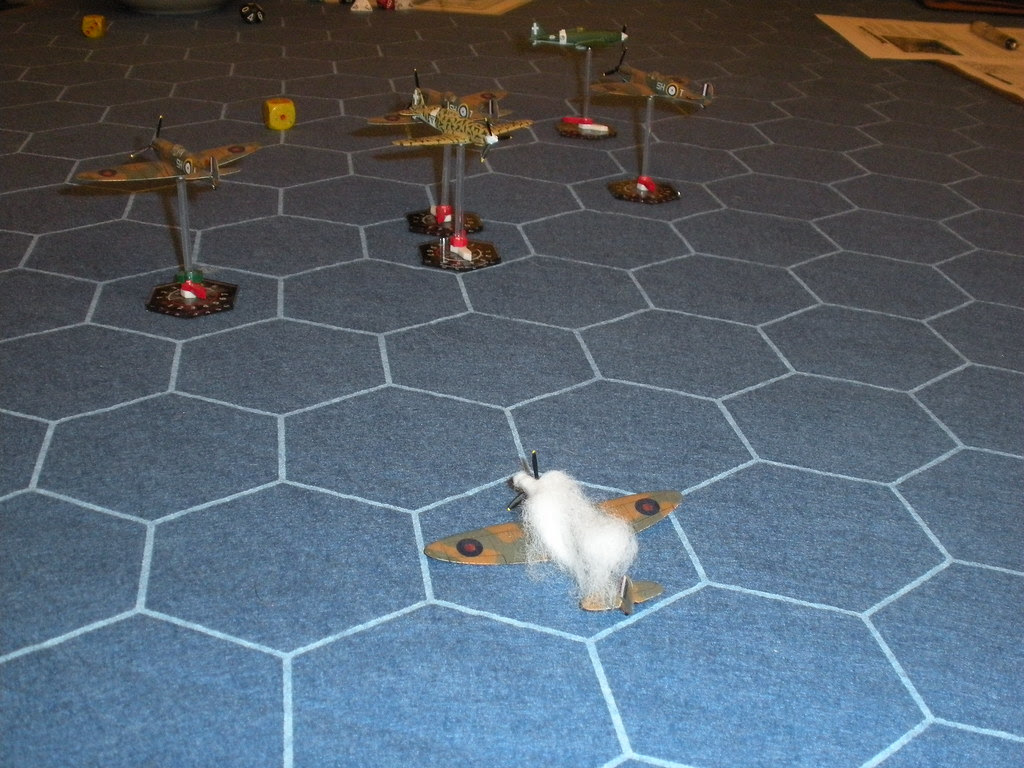 As the dogfight continued, one of Brian's planes managed to get on the "six" of Bill's MC.202, damaging its engine. In the photo below, Bill can be seen contemplating the CY6! quick reference card. 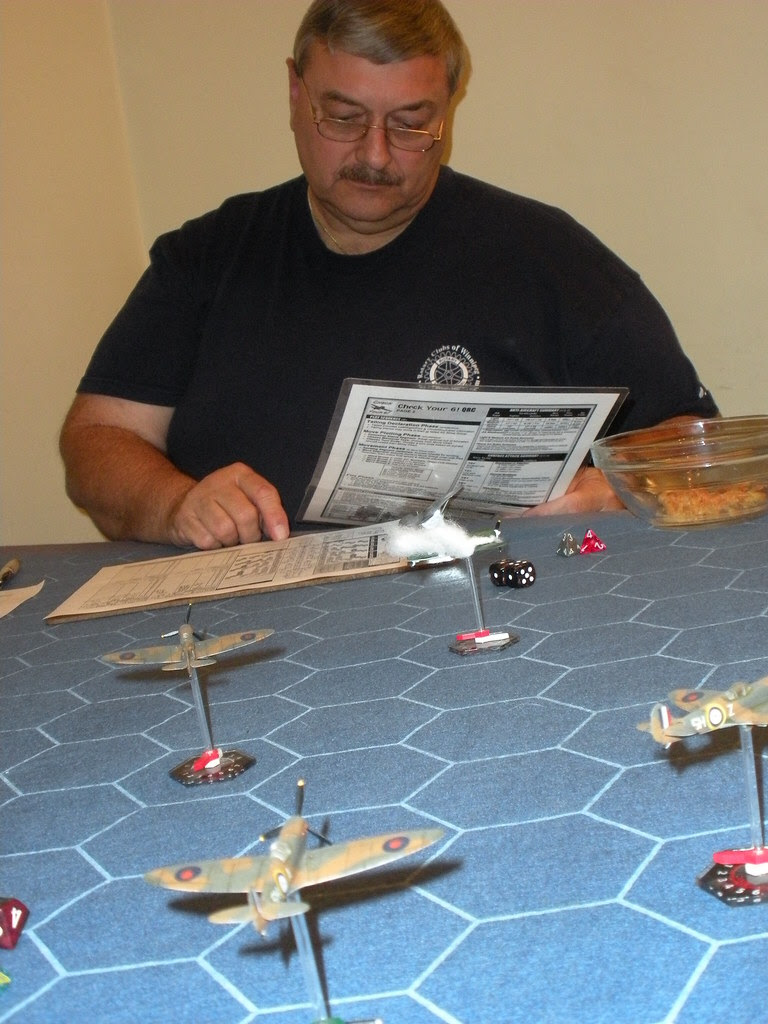 Brian's second Spitfire managed to stay on Bill's tail. This Spitfire, due to the scenario's variable rules, had an all-machine gun armament. This came in handy later. Brian rolled to hit for that plane such that it would have run out of cannon ammo but, not having any cannons, its offensive capability remained undiminished.

In the photo below, Spitfires run by Kevin and Brian avoid another collision as their pilots concentrated on their Italian targets. Brian's Spitfire got in a close range burst that sent Bill's Folgore falling into the Mediterranean. The ace's Folgore maneuvered away from the Spitfires which, factoring in deflection, prevented a hit from Kevin's cannons. 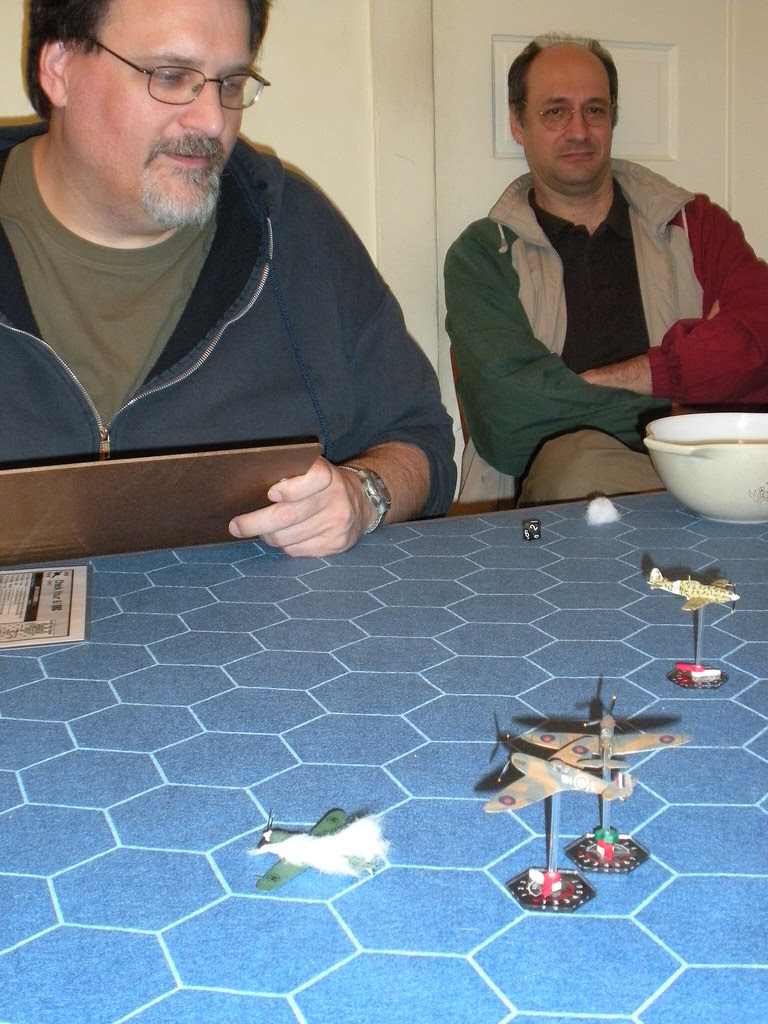 The remaining Italian plane banked right and dove, picking up a lot of speed. A quick burst put an airframe hit on Kevin's remaining Spitfire. 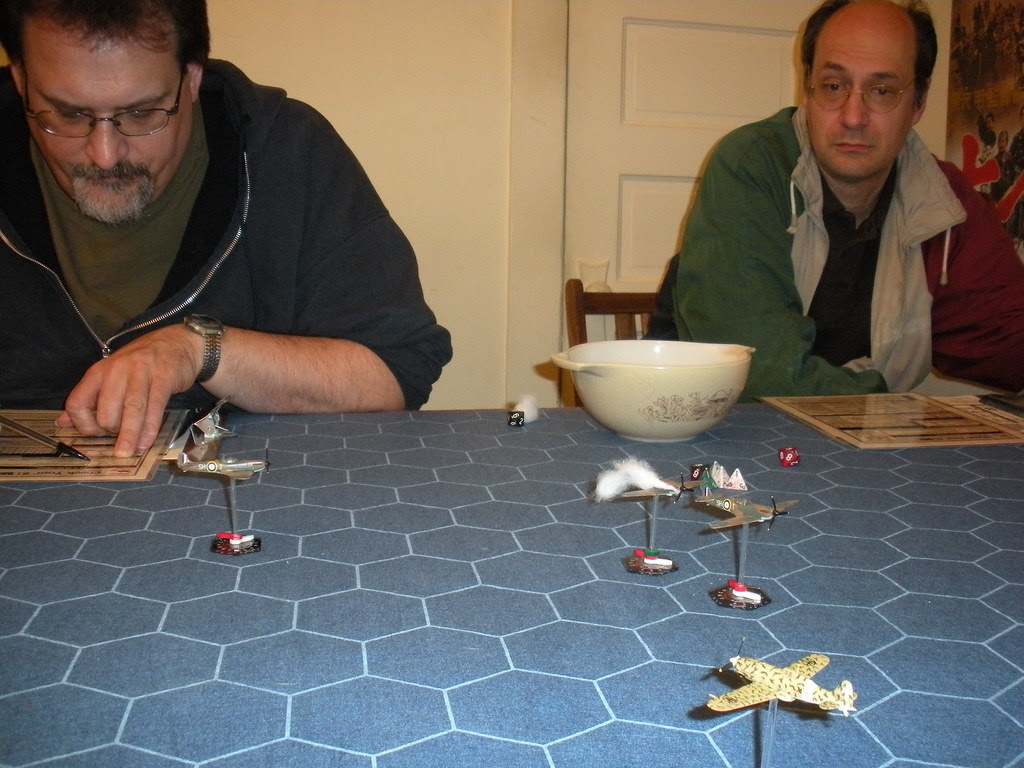 Seeing an opportunity to get some revenge for his wingman, the Italian ace pushed his throttle wide open and dived at Brian's all-MG Spitfire. In a head-on exchange of gunfire at point-blank range, Brian damaged the airframe of the ace's plane. The Italian's machine guns also struck true, luckily shooting down the Spitfire in a long burst. 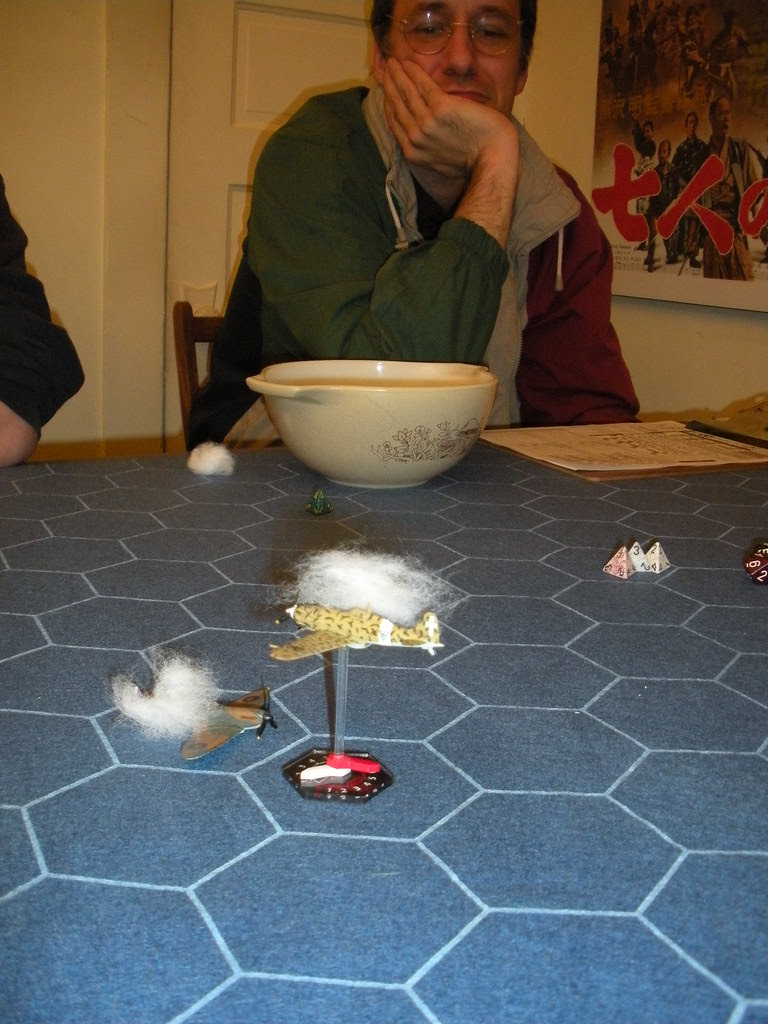 With his plane damaged, the Italian ace decided that honour had been served and so dived out of the fight. The remaining Spitfires were unable to prevent the Folgore from escaping.

With one plane damaged and one plane lost, the Regia Aeronautica manged to squeeze out a win, since the RAF lost two planes and had had a further Spitfire damaged.

[Historically, one Spitfire and its pilot was lost in the engagement.]