Just when you think your minis are safe...

I love the gaming hobby, and have amassed quite a horde of painted stuff over the years. I display as much as I can - trying to find a spot that is nice, safe, logical, and within domestic-approval zoning. I figured the second story of our little house was safe enough...so imagine how great it felt to come home after a week long vacation to find this upstairs: 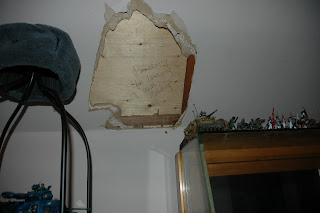 Some back story - our house is 80+ years old, and following ice-damming issues and rain-leaking-into-the-house issues, we opted for a brand new roof. New shingles. New insulation. New decking. New everything, right down to the studs. While I was away, I received a cryptic call from the roofing supervisor that a guy had "slipped, damaging the ceiling, but nothing inside".

Well, it could have been a lot worse, but the tally for this little slip (all painted stuff) is one 40k Stormblade damaged (bizarrely, one of the side turrets is missing - I think they knocked it off, and sucked it up in the clean up), four 40k Chimeras damaged, three 40k Leman Russ tanks damaged, and two Gün Scwharm tanks damaged.

The damage was primarily chips in the paint, and then little frizzy bits of spray insulation which came through the hole and stuck to the models. And the missing turret on the Stormblade...at least they did not totally destroy any stuff. Still, that little note on the inside decking did not really make me feel better.

Email ThisBlogThis!Share to TwitterShare to FacebookShare to Pinterest
Labels: 1 to 1 scale mishaps

I just about pulled my hair out when I saw that. The note should have gone more like this: "I'm sorry I wasn't paying more attention and wrecked your sh*t!"
I would have gone nuclear on them.

p.s. The side turret was most certainly sucked up by a vacuum. I'm sure the guys were relieved to discover that only some toys were damaged.

I think I can replace the turret with one from the plastic baneblade kit - but who builds a baneblade and does not use one of the turrets??? F***!

FRICK! I'd be writing "sorry I collapsed your nutsack" on his balls after I kicked them in.