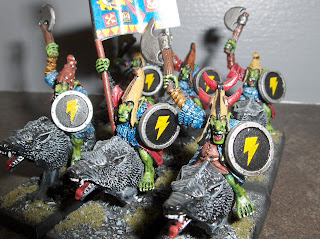 Tower of Zharr Naggrund, The Dark Lands - The Hobgoblin contingent of Slave Captain Lord Bzaark the Mean won an overwhelming victory over far superior numbers of Imperial troops, Lieutenant Gnashrak of the Hobgoblin contingent's Wolfrider regiment reported yesterday.
"We met a su-per-i-or force of mounted Pistoliers and put the hurt on them big-time. We really wrecked they shit. I mean it wasn't even close," Gnashrak said.
"After we bum-rushed those clowns we pursued them until not one Pistolier was left alive," he continued. "Hell, we rolled up on a Great Cannon and scared those dudes so bad they blew they own shit up! I talked to my brother Kashnak, he a gunner in the bolt-thrower battery, and he said they totally dominated the knights they was shooting at, too."
"Word," reported Kashnak when contacted for comment. "We aced those d-bags, two regiments worth of heavy knights. When you come for the bolt-throwers, come heavy, or don't come at all, know I'm sayin'?"
The Hobgoblin contingent was part of the raiding force commanded by Slave Captain Lord Bzaark that had left the Tower of Zharr Naggrund three months earlier on an extended slave-taking mission.
Neither Bzaark himself, his second-in-command, Lieutenant Mazalam of the 43rd Bull Centaur Regiment, nor any other Chaos Dwarf troops of his raiding party were available for comment at press time.
Posted by Dallas at 1:38 AM