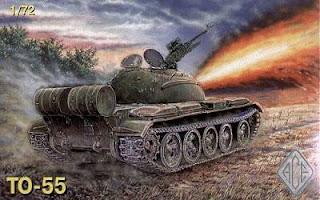 In this artist's rendition of last night's game, some Bundeswehr infantry are dealt with by a Soviet flame-throwing tank.

The Conscripts assembled once again last night, this time to enjoy some 28mm WW3 gaming. The battle was set outside Marburg, West Germany, and pitted the West German Bundeswehr against Soviet Motor rifles with a twist - the Soviet Force was in fact a group of assault engineers. Mike, Dallas and Brian rolled with NATO, while Cam and Bill joined me on the Soviet side.

The game was set on a 6'x4' table, with the traditional three objectives. Two of the objectives were defensive positions rigned with sandbags, and the third was a bunker, a little further behind the line toward the BW table edge. The BW started in control of the table, but the Soviets would assault and after 10 turns the winner would be the side who contolled the most objectives.

The line of sandbagged defensive positions (including the two objectives) and roadblocks was set along the middle of the table, and the BW dug in with a squad of troops, two Panzerfaust III teams, a MILAN team, and a team equipped with a totally awesome automatic 40mm grenade launcher. For reinforcements the West Germans could count on two Panzer Grenadier squads in Marder IIs, a Leopard II, and two passes from a Tornado ground attack plane. What could possibly overcome this sort of force, dug into defensive positions no less?

The answer: Gas and BBQ.

First off, the Soviets hit the German position with a non-lethal gas attack. The majority of the on-table BW troops at the start of the game had no NBC gear and therefore would have penalties to do almost anything during the game.

Then there was the Soviet force itself - comprised of a reinforced assault engineer unit from a motor rifle regiement - 3 8-man squads in BMP-2s (with AT-5 ATGW missiles) and a 5-man command group in a BMP-1, supported with a ZSU-23-4 AAA vehicle to keep that pesky Tornado away, a Spandrel ATGW vehicle to try and deal with vehicles, and most devestating of all, a platoon of three OT-55 flame-throwing tanks.

The game was awesome, going right down to the wire at the 10th turn for resolution.

The early turns were pretty roguh for the West Germans, and violins were played all around on the NATO side as the power of the flamethrowing tanks became clear. The NATO defensive positions were covered with horrific gouts of flame. Nearly two entire squads were broiled, and the Russian advance looked strong. The inability of the NATO anti-tank teams to hit anything made things worse. 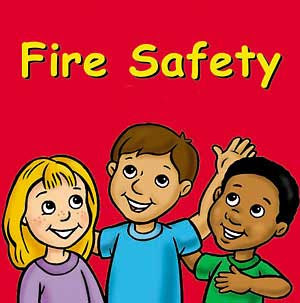 After the game, the Bundeswehr adopted this new logo.

But NATO made excellent use of air power, and despite the fact that Mike's MILAN crew seemed to be high on Lysol (they missed, and then missed, then hit, but did not damage, then missed...on and on - Mike was ready to melt the figures), vehicles started to get knocked out. Brian led the West German reinforcements, and they performed very well. The Leopard II and the Tornado made mincemeat of the OT-55s. The Tornado also pounded Soviet foot-sloggers, while Mike's 40mm grenade launcher really had a go at Bill's infantry.

In the end, Bill made key morale throws to allow the Soviets to keep one position (despite the tender affection from NATO airpower and automatic grenade launchers). The Soviet command group managed to survive in the second defensive position, although a West German squad was certainly in position to take them out. The third objective lay in secure West German control. Overall outcome, a carnage-filled draw!

As usual, I nagged Dalls to take photos, so hopefully he can add them to the blog post when he has a moment. But I have to say it was a hoot to roll out with the Chemical Commies and the ZSU-23-4 once again (after all, as Dallas noted, I really have to amortize that thing). Mike's new Bundeswehr looked awsome, and mixed well with Dallas' excellent figs. And we were fortunate to enjoy another game that went to the wire!

Thanks to all for coming out, and to Dallas for hosting.
Posted by Greg B at 11:16 AM

Remember, the reason why the MILAN guys couldn't seem to hit anything was apparently that they were using "Ove-Gloves" while swaddled in fireproof asbestos Snuggies... they both made their 5+ anti-BBQ save against the OT-55 attack...

Great report and thanks for running the game, Greg!