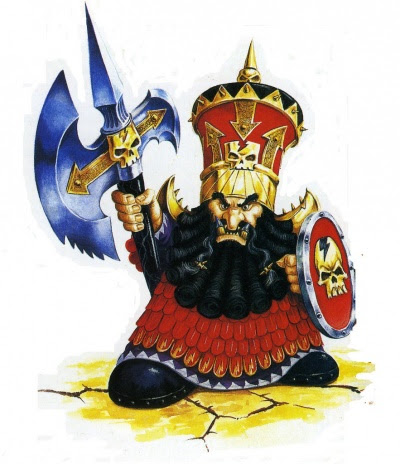 Marius Oudenaar squinted as he peered through his spyglass. "I don't see anything, Pietro... besides, nothing ever comes out of the Wastes. Ever."

"Look closer!" his companion insisted. "I'm sure I saw something!" Pietro and Marius were standing atop a sturdy stone watchtower, charged with the duty of watching the eastern frontier for interlopers. The duty was somewhat of a punishment, as the watchtower was isolated and lonely, far from the busy marketplaces and villages of the Border Princes.

"Wait a moment... I see something! I see it!" cried Marius. "Dear Gods in heaven... they're Chaos warriors! No, wait... not men... those are hats... big hats! Could it be, dwarfs? They have beards... but I never heard of dwarfs with tusks. And are those greenskins with them?"

"Slavers!" interjected Pietro. "Chaos Dwarf slavers, from out of the Dark Lands! Come with Black Orcs and Hobgoblins to take us all as slaves! Quick, light the signal fires, hurry!"

This will be something - I cannot remember the last time we played Warhammer Fantasy!

Yes it will! My newly-painted Black Orc regiment is ready to be taken apart by Pistoliers!

(Did I mention that I hate Pistoliers???)