Regulus VII lies in a system near the border of Imperial space. What passes for planetary government is being swayed by Xenos lies to rebel against the Empire. Can the Adeptus Astartes seize a foothold on the planet before Tau and Eldar reinforcements arrive?

Last Thursday we played our first Warhammer 40K Planetstrike game. This rules supplement allows playing of objective-based attacker-defender scenarios, instead of the usual "balanced" armies one might see in, say, tournament play. A good review is located here:
http://www.belloflostsouls.net/2009/07/40k-review-planetstrike.html

Mike Fraser led the attacking forces, supplementing his own new Space Marine models with some Salamander and Ultramarine troops from my shelves.

Both sides also received Strategems: battlefield spiffs, further off-table support, and other kinds of nastiness. However, the spiffs accomplished nothing for either side all game, so I shall ignore them in this report.

The Guard represented the Planetary Defense Forces. They set up the leg infantry in and around three key objectives: a bunker, a power plant, and a water treatment plant. The three walkers were placed so as to disrupt deep-striking Marines. The two tanks, the mechanized infantry and the Enginseer were held in reserve.

Mike rolled for the Attacker's pre-game orbital bombardment, rolling the max. Nine (!) Strength 9, large blast markers rained down, hammering the Guard. Despite hard cover, a third of the infantry were killed outright before the Space Marines dropped.

In this scenario the Attacker starts the game entirely in reserve. All the Space Marine infantry could choose to Deep Strike. Those units already having the Deep Strike ability (i.e., the Assault Marines) could actually charge into close combat the same turn they dropped - sweet!

Mike combat squadded the Space Marines, making 9 5-man squads that could both cover a lot of terrain and provide mutual support. The Assault Marines and the Flamer squads would drop, supported by heavy weapons and the Scouts on the ground. The Attacker started from reserve. The Imperial Guard's Officer of the Fleet called in aerospace fighters to disrupt the drop, preventing some of the Marine troops from coming down, but the Marines still managed to land the Captain and several combat squads. The following is a general view of the board looking northwest, after the Marines dropped and started shooting.

(Remember to click on the photos for larger images.) 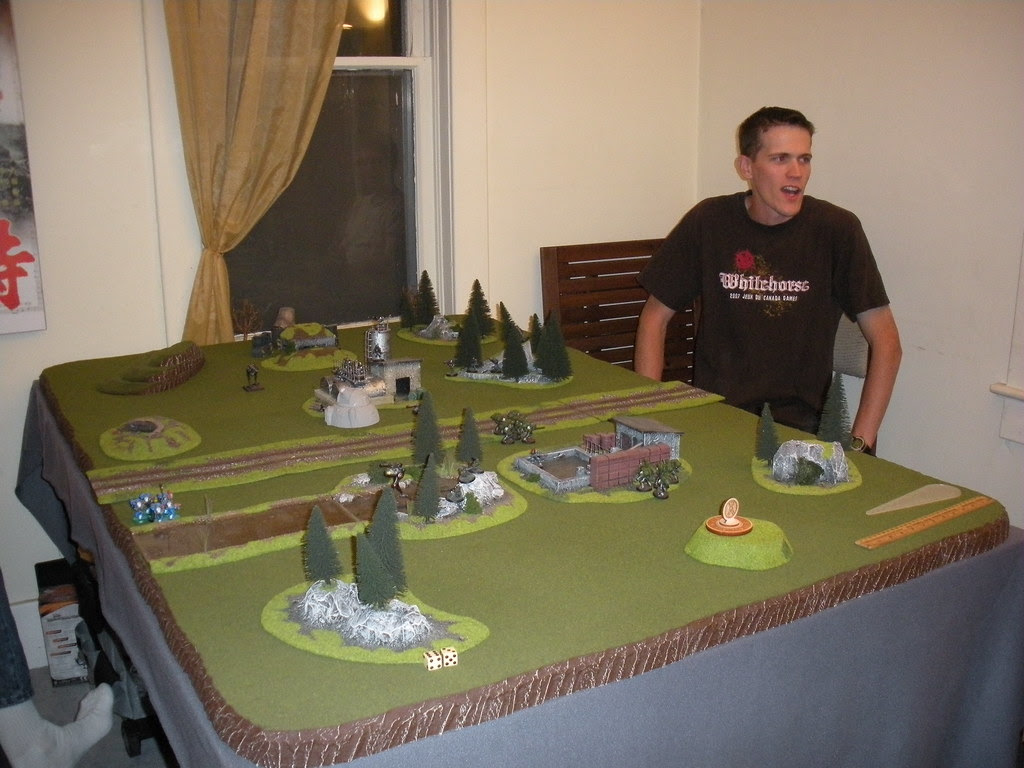 The Captain and his bodyguards tried to drop north of the power plant, but deviated off the board. Rolling on the Deep Strike Mishap Table, the Imperial Guard players were allowed to re-position them, choosing the south board edge. 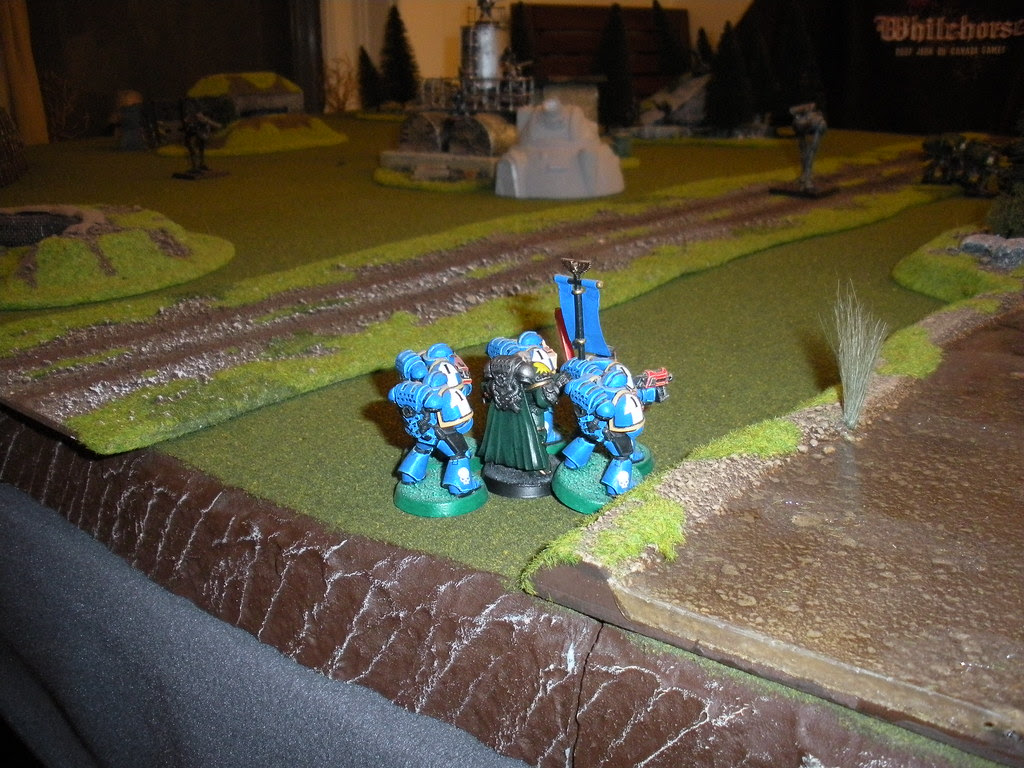 Fire from one Assault Squad reduced the Guard protecting the water treatment plant to a lone Grenade Launcher dude. As he shouted into his comm-link for reinforcements, the second Assault Squad gunned him down... 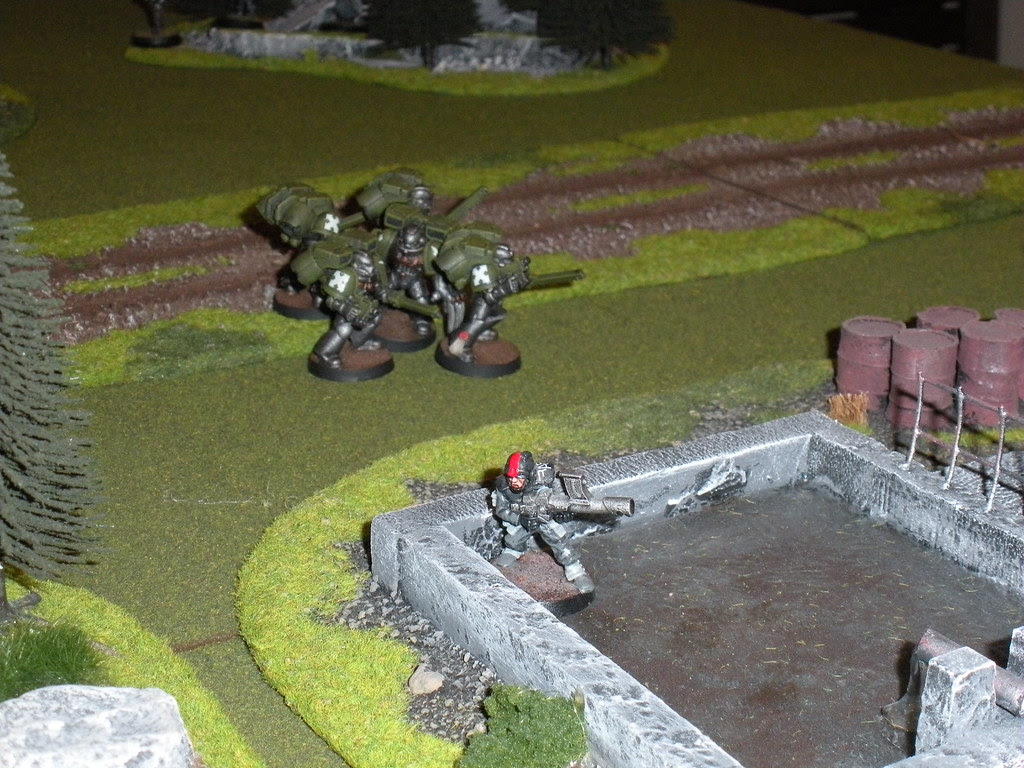 The Guard rolled well for reserves, getting both the tanks and the mechanized Veterans. Rolling randomly, the tanks came on in an ersatz platoon from the eastern board edge, but failed to land any shots on the Marines: 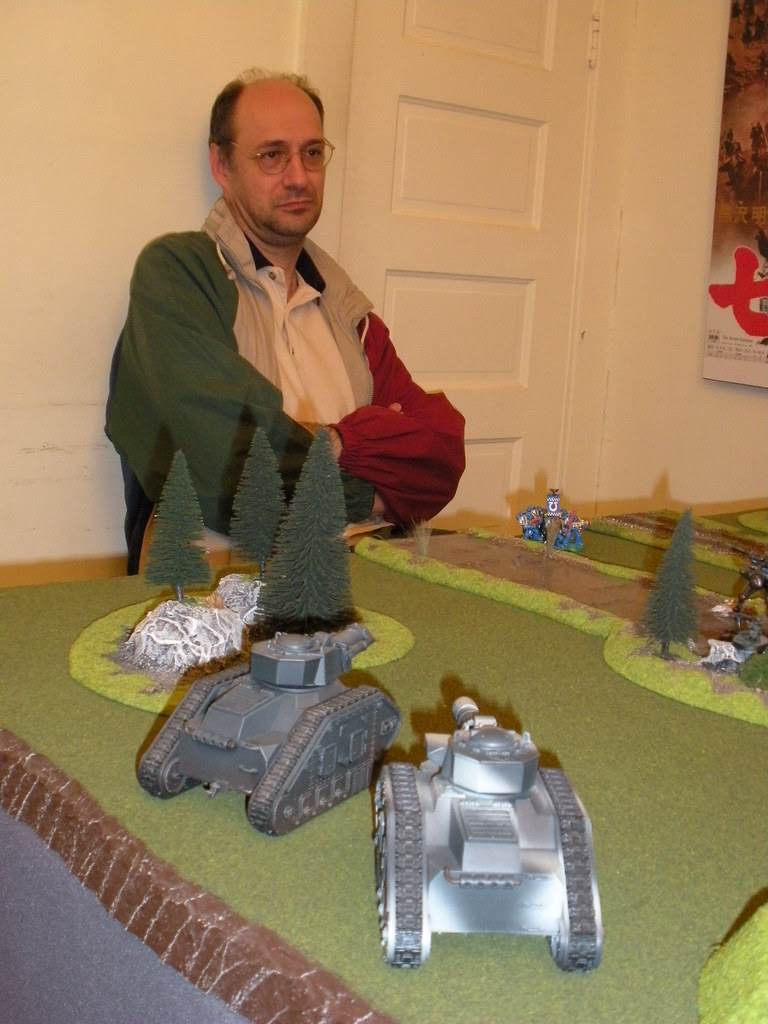 In the middle of the board, the Guard were able to tie up one combat squad of Assault Marines with a Sentinel walker. The Veterans disembarked from their APC, hoping to do better than their armoured corps bretheren. 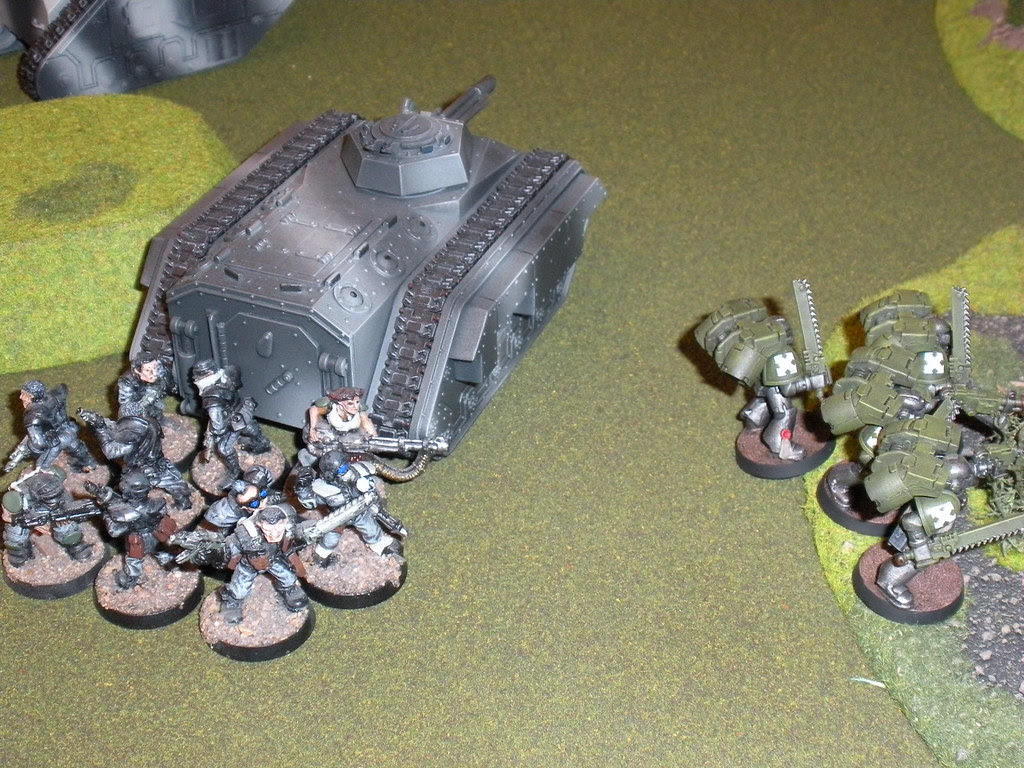 The Veterans proved their skill by cleaning out the other Assault combat squad with laser fire and flame. 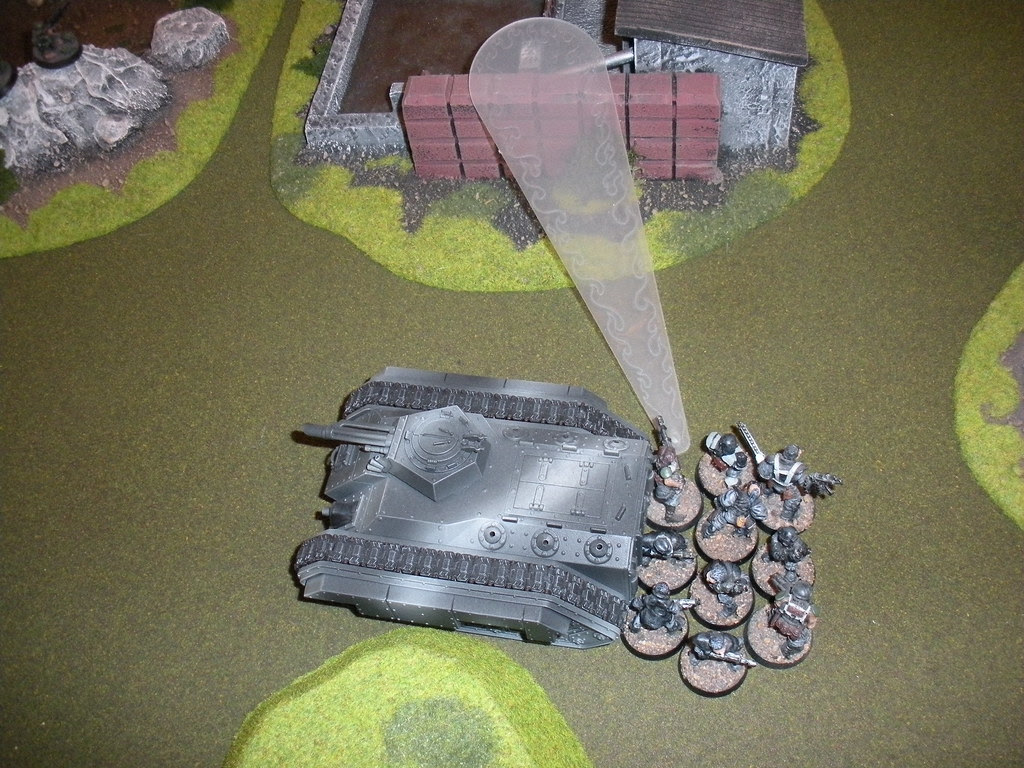 Later, a Marine Flamer combat squad dropped near the power plant. Not wanting to be subjected to that flamer, the Guard Platoon Command Squad bravely charged out of the woods, only to be cut down by the Emperor's finest. 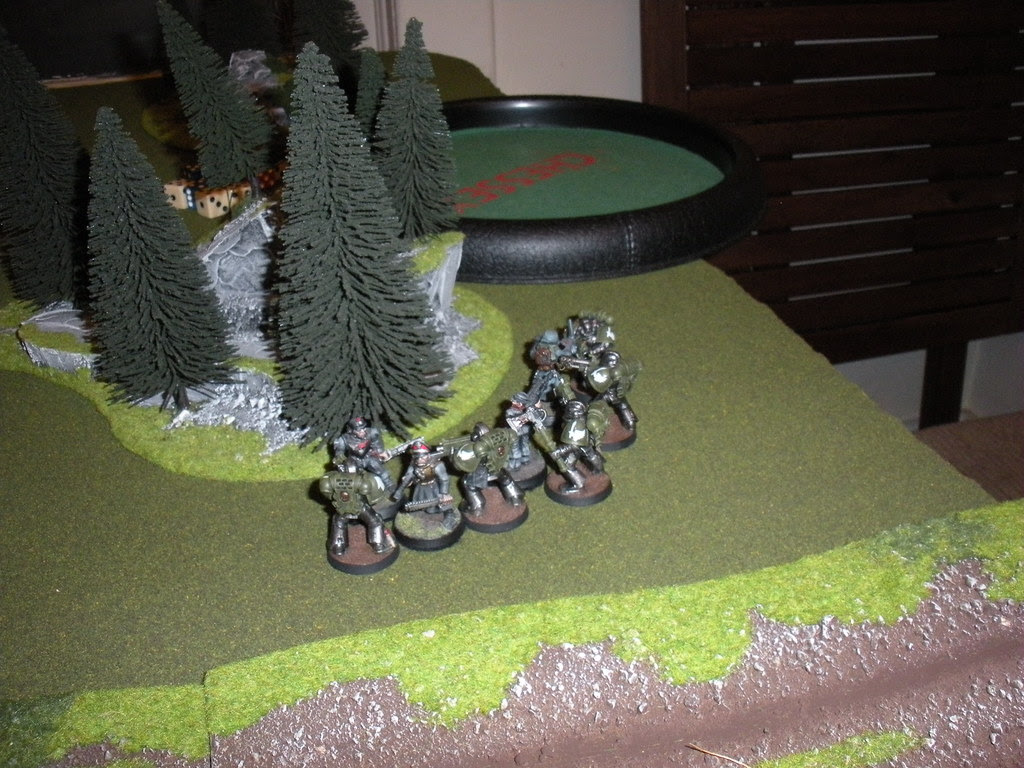 As the game progressed, the rest of the Marines showed up. Concentrated Guard fire killed off the Captain's bodyguards. A Sentinel walker tried to come to grips with him, but the Captain used his combi-weapon to reduce the walker to a pile of melted slag. 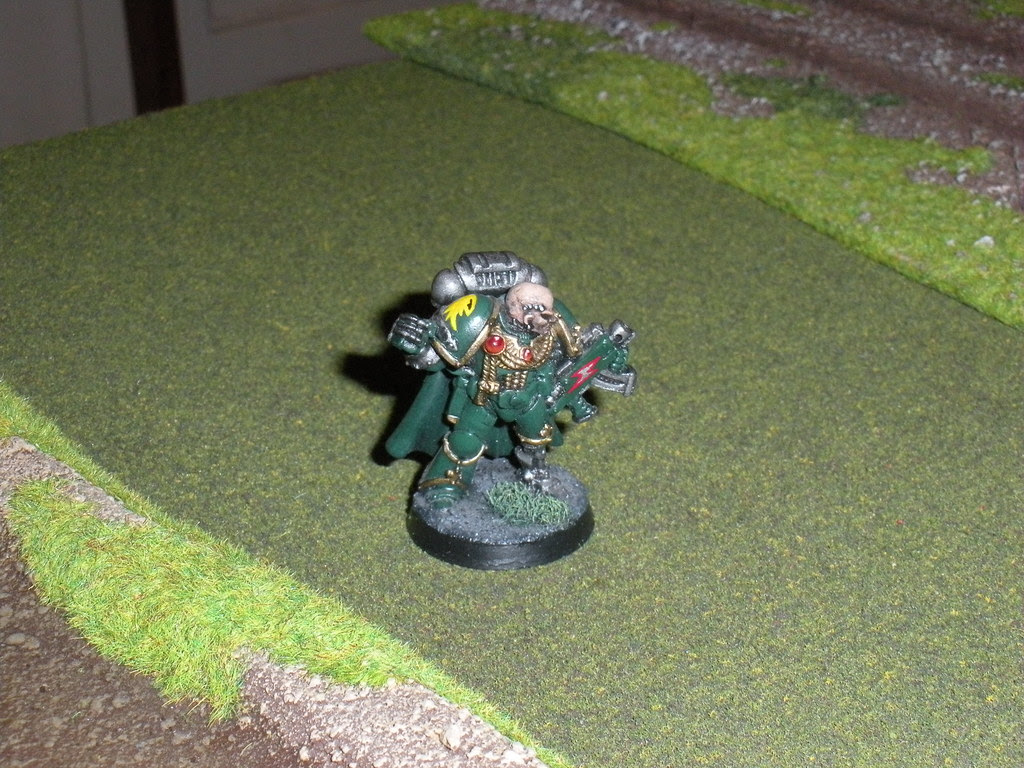 Another Marine flamer squad landed and took over the water treatment plant. The mechanized Guard Veterans mounted up and drove over to meet them. These Veterans later disembarked and shot up those Marines, too, leaving three left alive. Those Marines subsequently embroiled the Veterans in a long melee. To the southwest, the walker can be seen fighting on, successfully resisting the Assault Marines. 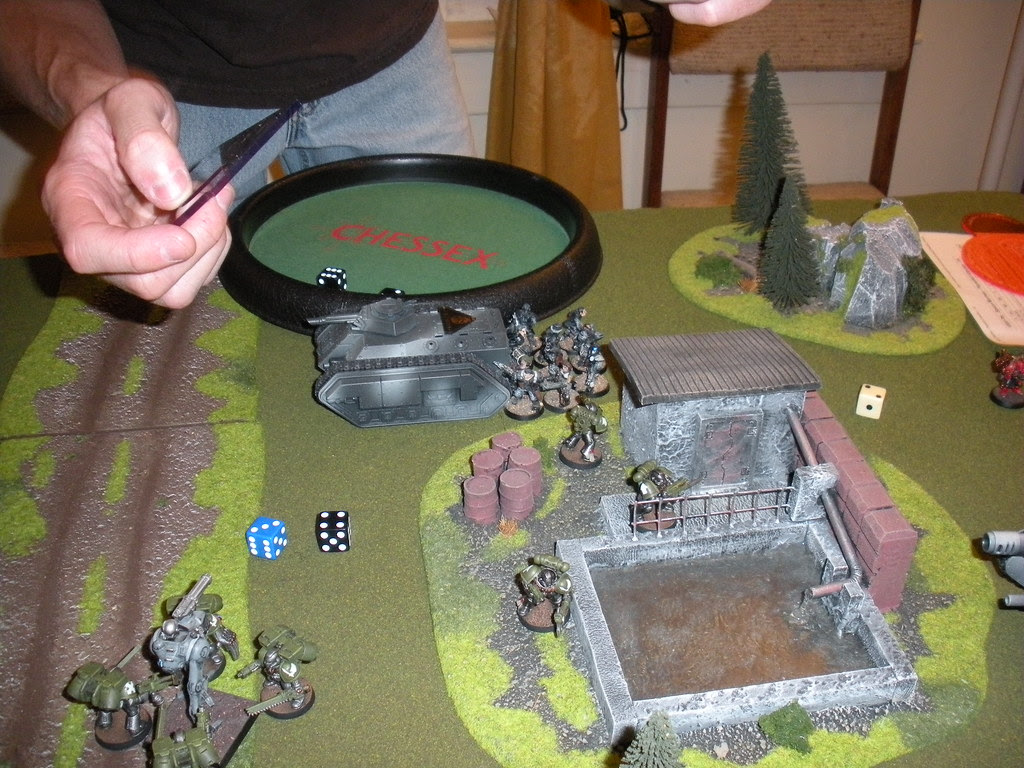 The Demolisher finally killed a few Ultramarines with its big cannon. In the photo below, to the southwest the last remaining Sentinel has just assaulted a Marine Lascannon squad in the sandbag bunker, tying them up for the rest of the game. The last two Marines of a flamer squad can be seen in the distance readying themselves to assault the power plant. 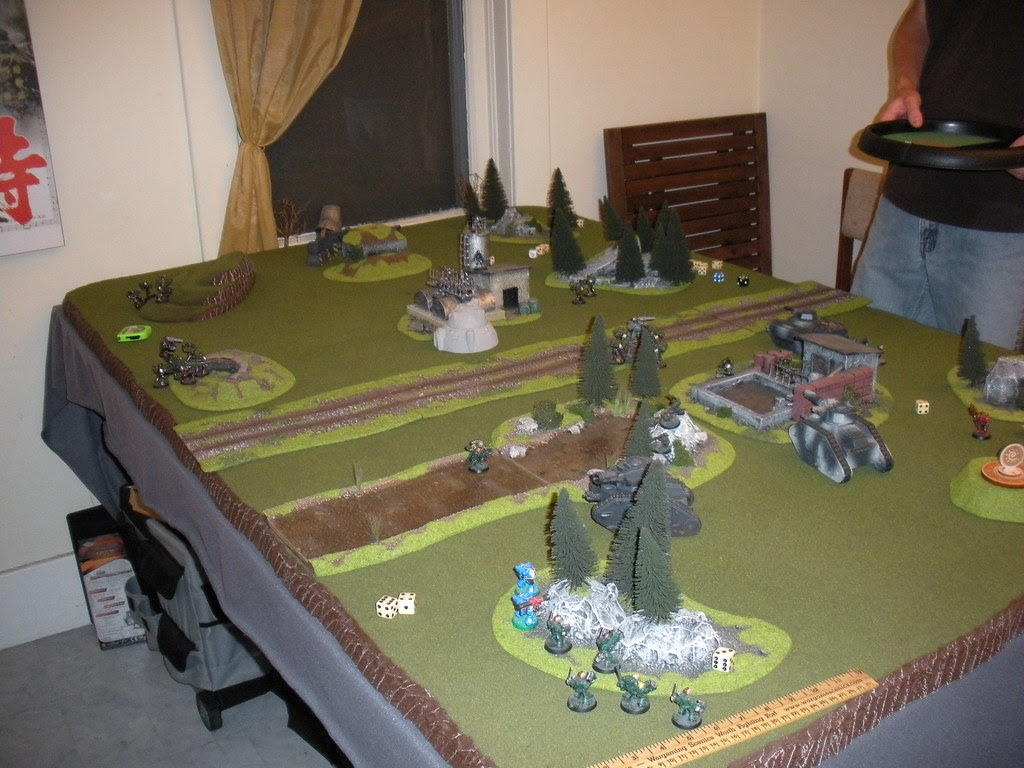 The two Marines broke the infantry squad holding the power plant. To the southeast, the Marine Scouts assaulted the Demolisher with krak grenades, wrecking the turreted cannon. The Captain assaulted the Ratling snipers, who managed to resist his charge.

Though taking terrible losses, the Veterans stayed stuck in with the Marines in the water treatment plant. The Enginseer, who had recently arrived, ran to support the beleaguered Veterans. 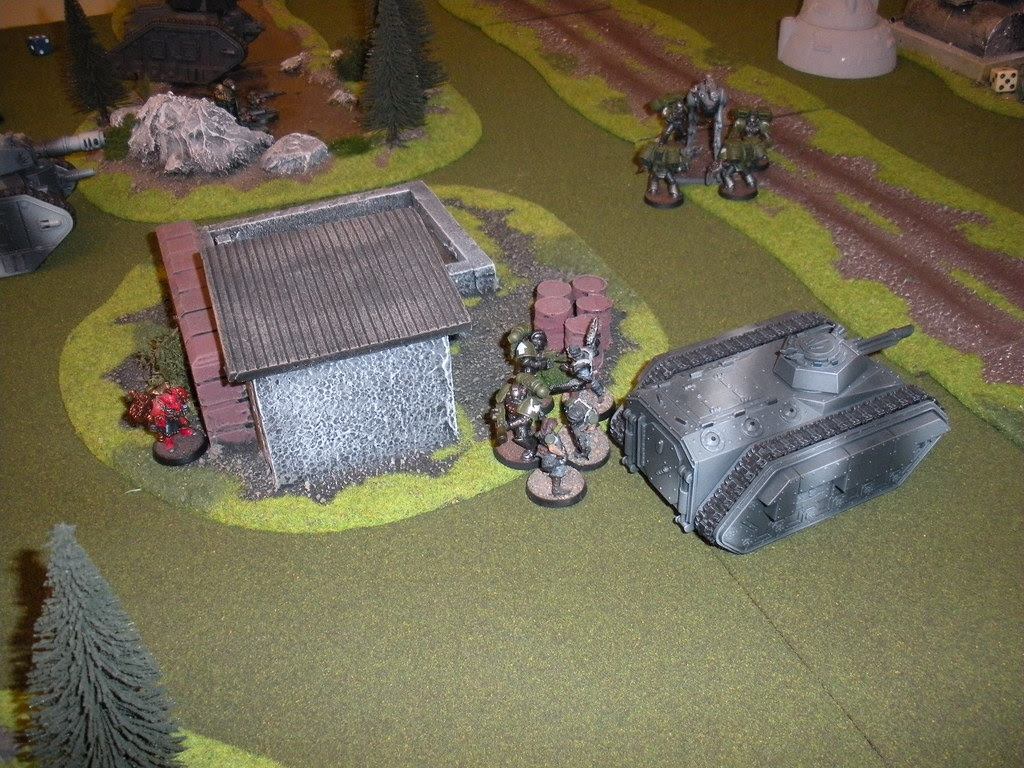 As the game wound down due to the late hour, the Imperial Guard and the Space Marines each held one objective in the clear. The water treatment plant was contested, counting as another Marine-held objective, due to the rules of the scenario.

The broken Guardsmen from the power plant were still within command radius of the Company Commander. Trying to order the broken troops to rally, needing a 9 the officer rolled an "11" on 2D6 - true to form, he had been unsuccessful in giving orders for the entire game. Fortunately for him, the planet was rebelling from the Imperium, otherwise some Commissar no doubt would come by and shoot him in the head.

In a "Hail Mary" ploy, the Demolisher tank moved into the river and fired its hull mounted Heavy Bolter at the Marines in the power plant; they both rolled a "1" for their armour saves, killing them and thus giving up the power plant. 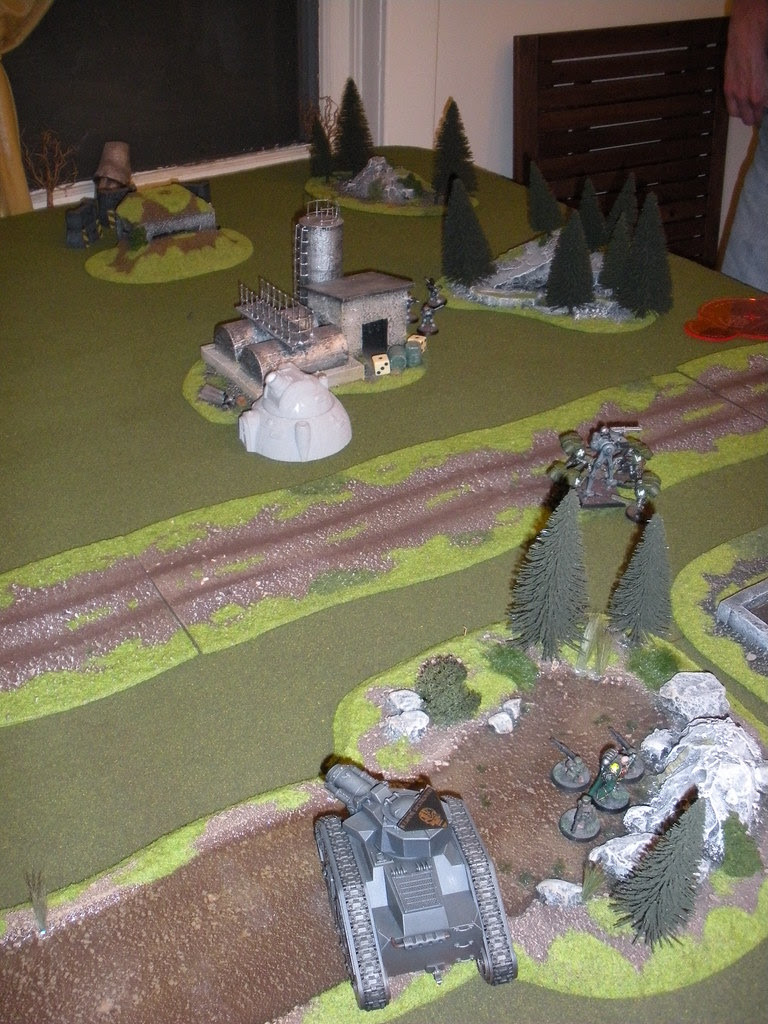 With one objective held by each side, the tie would be resolved by Kill Points. The Space Marines eked out the win, 4 KPs to 3 KPs. Missing that rally roll really hurt the Guard.

The MVP award surely goes to the Sentinel driver who tied up Assault Marines for the bulk of the battle; those jump troops might have helped consolidate either of the centrally located objectives.

ETA: The "Hard Corps" award goes to the Space Marine Captain, who survived a direct hit from a Battle Cannon round and went on to personally take out of action two Guard units.

The next scenario in the saga of Regulus VII will involve the Space Marines trying to consolidate their dearly-won foothold...
Posted by DaveV at 9:23 AM

Mike - were those silver and green marines your guys?

Those are indeed Mike's Space Marine models. He can give more info regarding background and theme of his paint scheme.