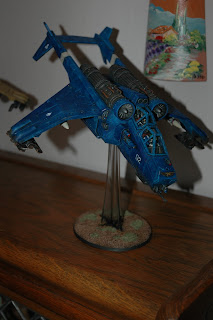 A couple of weeks ago, we concluded an Epic 40k game set on the hapless Imperial world of Toxo IV with a draw between the Tau and the Imperial Guard. A final show down had been brewin in that last disputed sludge sector, between the Tau and the Storm Troopers and Sentinels. I figure this will call for a part II, but with the game in 40k. Since I have a bunch of red Tau in 40k, and blue storm troopers in 40k, I just needed to add a few models to round out the "feel" - Valkyries!

Most of the guys have seen this finished model anyway, as I was showing it off at the 6mm WW3 game two weeks ago, but here are a couple of pics. This vehicle has more of a vehicle-hunting mission, equipped with a lascannon and two hellstrike missiles. In theory, the commandos should be killing the people/aliens (right...) 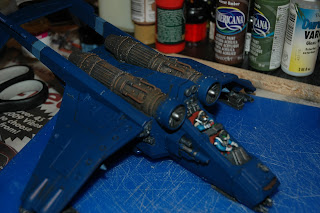 My first pass with this model was very frustrating. But the second time around went way, way smoother. I figured out the thing to do was to pretty much ignore the instructions, and instead follow the excellent GW online tutorial, which provides a sane way to assemble the model. One thing I clued to this time around is that many photos on the box are not, in fact, the assembled plastic model, but photos of the finished resin models from Forgeworld, which have many subtle differences.

Also, I was reminded again of why I love that blue paint scheme - it is insanely fast. Painting the cockpit takes the most time. The photo above is the model at the half-way stage - took about an hour! 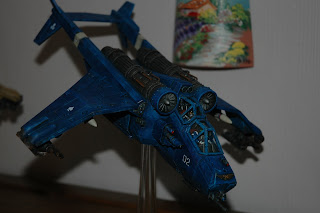 So, one down - three to go, plus a Vulture for fun! I have ordered the additional Vaklyries from Maelstrom games, saving some big $$, and I still have that Vulture from Forgeworld (which is really, really hideous to assemble - stay tuned for seperate posts on that desperate project - I have had to break out the green stuff, and I SUCK with the green stuff).

While the remaining Valkyries should go smoothly, I think I may attempt one model with the door gunners open...that will be tricky! Not sure how I will pull that off. One problem at a time.

The overall force will transport my blue storm trooper lads - three squads, each with one Vaklyrie, and a fourth to carry the command flunkies, with one Vulture to assist. A bunch of sentinels will help (let's say they got air-dropped or something). I don't think it is codex-legal or whatever, but who cares? I just hope it will look cool...and when the time comes, we'll have a mega-smackdown in that final sector of Toxo IV!
Posted by Greg B at 8:43 AM

I think it's legal in Planetstrike (which is pretty cool).

Hey - good angle! I think it might work for Apocalypse too, but I don't know either mod all that well.