Followers of the Blog will have seen the discussion between myself and fellow Conscript Dave V regarding the most recent Imperial Guard Codex. I posted a rather harsh review, but I did concede the fan boy is still in me somewhere. Dave, in turn, posted some ideas on a solid new 1500 point army list using the new Codex, with a kind of Bundeswehr theme to them. The progress has been slow by my usual standards, but some finished stuff is finally starting to crank out of the machine. Here are a few pictures. 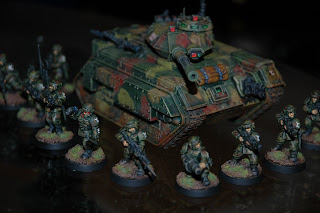 I tried to go for a "flecktarn", modern camouflage look, similar to what Dallas and Mike F have achieved with their Bundeswehr figures. Not sure I got there, but at least they look camouflaged. The eagles, skulls etc. which I would have always picked out on my previous guard projects have been muted almost into the camouflage - I wanted them to look as much like troopers as possible.

For the APC, there was a good discussion on the blog about trying to use a different vehicle, even a Razorback based on the latest acquisition by the German army, but in the end I stuck with the Chimera chassis, and opted to use a modified Predator turret on the vehicle. 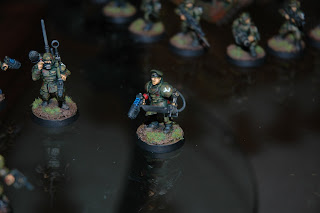 For a symbol on the shoulder, I turned away from the plastic Cadian decal sheet and pulled out my DAK decals from Battlefront, selecting one of the Panzer division symbols to serve as a handy shoulder plate marking. 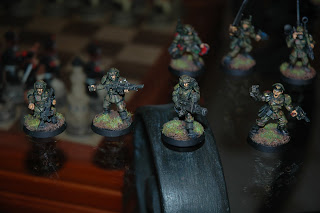 So far I have finished one squad (10 guys), one vehicle and a smattering of the command guys I will need (medic, vox-caster, a few different officers).

Up next will be more "regular" troops, and I am trying to figure out what to do to make the veterans looks a little different/elite. I hope I can remember what I did to the Predator turret (I kept many elements of the Autocannon, but the main barrel of the multi-laser) when the time comes to assemble the next vehicles!
Posted by Greg B at 11:04 PM

Greg, those look really cool. I like the camo a lot.

Will these guys be getting the Demolishers and Hellhound?

Yes - a Demolisher and a Hellhound, powered by 100% pure high-grade Toxo Brand Toxi Sludge TM from the loyal Imperial Citizens of Toxo IV.