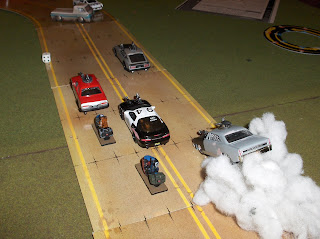 In Thursday's game, the Kansas City Vintage Sports Car Club and Beer Drinking Society (represented by Mike F., Bill, and Greg with assistance from me as the Dodge van driver) were bounced by the Department of Just-Us outlaw gang (Perry and Brian, with Dave V. and Wes as Bikers Mouldy and Skuller, respectively).
I set up the cars per one of the DF book scenarios, the KC boys started at 60mph and the Outlaws at 80. I won't go through a turn-by-turn replay but suffice to say that despite havoc wreaked by Perry with the 40mm grenade launcher, and Wes's coining of the memorable catchphrase "the Skuller loves it!!" the Outlaws were owned by turret-mounted love from the KC crew: 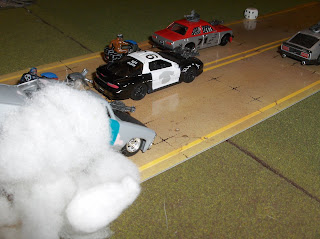 "KABOOM!" Betcha didn't know there was a hydraulic ram under your car, Brian... 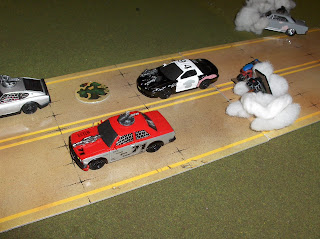 "The Skuller loves it!!" (that's him flying through the air) 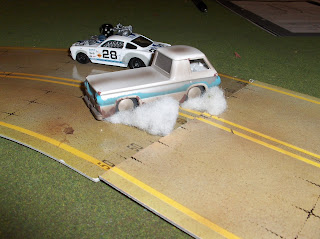 Dodge spins out after pwnage by 40mm GL

Well, the game was short, anyway. I can see why DF wasn't a runaway hit for GW. For one thing, it couldn't have been comprehensively playtested. Despite the die roll upon die roll required for just about everything (something like 5 die rolls required to generate a random track section) it seemed like some basic concepts were just missed.

There were a few thoughts I have for future games:

1. It's gotta be harder to hit things. The ranges in our game was often 2-3 spaces which means a base of 2+ or 3+ on a d6. If the weapon is turret- or hood-mounted that's another +1, plus the base accuracy of the weapon (+1 for an MG) and it was often the case that a miss occurred only on the roll of "the Scottish number". Look, with dudes flying along the post-Apocalyptic highway at 70mph+ it's gotta be harder to hit than 5 times outta 6. It just does.

2. Weapons can't be allowed to fire in every phase of the turn. (In DF the turn is divided into 6 phases, and cars move in up to all 6 of them, depending on speed - basically a car moves in every phase the value of which is less than the car's speed in mph divided by 20, rounding up. A car going 70mph moves in phases 1, 2, 3, and 4; a car going 20mph moves in phase 1 only; a car going 110mph moves in all 6 phases, etc.) HOWEVER a car can take an "action" (e.g. firing a weapon) in EVERY phase of the turn in which ANY car moves, regardless of whether it actually moves itself. For example, if a duel involves a car going 20mph and one going 120mph, each car could take 6 firing actions in the turn. I would change this to provide that a weapon can fire only once per turn, save lasers which would be limited to one shot every two turns.

I think that these changes would prolong the game somewhat and make it alot more fun. I guess we'll see next time we play, probably a rematch. Maybe the KC boys are headed back to salvage the wrecked Dodge when they encounter the outlaws again?

RE: "To Hit" rolls: How about a negative modifier of "-1" for every 10 MPH difference in speed between firer and target. A natural "6" on the D6 would still automatically hit.

For example, Mouldy is going 100 MPH, trying to catch up to a KC coupe. The KC car is traveling at 80mph. So, if the KC turret gunner fires at Mouldy, he fires at "-2" in addition to any other modifiers.

This would encourage cars to manoeuver tactically, and to try and match speeds.

Thanks for the blast from the past! Used to have a real soft spot for this game, although it really needed the expansion pack (white line fever I think) and campaign rules from WD to really work.