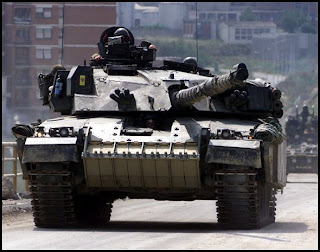 BAOR to Warpac - bring it on, proleteriat!

Tonight we'll be playing 6mm World War Three, using a modified Epic 40k rules engine. The level of abstraction will be the same as Spearhead - each base will represent a platoon, and the infantry and IFVs will be based together.

The modifications to the Epic 40k engine will have to do with the use of ATGW - thinks like TOWs, Milans, Spandrel's etc. Unless the unit is a dedicated ATGW vehicle - like the BRDM missile carrier for the Soviets, Swingfire for the Brits, attack helicopter etc - ATGW can only be used on Overwatch.

Also, mindful of some recent commentary that artillery is apparently not "deadly enough", we'll try to fix that a bit! And if "Chemical Cam" is able to make it to the game, watch for some provocative MAD action. To keep the arty in check, Forward Observers will have to be used - unlike Epic 40k where the guns let rip on anything the player can see on the table so long as they roll a successful sustain fire order.

Other hints for tonight's game? Well, what would NATO be like if the war at sea did not proceed with Tom Clancy, towed-sonar-array precision in NATO's favour? How much fuel and ammo would those Challengers have left three weeks into the fighting? And given the fine reputation of British manufacturing, how would those Challengers do in a real shooting war?
Posted by Greg B at 8:52 AM