Painting Daydreams for 2009 (sorry it's so long) 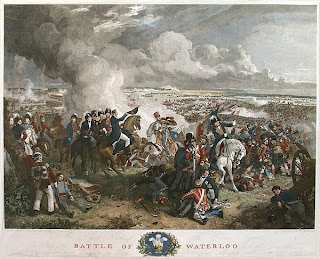 As the year draws 2008 to a close, it's time to look ahead to 2009. Since it will be the 200th anniversary of Napoleon's 1809 campaign, which featured many cool battles, I expect Napoleonic painting will loom large, especially now that my modern stuff is quite loaded up, and my anime-games are in good shape, with solid collections for Robotech and Gundam that can be enhanced with small one-off projects.

Of course, the last thing that anyone would ever think as they observe my varied collection of gaming figures is "this guy really sticks to a plan", but it's still fun to pretend.

So, a few "resolutions" for painting in 2009, listed in order of importance:

1 - 6mm Napoleonics - painting them for my friend Curt as part of a trade for his 15mm French Collection. Curt has the merciful patience of a Saint on this, which means I owe him a bunch of Grenzer and Austrian line. Watch the blog progress photos (aka: evidence of progress)

2 - 28mm Napoleonics - of couse, I have a collection of Austrians and French in 15mm, and Dallas has French and Russians, so it is perfectly logical that I would invest time and resources in a difference scale, right? Screw logic! Especially after getting some Perry plastic French for Christmas!

I have nearly completed my first unit, based in a conventional style of 3 40mm x 45mm bases with 6 men each, for a total of 18 figures per unit. The skirmishers are being done individually on 20mm square bases, where they can be collected together for Shako, or used indivdually for skirmishing.

And I still have a ton of Austrians from Foundry, where I am experimenting with some more exotic basing standards that may enhance the look of the unit and make them more fitting for skirmishing as well. On the downside, it means many, many soldiers per unit - I may collapse and just do some "standard" based Austrians as well.
Anyone who has experienced that slight and immature pleasure of realizing other people are sick too will understand that I am pleased that this plague has spread to Dallas, who is now in posession of Victrix plastic Brits. Maybe if we both go bonkers, we can prepare for a peninsular-type Shako game in 25mm - that would be awesome! Now to target Mike...

3 - 15mm 8th Army Brits - for about three years now, I have been in posession of some DAK in 15mm, ready for action. I have a force of Brits ready to take them on, but they are heavy on tanks and light on other things (like infantry, and MGs to back them), with two pathetically under-supported lorried infantry platoons. I recently ordered and received another infantry platoon, some mortars, Vickers MGs and 2- and 6-pounder anti-tank guns. Time to work on those so the poor 8th army lads have some help against Rommel's troops.

4 - 6mm US WW2 Americans - for many years, (back to the time Curt got me interested in Spearhead) I have sat on a few packs of American kit. Well, it's rolling out now, and just needs some more mechanized guys before they are ready to fight! Already complete: 1 infantry battalion, 1 57mm ATG company, and 1 Sherman tank battalion. Due up for completion - 1 (or maybe 2) infantry batallion(s) in M3 Halftracks, another Sherman battalion, and an M10 tank destroyer battalion.

5 - 6mm WW2 Russians and Germans - my collection here is strong, but geared to late war (44 and 45, which is great fun). I'm trying to expand it to earlier war periods (42 and 43). That means more BT-5s etc. for Russians, and more Russian infantry, as well as some new infantry and more early mark panzers for the Germans. My current 6mm German infantry is primarily GHQ (which make great tanks and dreadful infantry) and I'm working on adding more Adler figure units (which look awesome!).

6 - 25/28mm Modern - continued expansion here - I have some Brits from Mongrel (geared to 70s, early 80s) that I would like to provide some action, just need to add another couple of sections. I may also get some 1/56 scale T-72s to give some armour support to the other 1/56 scale elements of my collection. For more "ultra" modern, I have some Kitech T-90 kits to finish, and I am experiementing with a way to create a "Black Eagle" for this scale, which would be fun to roll out. Plus, I hope the Imprint guy comes out with some new Soviet armour kits, because his 1/50 stuff fits with either 1/56 or the (alleged) 1/43 from Kitech.

7 - 6mm Modern - once more, continued expansion. I am working on models to represent the current prototype for Russian vehicles, like the "Black Eagle" tank, the BMP-4 and other cool looking monster things that Putin can design but can't buy to chew up Mike's new 6mm Brits! Also, will add new units for Arab-Isreali conflicts, like Isrealy mech infantry in M3 halftracks, and a batallion of M-60 tanks. Plus, I need to do a couple of planes - an Su-25 for the Russians, an Su-27 for the Arabs, and an F-4 to support my Israelis.

Random Priority - New 40k stuff - I hear rumours that the GW dopes will be re-doing the Imperial Guard codex, and may issue some new plastics, and maybe new plastic storm troopers. It's probably too much to hope for a re-issue of the regular plastic troops (which I don't care for) but plastic storm troopers would give me a chance to round out my Cadian Grenadier force.

Total Long Shot - 6mm Seven Years' War - in my collection, for some reason, I have a package of gorgeous 6mm Adler figures labled "Leuthen Battlepack" (apologies to SYW folks for any typos in the spelling) that appears to have everything I might need for a little (literally) smack down. I know little of the SYW, nothing of the battle of Leuthen (sp?) or any rules for the period, or any uniforms, and besides Brian has a stunning collection already in 15mm making this effort pretty redundant, but I've been known to snap before and just try something new for the sake of it.
And, of course, last but not least, pressure Cam to ensure his figures are ready for that Con in the spring! Otherwise, the poor will suffer (see previous posts).

So anyway, that's all I can think of. what about your plans? Let's hear them, so we can pressure you to follow up, salute you when they are ready for action!
Posted by Greg B at 10:23 AM

Email ThisBlogThis!Share to TwitterShare to FacebookShare to Pinterest
Labels: Painting

OK, let's get one thing straight right off the hop. This is not a "resolution" or anything like it. Just sayin' what I realistically want to get done this year. Here goes...

1. Victrix 28mm plastic Napoleonic Brits. I've had static from my Dear Wife before on delays in painting the presents I've asked for and been given. For example, this Fall I finally painted the Artizan Fallschirmjager she'd given me for my birthday in 2007 (or was it Christmas...?) As such I want to get a strong start on the Brits I'd asked for and was kindly given this year. And the second box of 'em that came from Greg was most welcome too (thanks again man!)

2. Artizan WW2 US infantry / paratroops. I have a bunch of Artizan infantry in greatcoats I've had for a couple years that will not take much time to finish. Ditto a few paratroopers that missed getting painted in the Great Paratrooper Painting Spree of 2007. Once the former are done we can do some Bulge gaming which will be cool.

3. A slam-dunk (I hope) - Pig Iron Kolony Militia. These guys will be painted to use as Red Blok infantry for AT-43 games and should go up fast. I'll be converting one to a standard-bearer which should be a fun mini-project, watch this space...

4. SAS/LRDG from Battlefront in 15mm. These guys will be an "opfor" for Greg's Afrika Korps. I picked up both "The Sting of the Scorpion" (LRDG) and "Who Dares Wins" (SAS) boxed sets recently in a trade, and had a few LRDG trucks already so all I need to do is assemble and paint them.

5. 40mm modern Chechens/Russians. Maybe 20 of these chaps to paint and then we can find some detailed rules to use for intense low-level skirmish action.

6. Little Big Horn project. Lots of 7th Cavalry and Indians to finish up for this period. Probably not a giant priority as I missed the big "anniversary" in 2006... but 2011 isn't that far away either...

How I'm gonna do all this in 2009 while still taking the necessary time to hone my skillz at Rock Band I cannot say.

I think we should also target 2009 as the year we pull Mike into Napoleonics...he's already made so much progress moving away from 40k...

The Tau need to get painted up, and then it'll be time to clean out the closet of random GW stuff.

I have some older plastic Chaos Knights I just found, and a bunch of random Dark Elves that I should paint up, followed by a Balrog and some Moria Goblins that are lying around. Then, assuming we're not into 2010 by then, the Imp guard figs and Necromunda figs that have been sitting cleaned, but not assembled, for many months.

So, in other words, the Tau and maybe like, 15 other models depending on how much I procrastinate.

1. Crimsonwing Terminator army - 1500 points. I just received the new Death Storm drop pod from Forge World, so now I have all the models and parts to do every unit. I want them ready for Mechani-kon, Astronomi-con Toronto, and Astronomi-con Winnipeg.

2. Bolt Action 28mm Finns. A complete 1939 rifle platoon, plus some attached heavy weapons. I got a Skirmish Campaigns scenario book and everything.

3. 15mm Soviet tank battalion for Flames of War. How hard could it be? Some tanks and armoured cars, all in Russian armour green. (Yeah, we've all heard that before.)

4. After that, (2010?) maybe some 15mm Xyston Spartans for DBA. They look like 25's. Even their leaf-bladed spears are wire and in scale. I got the shield decals from Little Big Men. Very nice.

It is hoped that my list will hold Greg off on the Napoleonics.

1.6mm Warriors for for my modern brits. These will be for spearhead games.

2. 28mm Aliens project using the 5150 rules. Not many models, but terrain may be tricky.

3. Fallout skirmish. Savages and Scavengers from EM-4. I still need to get a giant scorpion and Super mutants.

4. Ultra modern. I have 2 squads of Russians with transports and tanks. I also have a squad of Germans with their vehicles.

5. WWII Russians and Germans. Still need to finish a couple squads and vehicles for each side.

Mike - no chance. Prepare to enter Napoleonics. I recommend you start looking at the different 25/28mm sculpters and see which one you like....it's just a matter of time!
BWAHAHAHA!!