Nazgûl! - Ringwraith on a Fel Beast

After the massive Uruk-hai project I needed a change of pace to something a bit quicker. Almost a decade ago I bought a used Games Workshop 'Ringwraith on a Fel Beast' off of eBay. It was very cheap as it had experienced some battle damage, and it needed some repair to get it 'shipshape and Bristol fashion' once again.
The first problem was the wonky base. It had a crack in the rim, and it wobbled a bit. I took some 3mm polystyrene card, cut a circle of the correct size, and glued the base to it. This made it sturdier, and solved the problem of the wobble.
The second problem was all the broken bits. The plastic wings no longer had the posts attached that originally fit into sockets in the metal torso. One was missing completely, while the other was stuck in the socket. Also the right wing had three of its 'spiky bits' broken off as well. The seller had sent all the broken pieces, but I didn't think glue would give a strong enough bond to hold them securely. And lastly, the ringwraith's sword was broken off. It was time to use my combination of floral wire and epoxy putty to replace the broken off pieces, including the posts that were on the wings.
The final problem was the buildup of layers of glue where the wings fit on the torso. The previous owner had glued the wings in place multiple times, so it was no longer possible to produce a good bond. I scraped most of the old adhesives off with an X-Acto knife, then used a wire bristle brush to clean the metal torso further. Finally all the surfaces were cleaned with some isopropyl alcohol to dissolve away any remaining residue.
I used super glue to affix the neck to torso, and to attach the tip to the end of the tail. 5-minute epoxy was used to attach the wings to the torso to make sure there were no gaps as the surfaces were rather uneven. Once the epoxy had set, I used some more epoxy putty to smooth out the area around the joints. The final building phase was to do the ground work on the base. The figure is cast with a section of damaged wall that has a discarded Gondorian helmet beside it, so I went with that theme and did the base in same style as my Minas Tirith miniatures - paving cut from plastic card, bricks cut from sprue, and coarse sand for rubble. Everything was allowed to cure overnight.
The model was primed black using a rattle can, and then painted with Vallejo acrylic paints using a lot of drybrushing, especially on the wings of the fel beast. Here is the final result. 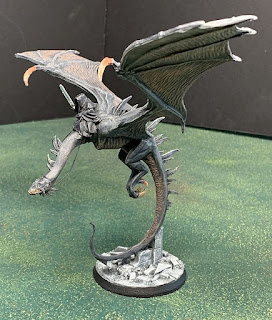 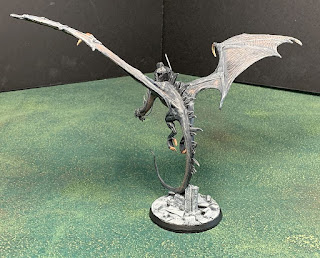 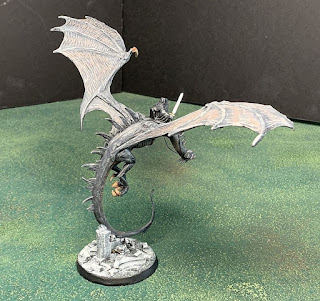 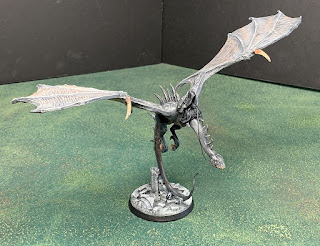 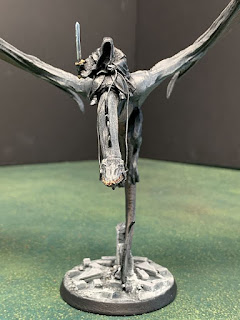 Thanks for reading. Stay safe and healthy. Hopefully we will be able to gather around the gaming table soon.

Posted by FrederickC at 4:26 PM

Fab work dude. Love these creatures they look so sinister.